It's been a while since I posted. It's been busy here, and just recently, we lost two good friends. But I am ok, and actually have a finish to share. It was started long ago which you can probably tell by the yarn! And it's done at last. Hurrah! 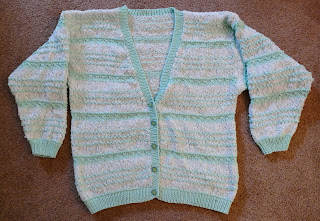 This past week we went back to one of our favorite spots to celebrate my birthday. It was extremely low tide at Cannon Beach, OR, which was really interesting. 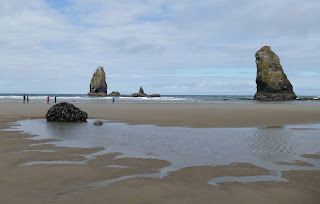 The closest rock was covered with barnacles, and we saw lots of them everywhere. The ranger told us that because there are so few starfish, the barnacle population has exploded. 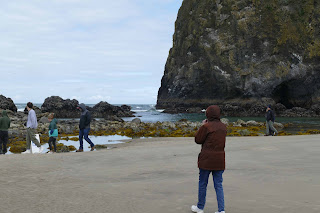 I don't think we'd ever gotten this close to Haystack Rock.

It was fun to see sea anemones up close. 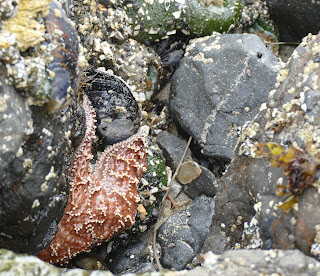 This starfish was tucked under some rocks. There used to be starfishes everywhere, but now they are hard to find. The ranger said they are making a comeback though. 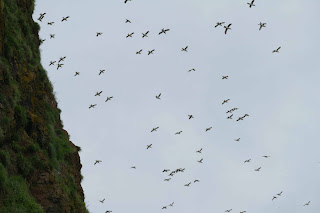 That's it for now. I will try to post sooner next time. At the moment I am doing the Miss May KAL which is keeping my needles busy, but I actually need to finish something else soon. Have a great week!

Im sorry for your lost.
Your finish is lovely, and what a great way to spend your birthday. I love the pictures you share of this place! I hope to see it in person one day

sorry for your loss but glad you had a nice time in Oregon! Congrats on the finish...it looks great!

I'm so sorry that you've lost two of your friends. Too many people have had unexpected losses in the past few years.
The sweater is lovely. Is it for someone special?
I miss the Oregon coast so much, including Cannon Beach. We had hoped to go this summer but the cost of diesel is going to stop us in Spokane. I doubt if we'll drive any farther west this year. We are planning to head there next month. We're so excited to see our friends. It's been over a year since our move and we're homesick for the beautiful northwest. Especially days like today and the past week when the "feels like" temperature has been well over 100F. It was 106 today.
Take care and it was good to see you post.
Blessings,
Betsy

What gorgeous scenery! Your photos always amaze me.

Happy Belated Birthday! You found a wonderful place to celebrate your day.

Belated birthday greetings! The coast is so different from my FL one! lol
Beautiful to walk among the giant rocks!

I'm so sorry for your losses.

The baby sweater is cute.

I'm so sorry for your losses. The sweater is adorable and thank you for the walk about at the shore!!

So sorry for your losses. Yeah for your blog post. The sweater is very cute. The beach pictures are amazing. Happy Belated Birthday. Glad you were able to get away and celebrate. Looks like you had a very good outing.

Waving hi as I make my blog rounds.