Flora and Fauna at the Beach

In roaming around the beach in Oregon a few weeks ago, we stumbled across some interesting plants and animals. Some were not too surprising like the herd of elk in a field near Seaside while others challenged our identification skills. This piece of driftwood was covered with what looked like shells. Upon a closer look, we saw that many of the shells had an odd protuberance which was moving! When we got back to our condo, we discovered an article we'd saved that provided the answer: razo clams. 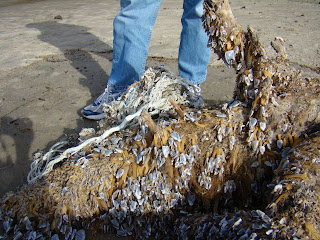 Razor Clams
On another walk, we found some interesting and very colorful mushrooms. In searching the Internet, I think they are a type called Amanita muscaria and while beautiful, also deadly. 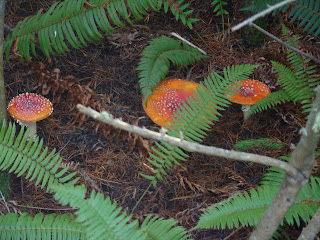 Amanita muscaria
The tide was very high this time, and as a result we saw lots of critters that were stranded on the beach, including this poor jellyfish. 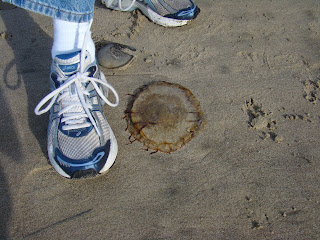 Doomed!
Cannon Beach has rabbits everywhere! Last summer we read in the local paper that the bunnies are all related to a pair of rabbits that were set loose over 30 years ago. Where we stayed was quite a ways south of our normal bunny sightings, so imagine our surprise when we saw this little guy (gal?) in the bushes outside our condo! 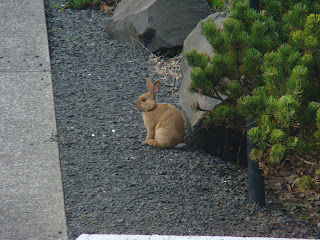 Flopsy or Peter?
When we were up at the Astoria Tower, we could hear barking off in the distance, and sure enough, right near the cannery a number of sealions were making their presence known. I stopped counting at 30! They were lounging on a pier and quite particular about letting any new residents join their forces, shoving and barking loudly to keep their spot in the sun. 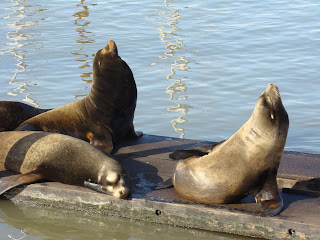 This is my good side, I think.
While we go to the beach for recreation, we are always aware that the ocean is a place of commerce as well. We enjoy listening to the daily shipping reports and watching the variety of vessels off shore. I can remember long ago reading about the mighty Columbia and the vast Pacific; it's quite another thing to see them first hand. 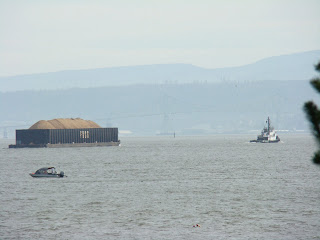 What has life been like with two cats, you ask? Well, at first Ginger refused to even walk down the hall next to the room where Mocha was housed. (All the books said to "take it slow.") When I carried her down the hall, she would hiss at the door. She was curious though and soon we were able to let Mocha out for a short while. As soon as one of them started to hiss, Mocha went back to her room. 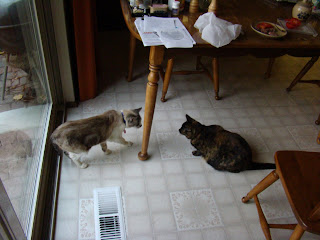 Confrontation
It's been almost a month now since we brought Mocha inside. She has filled out nicely and no longer eats like a little vacuum cleaner. Ginger and she are slowly becoming friends. A couple of days ago I was reminded of the time long ago, way before carseats were required for kids, when I was the "human barrier" in the back seat of the car, . Someone sat up front with Dick, and I sat in the back in the middle, keeping the peace. And here I was back in my role, only this time with furry "children" on the futon. 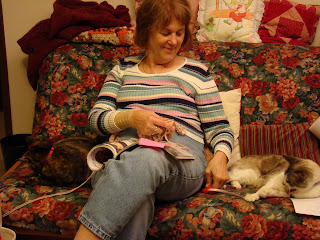 The Human Wall
Now, however, they've been inching closer with only an occasional hissing match. It will be interesting to see what happens next! 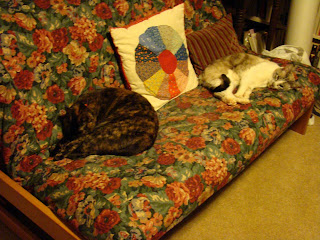 Catching Up with Noah

Retreating to the beach is a great way to get caught up with all kinds of projects. I finally finished October's Noah BOM and most of November's. That one got the last few stitches here at home. Cannon Beach offers no distractions other than gorgeous views and invitations to go walk the beach. In between is lots of time for stitching and reading. 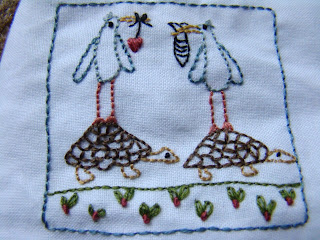 October BOM
Oops, one big distraction I forgot to mention is SHOPPING! But after a trip to the yarn and quilt shops for me, and the bakery for Dick, we settle in and enjoy the peace and quiet. 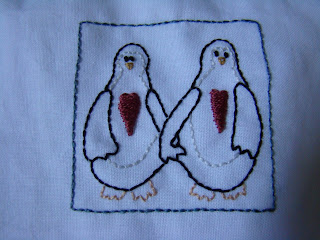 November
Sorry Kris, but you're way ahead on the borders! See the link on the sidebar for these fun and free patterns by Lynette Anderson. Gotta run.... It's time to finish the Cranberry Fluff salad for our dinner. Happy Thanksgiving!
Posted by Judy S. at 9:32 AM 7 comments:

Annalise, my sister's fourth grandchild, was born on the eve on the Presidential (actually she was born in the morning that day!) election, November third. Isn't she a sweetie, and doesn't Gramma Jane look pleased? 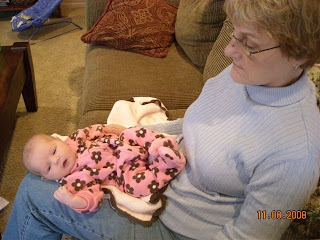 Gramma Jane and Annalise
I finally got this sweater put together and mailed with Dick's help. This is one time I was really glad that the ultrasound was correct....don't know what I'd have done if it hadn't been. This sweater just wouldn't work for a little boy! 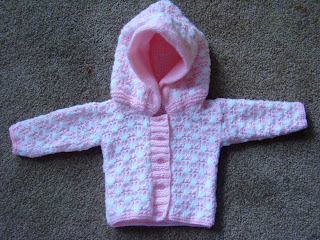 Thinking Pink
Annalise is our seventh grand niece! She joins her sweet sister Chloe who is almost three. (We also have 3 grand nephews.) 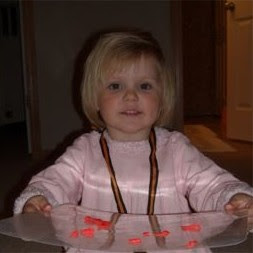 Last week, since we didn't have to sing on Sunday, we spent a long weekend at Tolovana in Cannon Beach, Oregon. The weather was amazingly balmy, better than any previous trip. Due to the high tide, we couldn't walk out to Haystack Rock, but we did have fun exploring new places. 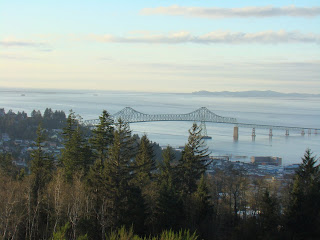 Bridge to Washington
The Astoria Tower is on a high hill overlooking the Columbia River and affords some great views in all directions. The tower, temporarily closed for repair, is an interesting structure which tells the history of Oregon through beautiful scraffito carvings. 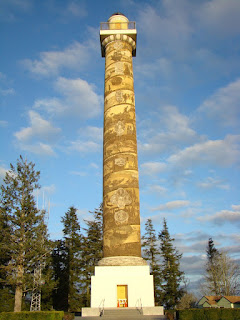 Astoria Tower
The mouth of the Columbia is a dangerous place. A plaque says that over 2000 ships met disaster in its currents. The rusted remains of the Peter Iredale which was beached in 1906 can be seen poking up through the sand. 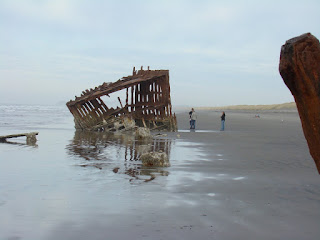 Peter Iredale
We took lots of walks on the beach and even encountered a little girl in a bathing suit who was rock-collecting. My rock-collecting attire included a hooded jacket! 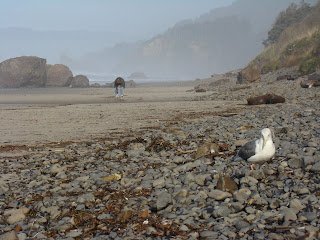 Rock Collecting
The tide was too high to walk on the beach at Hug Point, but we were treated to a beautiful view of the trees in the sunlight instead. 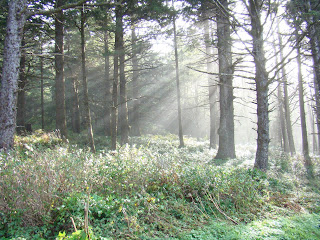 Hug Point
Without the distractions of technology, we also get a lot accomplished in the evenings....the Christmas card envelopes are stamped and addressed, and I finished several projects and a book! And oh yes, there's a great quilt shop and a yarn shop in Cannon Beach, my idea of an ideal place to visit! Four days weren't nearly long enough!
Posted by Judy S. at 3:59 PM 7 comments:
Labels: photos, travel

Kathy gave me a Bookworm award and guessed that the closest book to my computer would either be a knitting book or a children's book. Well.....it just so happened that she was almost correct. The mail, which I was opening, had just arrived and in it was a new (to me) Maggie Sefton knitting MYSTERY, A Killer Stitch, part of a newly discovered series I've been reading lately. As an added bonus, each book includes a knitting pattern and a recipe! As for the fifth sentence on page 56, it is: "Curt rested one leg on his knee." And he continues to say, "Kelly, I've decided to proceed with the same plan, only go a little slower. There's no need for us to sell what's left of the herd right away." To find out what in the world this has to do with knitting or a mystery, I guess you'll just have to take the plunge and read the book, too! And if you feel like participating in this challenge, go right ahead and grab the nearest book, check out page 56, and post the 5th sentence and a few of the following ones on YOUR blog. 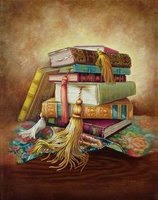 And while you're doing that, I'm going to add a crazy photo we took last summer at Yellowstone. I'll bet you didn't know about this alien sighting! 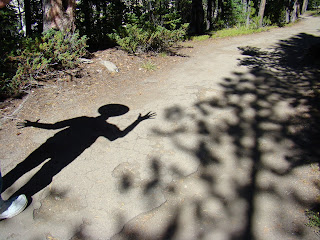 One of the projects that I worked on in Chicago and haven't finished is a heart sachet; the pattern was a free download for a time on Knit Daily and, I think, was once featured in Interweave Knits. It's a fun little project, and all I have left to do is to stuff it with lavender and sew it up. There are 3 others, too! 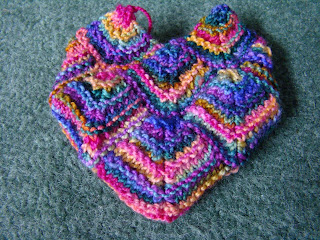 Eventual Sachet
We are headed off to Cannon Beach, OR, this morning, so I thought I'd include a couple of photos left over from our visit to the Botanical Gardens in Chicago. If you're ever anywhere even close, it's worth a visit to see the ever-changing exhibits. 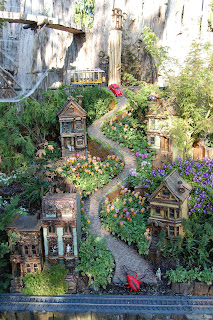 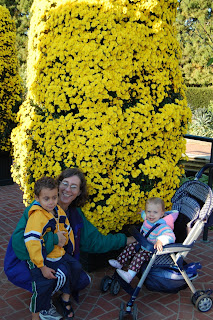 Flowers and Family
Posted by Judy S. at 9:31 AM 7 comments:
Labels: family and friends, knitting

We are having a spell of warm and mostly rainy days, a "mini-pineapple express" according to the weather folk. Today though, the rains haven't yet appeared, so we snuck outside and finally planted some daffodils (to fool the squirrels) and tulips. Generally the squirrels take note of this event, thinking that their gourmet restaurant is back in business, and devour the tulips immediately. Hopefully, the daffodils will ward off the little thieves. At least the bag promised that they are "deer and critter resistant." Time will tell. The trees are dumping their leaves at an incredible rate; Dick's been raking daily. Our backyard is still pretty greeen, and in one spot the beauty berry reigns supreme. 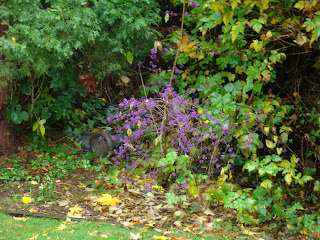 Beauty Berry
With no snow in sight here, thankfully, I've been trying to find a few easy projects for the antepartum ladies at our local university hospital. These are women confined in the hospital thanks to a pregnancy that's become complicated enough to require hospitilzation. (One woman came up here from CA in July for a wedding and was finally allowed to go home about a week ago....with a healthy baby boy.) Knitting helps the moms-to-be pass the time in addition to allowing me a very fun volunteer opportunity. This pattern by Chris de Longpre caught my eye; next I'm going to try an ornament, a tree pattern, which I found online. 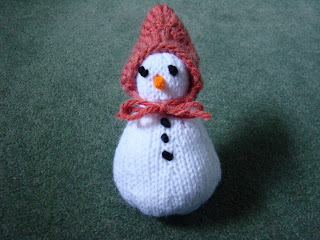 On Halloween we made a big decision: we rescued a kitty that we'd seen around our house all summer and who'd been a more or less permanent resident of our backyard since we got back from Chicago. Since the temperature was dropping and the rain moved in, and I discovered that she'd been declawed and was therefore defenseless against the raccoons, we took her in. The vet discovered that she has an unregistered microchip, so we now have a second kitty that's terribly thin but happy to be dry and warm. Ginger, however, isn't sure about this interloper, but hasn't hissed at all today. We're still keeping them separate but hopefully soon they'll get along! 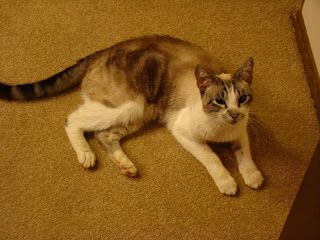 Mocha
After the rains quit this afternoon, we went for a walk and finally remembered to take the camera. The specific tree we'd hoped to capture didn't have a single leaf left, but this one more than made up for that. I don't remember a fall as beautiful as this one! 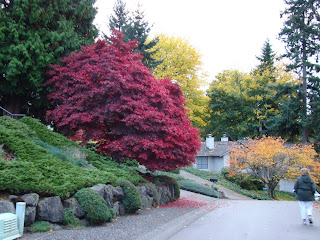