Happy April!  I sure don't know what happened to the rest of March, but we've had some busy days so far this month.  Lots of choir singing is coming up this week, that's for sure.

Even though it's spring,  a cowl can come in handy as it's been cool and rainy here.  I gave this one to a friend.  It's another Interrupted Cowl with a different shade of Bamboozle called Inferno.

Two sets of our friends gained another grandchild late in March, and so I whipped up some booties. Thankfully I had some Plymouth Angora on hand in the right colors! 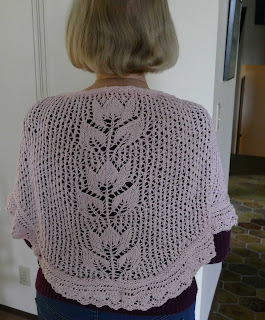 For almost six weeks I've been working on this shawl that I started long ago. It's probably the most complicated thing I've ever made.  First you knit the edging. Then starting in the middle of the edging you begin the rest of it, using short rows to attach the rest of it which is knitted from the bottom up.  Believe me it's easy to get off between the lace and the chart!  And lots of "tinking" happened in the process.  At the moment it's being blocked, but the photo was taken before I did that. Yippee, it's finally done and I'm keeping it! 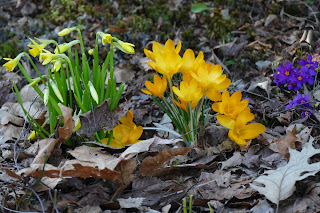 All the leave you see in these two photos have been raked up on the few sunny days in March and most of these flowers are done already. 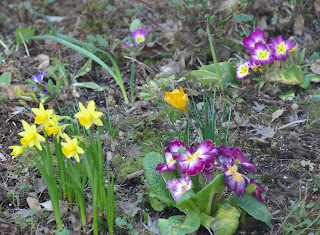 These favorites though are out now and will soon be joined by azaleas, rhododendrons, and camellias.  Oh, how I love spring in the Pacific Northwest! 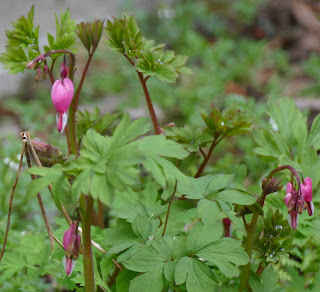 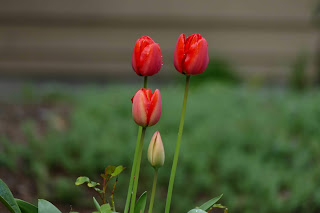 If you celebrate Easter, I hope you have a happy one!  And a Happy Spring to everyone!
Posted by Judy S. at 8:21 PM 15 comments:
Newer Posts Older Posts Home
Subscribe to: Posts (Atom)