The End of November? Yikes!

December will be here shortly, so it's time to put away the Thanksgiving/fall decorations and get out the Christmas things. But first, I had to show Linda and Gene that we actually used their wild gourds, which were hand delivered by Patti, on our Thanksgiving table. Amazing how the camera picks up the crooked candles which I really thought I'd straightened! 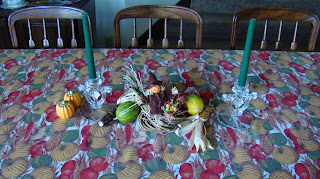 Since yesterday was my sister's birthday, I can finally show my finished mystery Socks which she says fit just fine. I really like this Through the Loops pattern and will probably knit it again in a solid color so the pretty pattern shows up better. 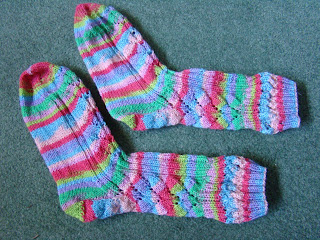 Yesterday Jill sent a couple of photos of the grandkids using the "city map" quilt that I made a few years back. She said David and Sophia had fun playing on it, and it's always nice to hear that something you've made is being used 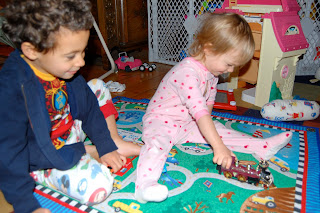 And even Daniel seems to be enjoying the quilt/map. He sure has gotten a lot stronger these past few weeks! 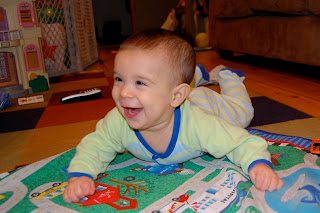 "I am going to be on the move very soon!"
Posted by Judy S. at 2:45 PM 9 comments:
Labels: family and friends, holidays, knitting

Lots of projects are happening here but since some of them are gifts, I can't show them now. Fortunately Jill sent me these photos of Daniel and David modeling some of my creations. 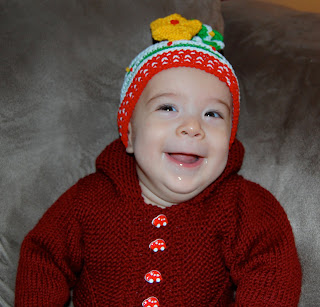 Our Happy Boy!
Doesn't Daniel look cute in that hat? It's a good thing the sweater was finished and delivered in October because he is growing so fast that this won't fit very long.

Since chilly days have returned to Chicago, David has rediscovered his dinosaur sweater and pronounced it, "The best sweater in the world." Thank you, David! 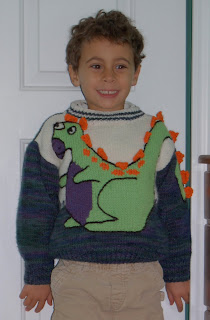 
Better late than never, my TUSAL jar really does have something other than yarn in it. In fact, in this photo you can see a piece of boning from when I made a nursing cover for Jill. And squashed in between the yarn are snippets of embroidery thread from the Gail Pan Christmas BOM which isn't going to be done this year even though it's coming along. Two family weddings in the spring of 2010 (our younger daughter and her cousin, our only niece) are going to turn my creative efforts in a different direction come January. 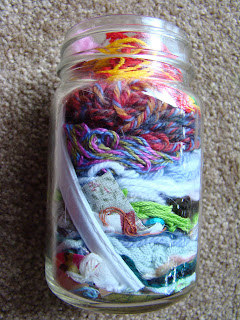 Just about a week ago the mailman brought my CQ purse back from its visit to Janet's house in Colorado. Oh my, what beautiful stitching she did! It was fun looking back at my "before" pictures because I couldn't remember how it looked and what I had done, so I will show both here. My next step is to sew the pieces together and line the whole thing. Another project! 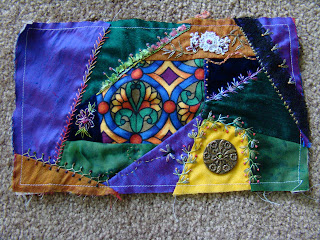 My Stitching on the Front 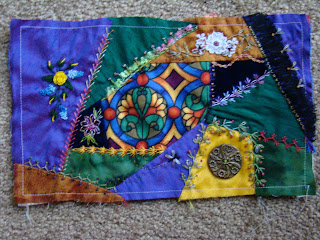 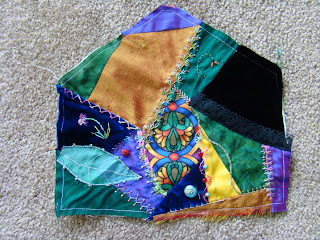 My Stitching on the Back 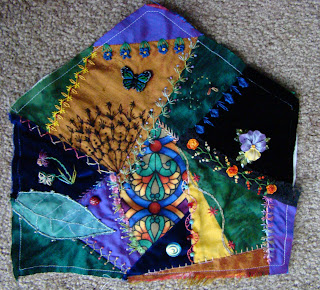 A great little shopping adventure with Sharon inspired me to put the finishing touches on Janet's purse, and she let me know that it arrived safely back at her house this week. It was really fun to finally meet Sharon, and besides boosting the economy with our visits to THREE stores, we enjoyed getting acquainted. 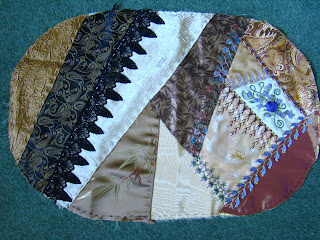 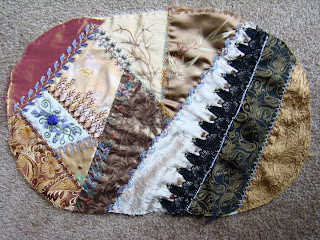 This was a very fun swap, and it is really nice to see another person's stitching up close, especially Janet's as she's a pro!
Posted by Judy S. at 5:53 PM 14 comments:
Labels: crazy quilt purses

Just a bit over a week ago we were on a plane headed home after ten days of fun with our Chicago family. Before we get too far into November, I have to share a few more photos of our fun. Dick had a lot of fun with the boys every morning, and I, not being much of a morning person, had my fun at night. 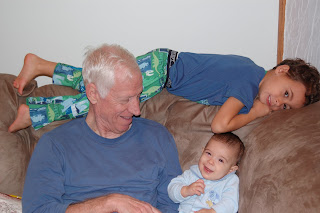 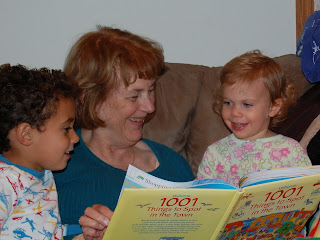 We left Chicago just before the Halloween festivities began and received these photos earlier this week. Unbeknownst to his folks, David planted a whole bunch of pumpkin seeds which grew into some pretty impressive pumpkins. They had fun carving them and saved the seeds for next year. 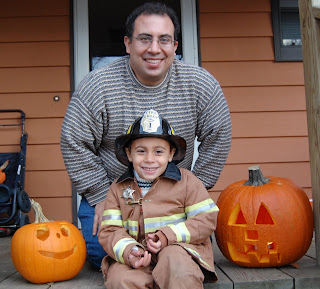 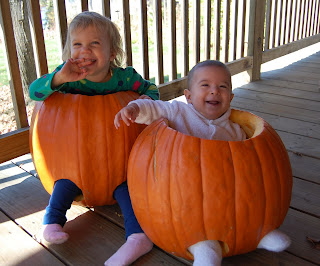 
Whenever we go to Chicago, we also try to zip up to Wisconsin to visit my aunt and uncle. This year my aunt made some of her famous dill pickles and saved me a jar. As you can see, Sophia likes them as much as I do, and Michael pronounced them, "The best pickles I ever had." I agree! 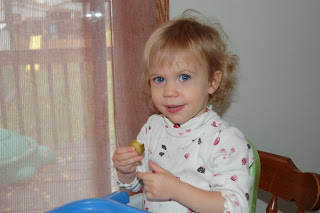 The other excitement while we were in Chicago included the arrival of Michael's Aunt Bonnie and Uncle Lee's first grandchild in Madison, WI. I made these little socks after we got home and must get them in the mail soon before Samuel outgrows them. 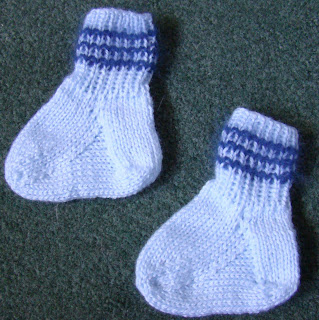 November first, how can it be? Last night we turned our clocks back after welcoming only one trick-or-treater, and a tiny one at that, to our house. It seems like such a short time ago that our neighborhood was teeming with kids who reveled in house to house visits. Yes, time has passed, and this year it has gone faster than ever. Exactly one year ago on Halloween we brought Mocha into our house. After living on the streets for who knows how long, she only weighed a little more than five pounds. Now, a year later, she's fat and sassy but still not sure whether she and Ginger can be friends. 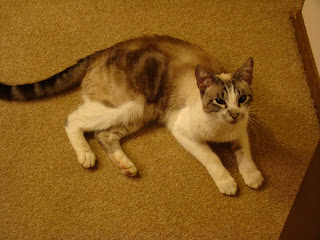 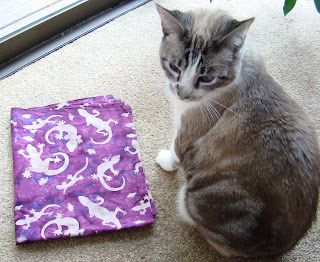 Even though we had an extra hour of sleep, morning seemed to come quickly and it was time to hurry off to sing in the church choir. Little did we know the treat that awaited. This morning Ross Hauck, one of the gifted tenors in our choir sang a solo that perfectly supported Scott Dudley's sermon on Moses. I heard Ross tell someone that it was on YouTube and found it. Enjoy, and may it touch your heart, too!