Precious little work was done on this pair of Weeping Angel socks thanks to a couple of other things that were keeping my needles busy. I do love the pattern, however, and it has the most intriguing heel, in case you want to try it. (See Ravelry) 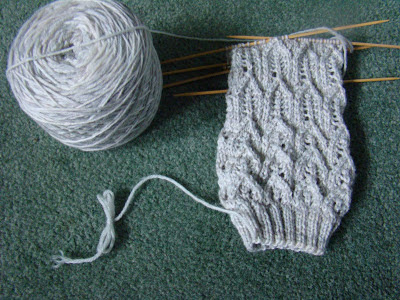 Two other pairs of socks came off the needles however! 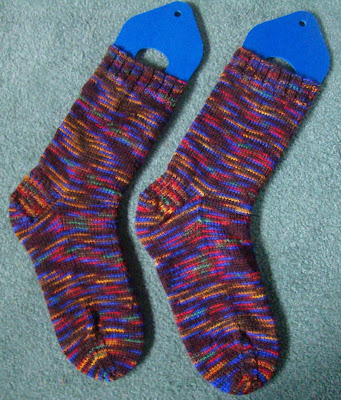 This is one of the projects that  captured my attention.  A "hairy" chemo cap for my choir friend who will be donating her beautiful hair to Locks of Love just prior to her treatment. 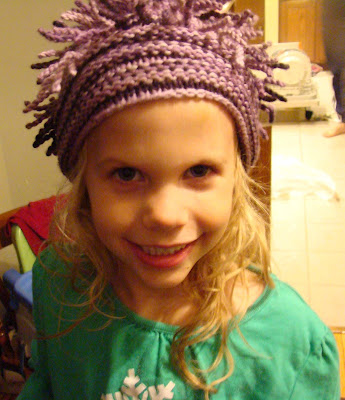 The Anenome hat was hand deliverd to Miss Sophia.  What a fun project that was!  Her brothers liked their hats too, but it's getting harder to capture them long enough for photo ops.......
Posted by Judy S. at 10:02 AM 16 comments:
Labels: grandkids, knitting

It's been a while since I last posted as we just got back from visitng the Midwest.  Lots of knitting happened on the plane and in the car: 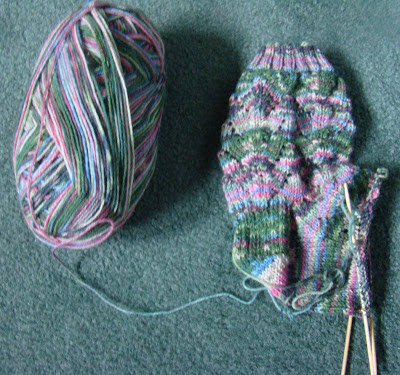 I got a good start on another pair of Dragon Fly socks using Opal's Feen & Elfen.  If you've not tried this pattern, I'd recommend it! It's a fun one. 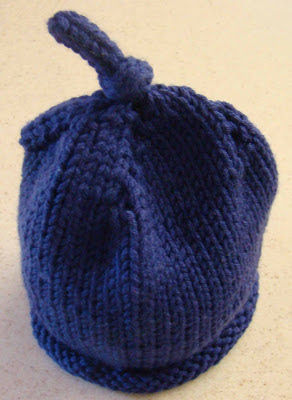 Several of us from my quilt group are knitting purple hats for the Don't Shake the Baby campaign during November and December, and I finished a couple of them.  You can find out more about it the program  here. 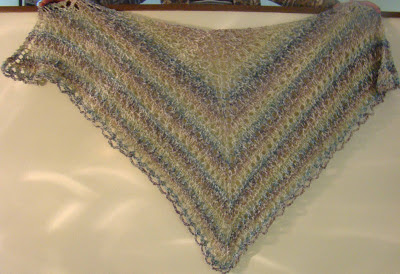 This is my go-to Prayer Shawl pattern called Easy Triangle Shawl. It was knit from Homespun for a choir friend who's just been diagnosed with breast cancer.  She told me last night that she loves it! 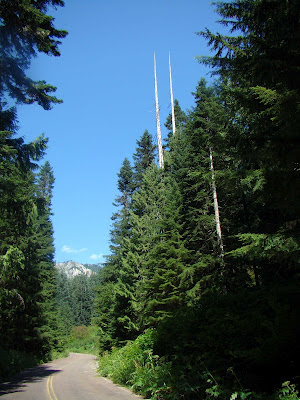 On a clear warm August day, we set out to explore the Old Cascade Highway in search of the town of Wellington, the site of a huge avalanche in the winter of 1910 that killed almost 100 people. 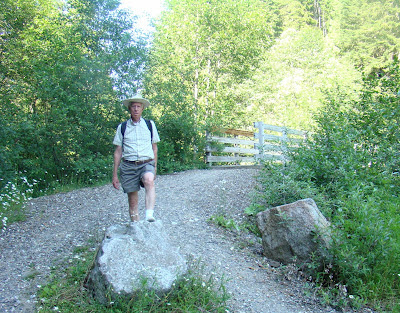 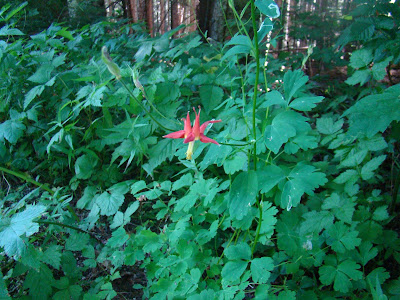 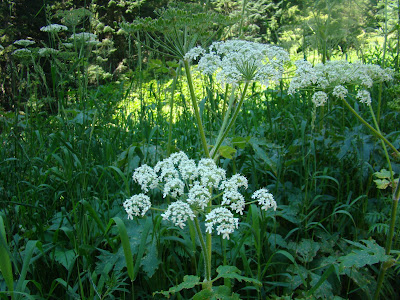 Cow parsnips were in full bloom all along the road. 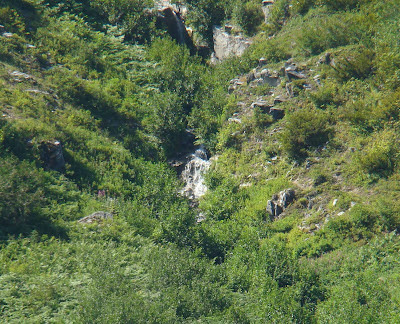 We even spotted a distant waterfall, 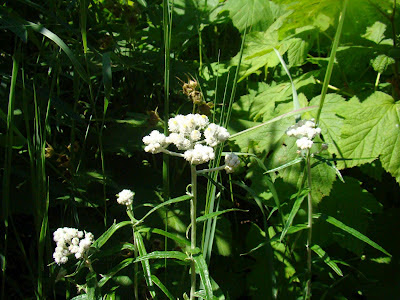 lots of pearly everlasting in bloom, and 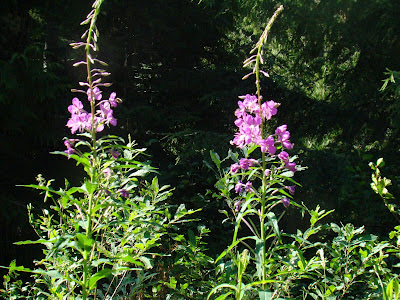 even a bit of fireweed. 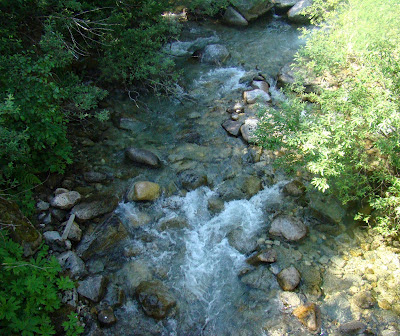 We found the Tye river and 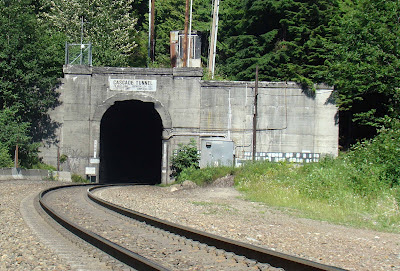 the currently used tunnel that was built to replace the tunnel near Wellington, but we did NOT find Wellington. 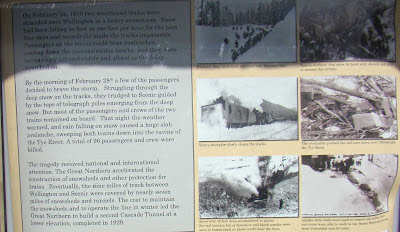 As we headed back home, we spotted the turn off to the Irongoat Interpretive Center, and voila! Here was the information we needed. 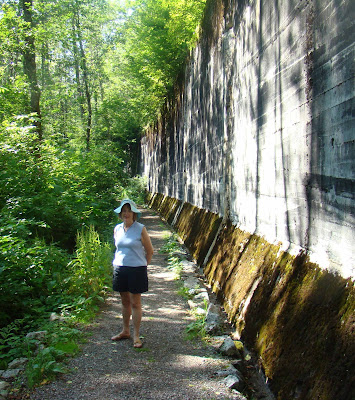 A short way down the trail was this old snowshed , one of many built to protect the train after the avalanche in 1910. 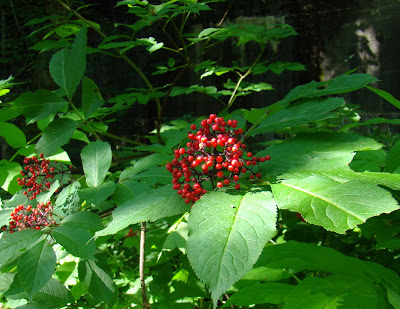 We found a few elderberries and learned that further exploration would have to wait since it was too late the hike the whole trail. 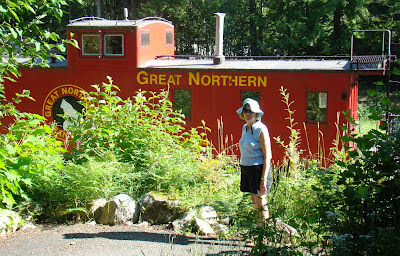 If your kids want to see a real caboose up close, this is the place to go! It took us two more attempts before we finally found Wellington. More about that another day.
Posted by Judy S. at 12:30 AM 7 comments:
Newer Posts Older Posts Home
Subscribe to: Posts (Atom)