We've been home for a week already and are getting caught up after being gone for 10 days. It was so busy in Chicago that after we got home, we realized we took very few pictures. Jill and Michael sent a few though which we can share. (While we were having fun in the Midwest, my sister and Ted were roaming around Europe with the Passion Play in Oberammergau their destination. Now they are headed to Prague, but this photo was taken in Heidelberg.) 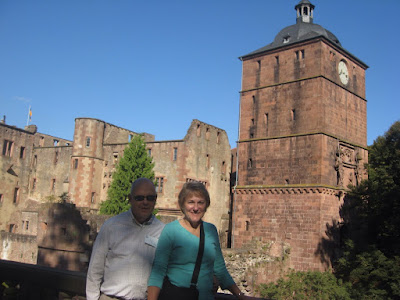 What kept us so busy? Well, we went to kindergarten with David one day and watched his wonderful teacher in action. We also helped by painting some rocks blue and white; these came home the next Friday as "peace rocks" as the whole school did a presentation with that theme. No photos unfortunately. 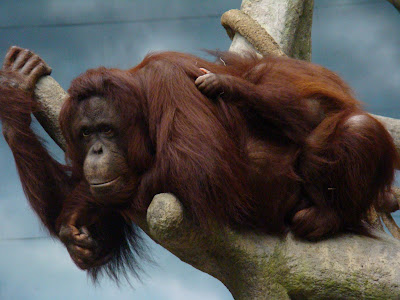 Can you see the baby? 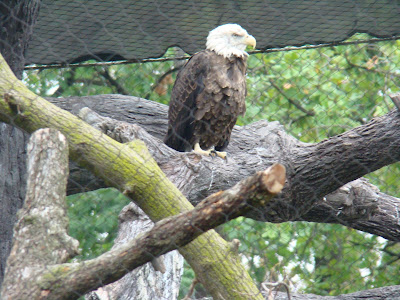 Isn't he a stately fellow?
We went to the Brookfield Zoo. (Does anyone remember Marlin Perkins and Zoo Parade from the Lincoln Park Zoo?) It started out very rainy, but that was great because it kept the crowds away, and we had a grand time. Dick got a couple of great animal photos, and I got to ride the Carousel with Sophia. We had read about one together, so I was delighted to see one at the entrance to the zoo. She was thrilled to ride a pink flamingo, and I had fun too. 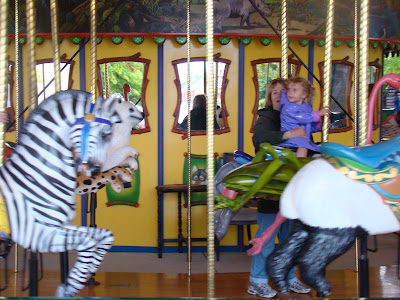 We also celebrated Jill's birthday over two days. On the "real" day we all went up to Milwaukee to visit my uncle and aunt; they are the only surviving relatives of that generation so we try to see them every time we visit Chicago. Then the following day we celebrated for real, thanks to Jill's in-laws. 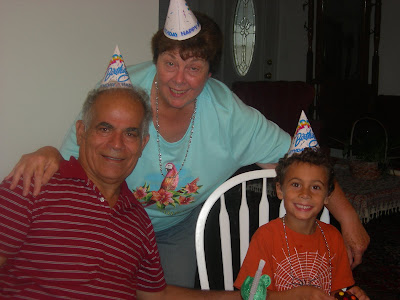 The Party Givers and Helper 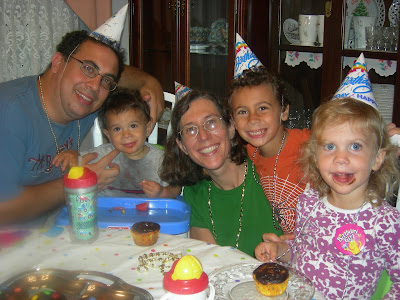 Chocolate cupcakes, yum!
The week passed very quickly, that's for sure. Time flies when you're having fun, right?
Posted by Judy S. at 4:23 PM 9 comments:
Labels: family and friends, travel

Summer slipped away while we were in Chicago. The weather was unseasonally warm there, but we arrived home to cold rain, a sure sign that fall has arrived. We are about to put away the tables, chairs, and water feature until next year. A few flowers are still blooming and will do so till the first frost, but it will soon be time to bring in the plants that I like to overwinter in the garage. Before we left, we took a few photos, just to savor in the days ahead. 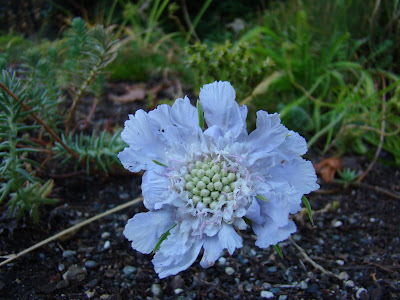 This little flower always reminds me of Mom Shaw. She called it the pin cushion flower, but it's "real" name is Scabiosa. The Gerbera daisy that she bought me years ago and has survived many winters in our garage didn't bloom this year. I was just happy that it had leaves and made it though the cold week that killed many of its companions. Maybe it'll bloom next year? 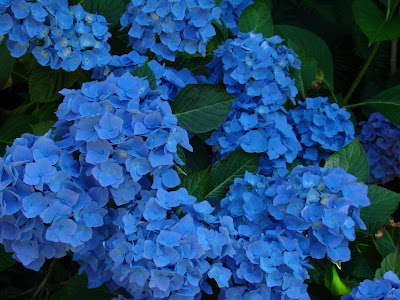 This past summer will always be the "Time of the Very Blue Hydrangeas". For some reason the hydrangeas were the bluest they've ever been. Would you believe they started out pink ten years ago? Thanks to all the pine trees, we have very acidic soil which turned them blue almost right away, but this year they outdid themselves. 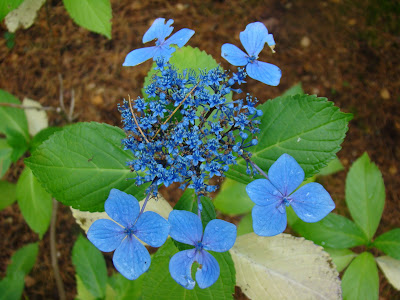 We also had a few flowers on the lacecap hydrangea that's in the front yard. It would probably bloom better if it got a little more sun. But, hey, this is Seattle, right? 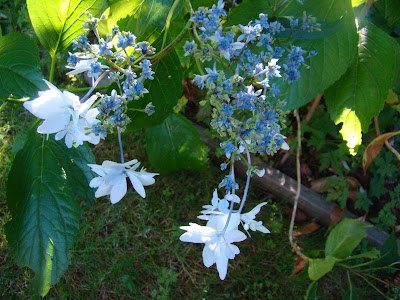 Even this little one, my retirement "rocket" hydrangea, finally after 3 years had flowers that gradually became more blue as the days went by. 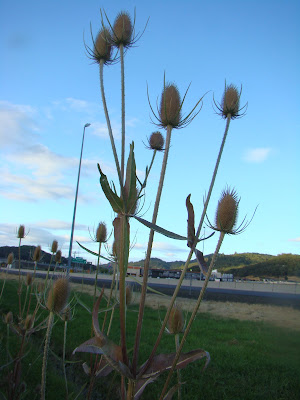 No, this isn't in our garden. It was blooming just outside the fence at the hotel in Roseburg, Oregon, and intrigued me. Sitting close by our computer desk is a vase of dried flowers, and right among them is this same "flower" dyed red! I have no idea what it is, perhaps a type of grass that in its natural state spelled
F-A-L-L. It's here full blown which means winter isn't far behind. Time marches on, doesn't it?
Posted by Judy S. at 11:44 AM 12 comments:
Labels: garden

Fun at the Fair 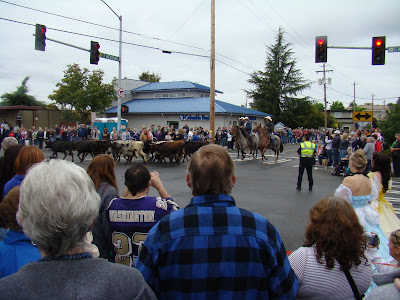 Yesterday we "did the Puyallup" for the first time in years. In Washington-speak, that means we got up early and headed to the fair with friends in time to watch the cattle down the main drag at the beginning of the parade. Notice the two princesses pretending that it's a hot and sunny day....NOT! 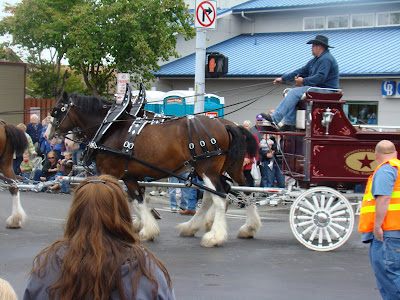 It was fun to watch the different horse-drawn wagons and the bands marching down the street to the fairgrounds. 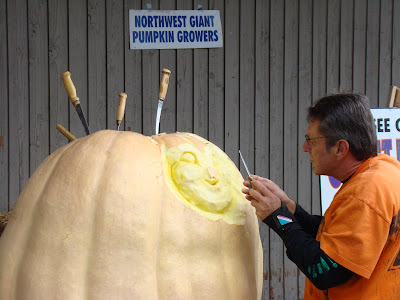 Inside we saw lots of things, including beautiful quilts and knitted items that were not supposed to be photographed. This pumpkin carver caught our eye. He is certainly prepared with different carving tools. How much do you suppose this baby weighs? 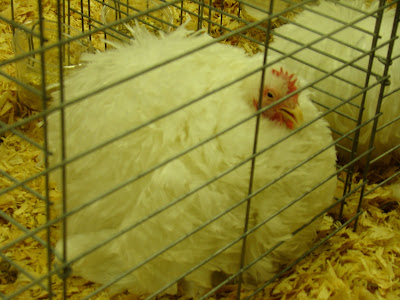 We looked at the bunnies, cats, cows, and these funny chickens. I would have named this one Elvis. It was quite comical to watch him try to drink water. 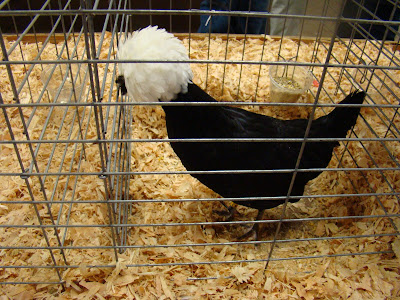 But what I enjoyed most (next to the quilts and knitting) was watching the drivers maneuver their wagons through the orange cones and then back them up without tipping over. 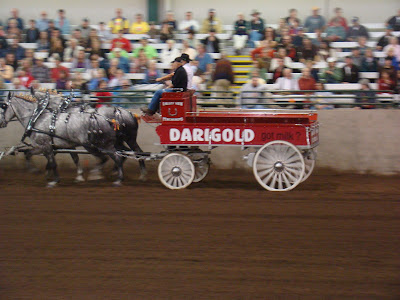 At the very end of the show the Shetland ponies, which looked absolutely tiny next to the Clydesdales, zipped around the ring at breakneck speed and cut some very tight corners with no mishaps whatsoever. The driver was controlling the horses with six reins, most impressive. (The announcer said that the Spanish Conquistadors rode these ponies which I found interesting.) 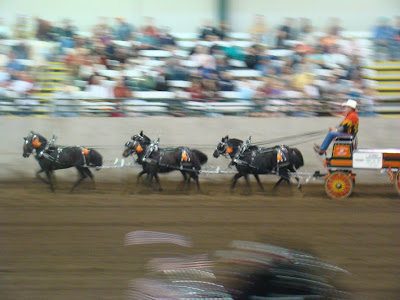 It was a fun and interesting day with hardly any rain!
Posted by Judy S. at 12:30 PM 9 comments:
Labels: family and friends

Socks are fun to knit, at least the first one of a pair is. I always have a hard time completing the second sock, for some reason. But, I was determined to get these done so I could start some new ones. 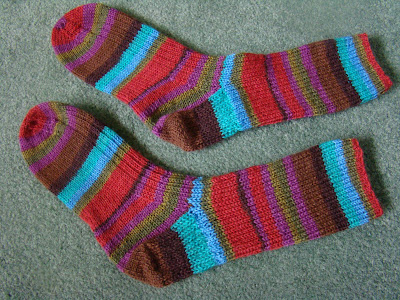 This pair is made from Kaffe Fasset yarn (Regia). I love his colorways in yarn and fabric too. 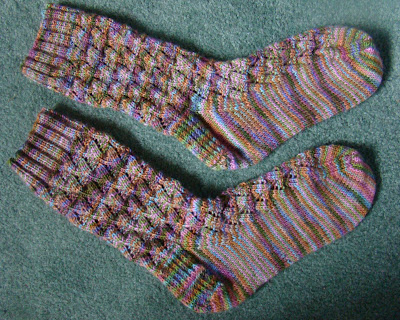 Socks That Rock has the best color choices~~~too many to choose from, that's for sure. This one is called Dutch Canyon and is Anne Hanson's pattern for Port Ludlow socks. The name intrigued me because that is where our daughter's former Girl Scout leader retired, and it turns out that there was a big knitting confab in that town last year. 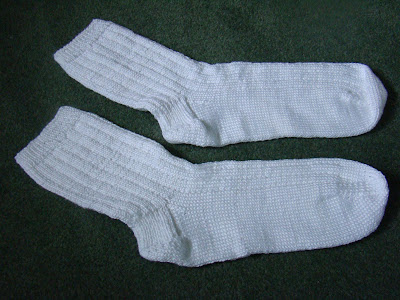 Dick likes all cotton socks, so I thought I'd try knitting some. It was harder than I expected, and I'm not thrilled with the way they turned out, but Dick's a good sport and says he likes them. 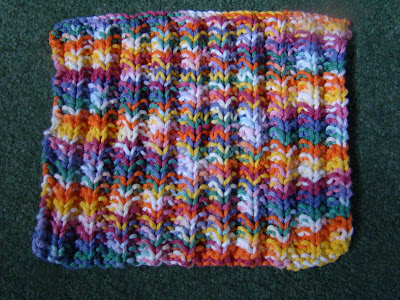 What would a month be without a dishcloth? This yarn color is called Gumdrop. Isn't that fun? Ever since a friend told me about the "mistake rib," I've wanted to try that stitch. So I cast on 45 stitches (multiple of 4+1)and gave it a whirl. It's not square, but I like it.

That pile of knitting UFOs is getting smaller! (Never fear, there are UFO quilts and cross stitch projects waiting in the wings......)
Posted by Judy S. at 4:03 PM 13 comments:
Labels: knitting

Whenever these spiders show up, we know that fall is on its way. Actually this guy's not really as huge as this closeup makes him look, but he is large! And hasn't been seen since his photo debut; perhaps he's shy? 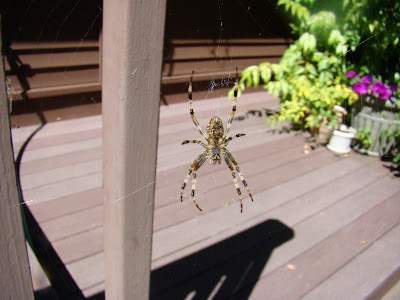 With the advent of the spiders, I was reminded that I had some projects to finish before we go to Chicago to see the grandkids. Besides Sophia's birthday sweater, I'd also been working on some other things that needed finishing. And finish them I did. Can you guess who gets what? 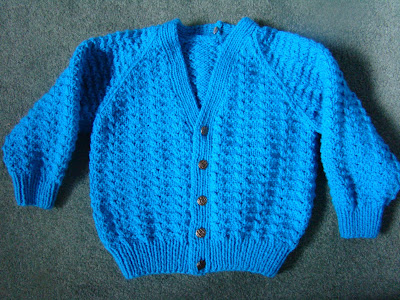 Dee had the link to this pattern on her blog. I tried to make it look like Mocha because Sophia always wants to see Mocha whenever we Skype with her. 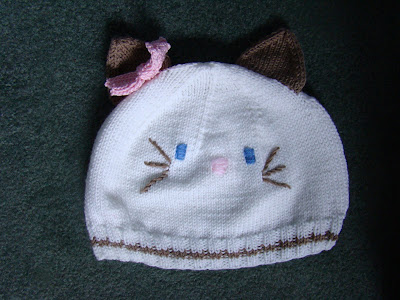 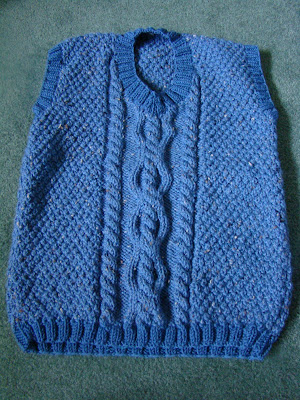 Mocha's not too sure about this next project but it's a great one for using up odds and ends of yarn. The rings are, too. (The pattern links can be found on my Ravelry page at jatshaw.) 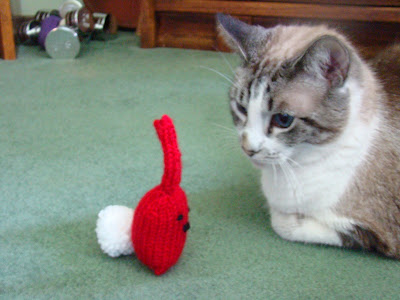 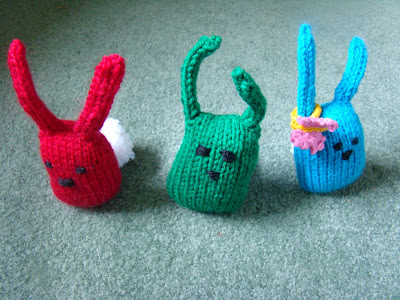 Yes, I've been having fun! 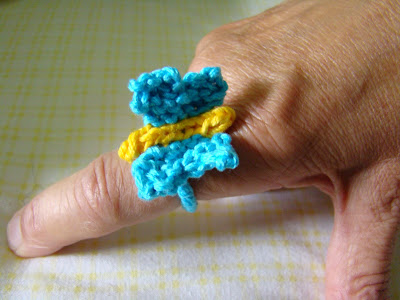 I also tackled some longstanding UFOs this month but will save them for another post.
Posted by Judy S. at 2:13 PM 12 comments:
Labels: garden visitor, knitting
Newer Posts Older Posts Home
Subscribe to: Posts (Atom)