Last week was a very special week! Besides our anniversary, David started kindergarten! It's so hard to believe he's that old already. 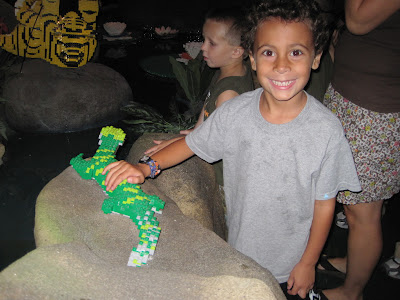 Sophia turned three and likes the furry sweater I made for her. 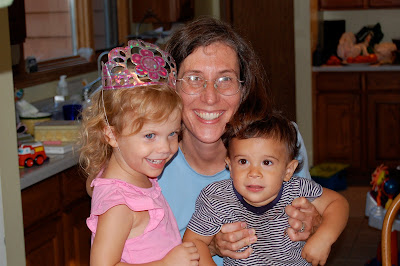 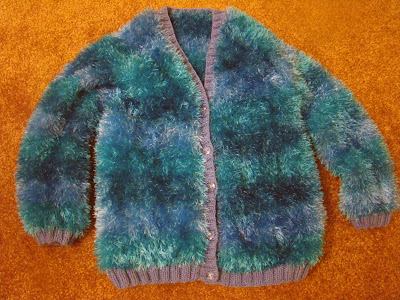 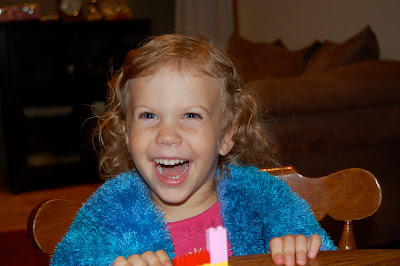 And Daniel started to walk! These kids are growing up way too fast! 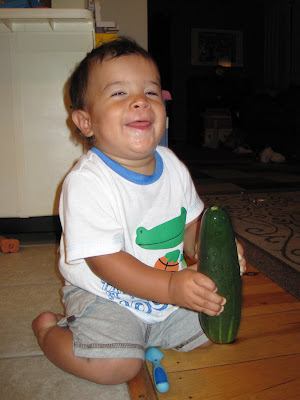 We also had a fun day in Anacortes and LaConner with friends who live on San Juan Island. This is their ferry, the Elwah, arriving, and we were too busy to get anymore photos. 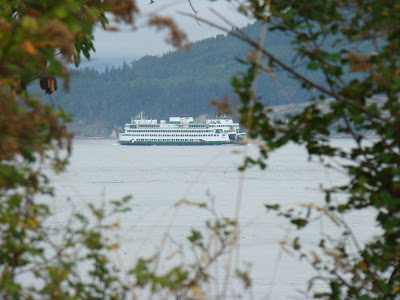 It was a GREAT week!
Posted by Judy S. at 3:36 PM 11 comments:
Labels: family and friends, knitting

Gerry has a most generous Giveaway on her blog as well as a wonderful tutorial on how she makes her amazing painted buttons. Check it out; you won't be sorry!

A week ago yesterday, the sun was shining when we got up, so we hopped in the car and drove up to Mount Rainier. Much to our surprise, that particular Sunday was a free entrance day, so we were not alone! 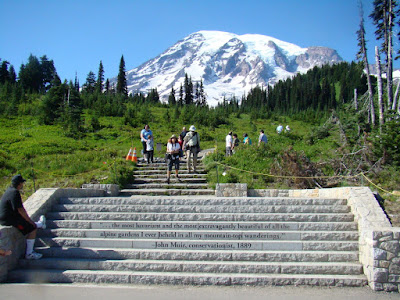 We decided to go to Paradise and hike up to the point on the trail where you can see several other mountains as well as Mount Rainier. 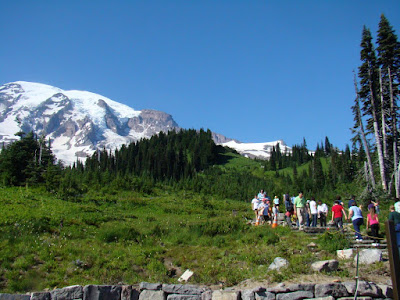 In one direction you can see Mount Adams and in another Mount Saint Helens. The latter used to have a beautiful peaked top that disappeared during the eruption in 1980. 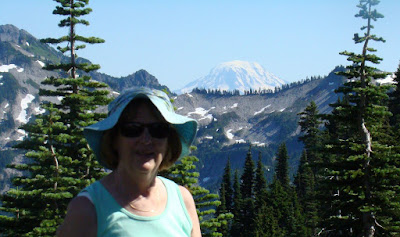 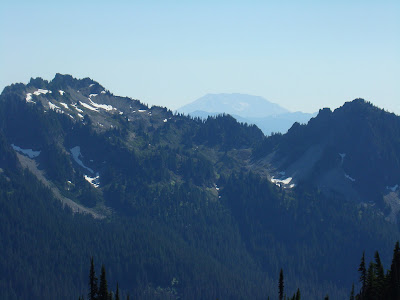 Mt. St. Helens
Serious hikers aim to reach the summit, but that takes special training and the right gear. The little specks in the snow on this photo are actually brave souls that appear to be skiing!

The wildflowers were blooming and were beautiful. The mosquitoes and horseflies were persistent, but we had a great trip. Only after returning home did we learn that our younger daughter and husband spent the whole weekend on the mountain! Wouldn't we have been surprised to run into them? 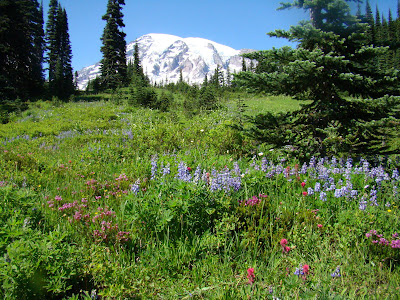 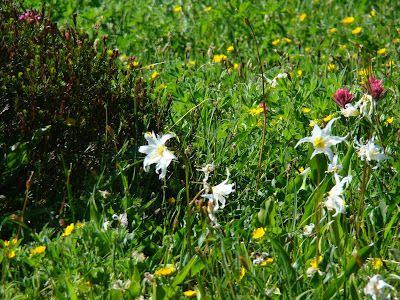 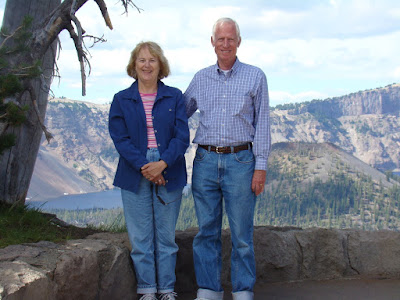 Forty-five years ago we stood before God in the presence of family and friends and promised to love each other. We still do! Like all couples, we've had good times and not so good, weathered a few crises even, raised 3 wonderful children, welcomed 2 great sons-in-law and 3 beautiful grandchildren. Life has been very good to us. And today is our special day! I hope yours is special too.
Posted by Judy S. at 12:26 PM 26 comments:
Labels: family and friends

Stitching and Knitting on the Road

Last week we visited two National Parks in two different states! We had a grand time exploring a bit of Oregon. 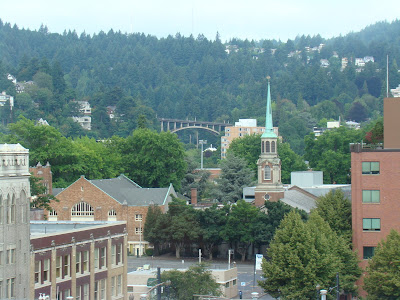 First we went to Mount Hood which was only accessible with chains when we were near there in May. (That was after spending the night in Portland and having breakfast at one of our favorite spots.) We drove to Timberline, an interesting lodge built in the thirties, and also hiked to Mirror Lake which has great views of the mountain. 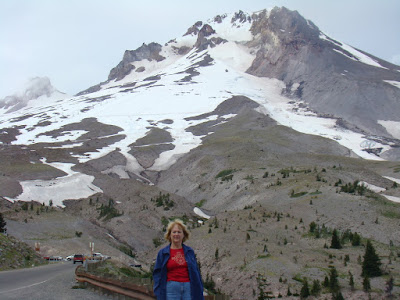 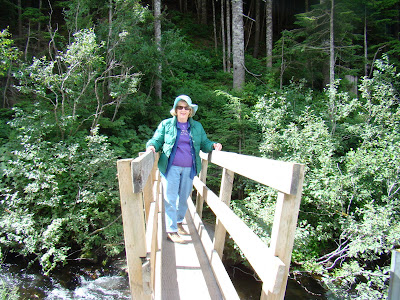 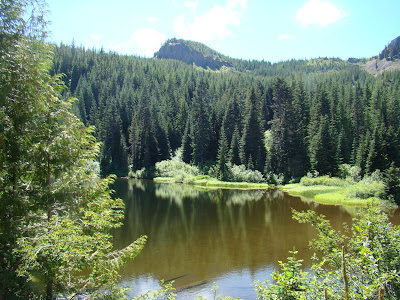 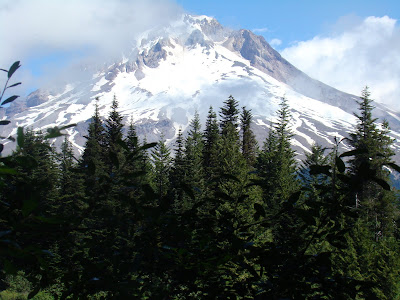 We were so happy to have some sunshine because every other time we've been to this area, Mount Hood has be totally hidden by clouds. It was even sunny on the trail! 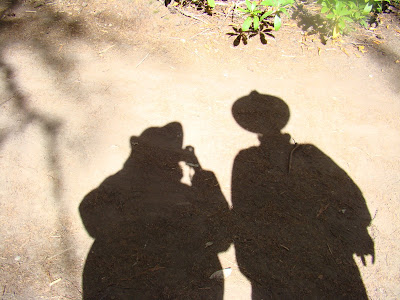 Next we headed for Roseburg, determined to see Crater Lake sans snow. We stopped to see a few waterfalls on the way. 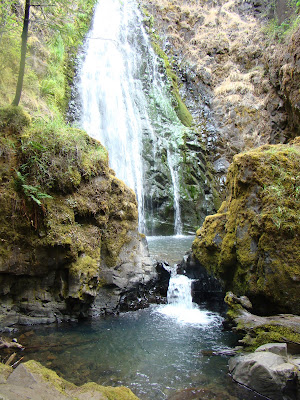 Isn't this an interesting trail? We didn't go any further...... 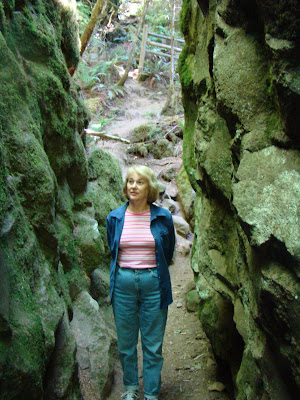 Crater Lake is so beautiful. Can you believe that it is nearly 2000 feet deep? 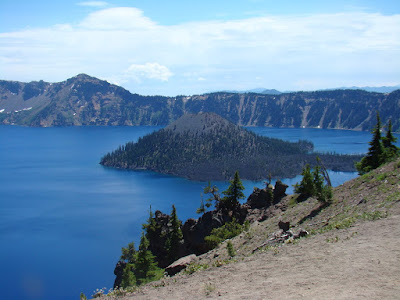 Of course, no trip would be complete without a stop to look for yarn. We found the Twisted shop in the Portland area, and right next door we saw this amazing bonsai in front of a Japanese restaurant. (And yes, I got some yarn.) 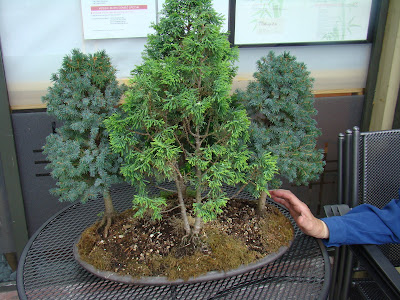 Lots of knitting happened in the car while Dick was driving, but I can't share it until after Wednesday which is Sophia's birthday. In the evening I worked on the letter "V" of the Christmas Sampler. It's done except for the outlining. That was one detailed letter! 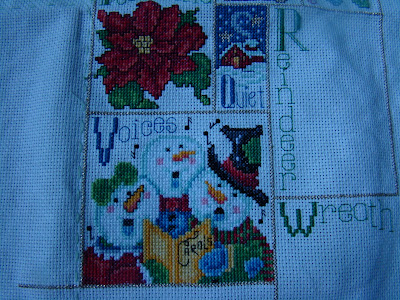 Since this post is getting awfully long, I will save our visit to Mount Rainier yesterday for another post.
Posted by Judy S. at 8:24 PM 9 comments:
Labels: Christmas SAL, travel

Last month I was contacted by Susan Lenz after a comment I made on Plays with Needles' blog. Susan had discovered my non-fabric related passion: adult literacy. To my surprise, she asked if I would submit a photo of me and my student so that she could create a decision portrait concerning illiteracy for her upcoming exhibit. My student was a bit reluctant at first, but then he agreed upon the assurance that his name would be kept private. Susan did a wonderful job, and hopefully this portrait will do a tiny part to spread the word that it's never too late to learn to read.

You can read more about Susan and her project on her Decision Portraits blog, or better yet, if you live in the area, visit the City Gallery at Waterfront Park, September 10-October 10, in Charleston, SC, to see her wonderful work for yourself. You can also read more about adult literacy at the ProLiteracy website.
Posted by Judy S. at 10:33 AM 13 comments:
Labels: adult literacy

Blooms, Butterflies, and a Bird~

Right at the moment, the garden is looking pretty good. This year the hydrangeas are bluer than usual for some unknown reason. (You might have already noticed them in my header.) 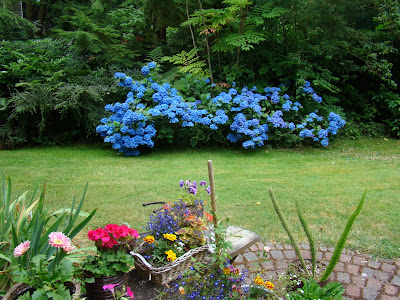 After almost four summers, this "retirement plant" has finally had a blossom. It's called a "rocket hyydrangea" because of the way the flowers shoot out into the air. Isn't it funny looking? 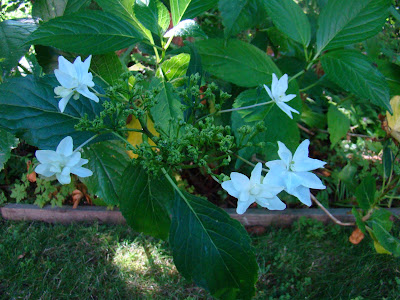 We don't have too many white flowers in our garden, but this one is kind of interesting. It's a balloon flower, and that is exactly what the buds look like. It's fun to watch. 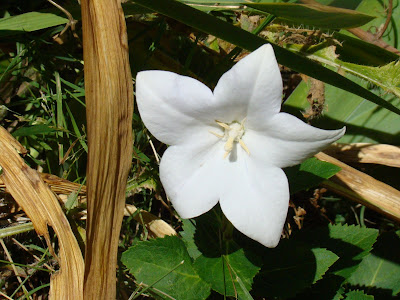 Every summer I love to plant a blackeyed Susan vine because it has such interesting flowers. Since Dick took this photo, several other buds have opened, and the flowers are more pinkish than orange. 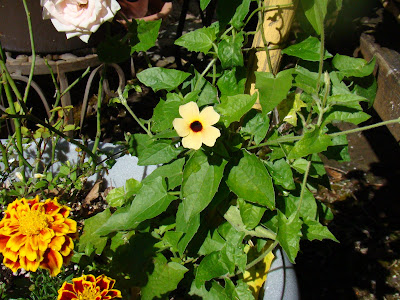 When I saw these butterfly rings on the Spud and Chloe blog, I got busy and made a couple for last Sunday's birthday party, interestingly for a little girl named Chloe and her brother. Now I need to get cracking and make some to take to Chicago next month! 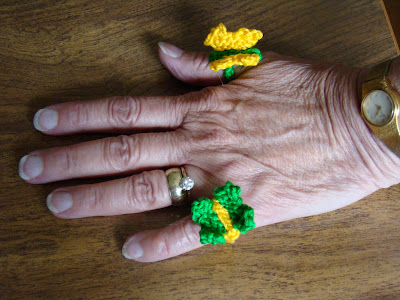 This little red-breasted nuthatch is very shy, and wouldn't you know it? The very time he landed in a good spot, the camera focused on the screen. We'll try again. Meanwhile, I need to go deadhead a few plants. Hope your day is going well! 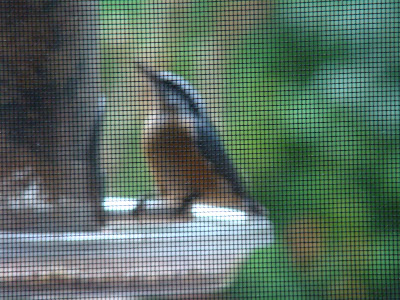