Quilts, Socks and Such

Last fall one of the local quilt guilds had a show where one of our group's joint projects was displayed. This past week a friend sent me a photo to share; each of us made a dress (mine is the one on the top right), and then two others put it together and quilted it. The quilt was donated to the local Ronald McDonald house. 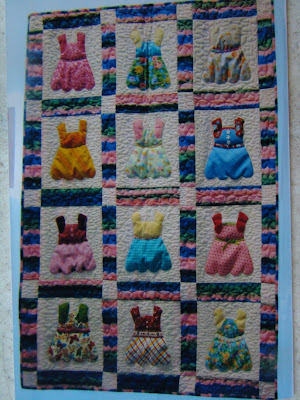 Lots of vendors were also at the show, and I found a kit from one of my favorites: Hummerdog Quilts. Her kits, in addition to being accurately precut, are always cute and beautifully packaged as well. One of 15, this little widget was correctly identified as a tutu, first by Susan and then a few others. 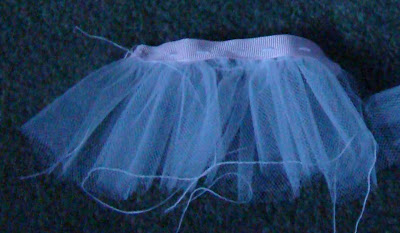 One tutu will be attached to each leotard after the quilt is quilted. The top, which has a total of 6 rows, is all ready to be "sandwiched," and only 4 more tutus need finishing. I am aiming to have it finished to take along on our next trip to Chicago. (There are two other quilts that need to be finished before then also!) 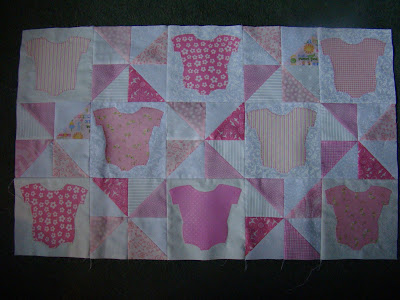 One of my goals has been to learn how to knit a sock from the toe up, so when I saw this mystery project at the Knitters Brewing Company, I joined. To my delight, I finally figured out how to do "Judy's Magic Cast-on" after a few false starts and finished the first clue. Hopefully, I'll be able to remember for sock #2! 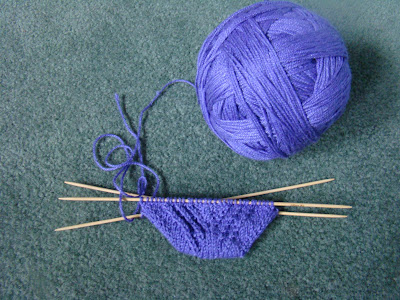 The other item that was completed this week was a pair of socks for David. He requested a pair of wool socks a few weeks ago, and when asked for a color, replied, "Rainbow". Luckily I had some Crystal Palace Mini Mocha in that very color. The two don't quite match, but I don't think he'll mind. 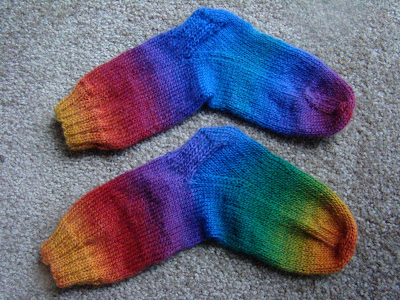 Oh, and in case you're wondering, the cranberry bread turned out great. I used my regular recipe plus Gluten Free flour from Jules Gluten Free as well as some non-dairy "butter". Maybe I'll include the recipe on my next post; it's one I've had so long that I don't remember its origin. 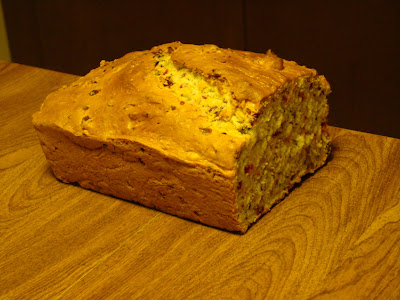 On Tuesday evening we had our "snow event" which had been predicted for more than a week. According to the forecast, the snow was to begin during the rush hour; thus, on our way home from volunteering at the hospital that afternoon, we saw buses decked out in chains but NO snow. No snow, that is until about 7:45 PM, when I glanced outside to see lots of fluffy flakes, falling hard. In no time at all, the view from our front door looked like this: 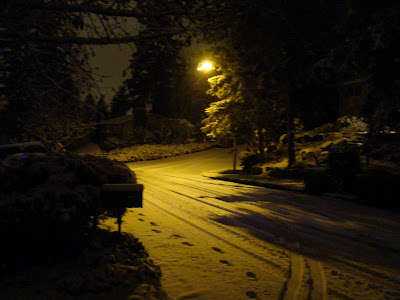 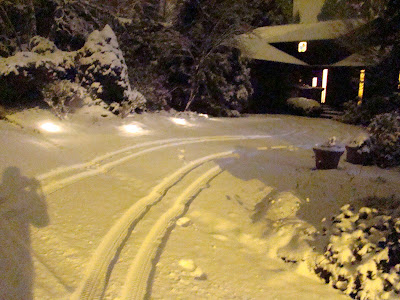 Dick thought our neigbor's house looked especially pretty. However, during the night, the temperature began to rise, and rain began falling so that by morning, all that was left was a mere trace and a few strangely parked cars that had been abandoned during the height of the snowfall. Today the thermometer reads 55 degrees! 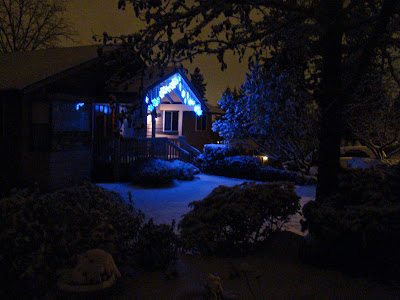 In case you're wondering whether I've abandoned my stitching and knitting, I haven't. I've been taking stock of bags of UFOs and trying to decide which one should be finished first. I also joined the Mystery 220 group and am for the moment caught up...at least till Saturday when clue #3 will be posted. Mocha is quite curious as to what this will be. I think I know....we'll see. 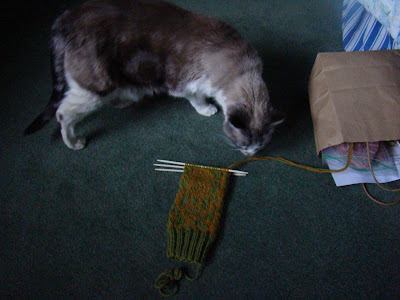 Another project I started before Christmas and had hoped to finish. Life got in the way, and I spent about a week like this: (Mocha and Ginger liked the new routine!) 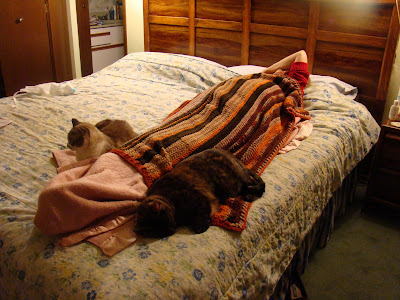 Fortunately, I am fine now and back making 15 of these these little widgets: 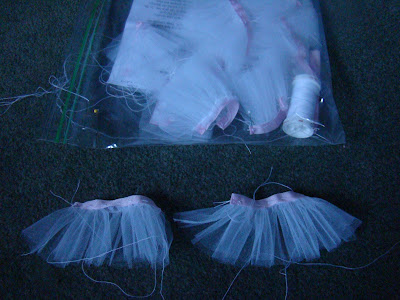 Can you guess what they are? They are to be attached to something I'm making for a certain little gal who loves pink and knows how to defend her territory. Doesn't she look like she's saying, "Hands off!" 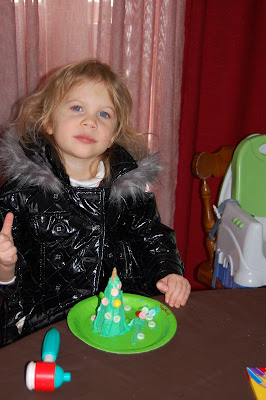 Maybe in the next post I'll reveal what these are. Meanwhile I'm going to go make some cranberry bread. I am trying to relearn how to bake gluten and dairy free, a real challenge. (Oh, and in case you are curious, that strange looking flower in my header is witch hazel. Every January it begins to bloom, and it's right on schedule.) Happy January!
Posted by Judy S. at 2:10 PM 16 comments:
Labels: grandkids, knitting, quilting, snow

Late Monday afternoon, at the spur of the moment, we jumped into the car and headed to Snoqualmie Pass which is about 25 miles east on I-90. That's the same I-90 that ends around Boston! We were surprised at the amount of snow because there is no snow at our house at all. 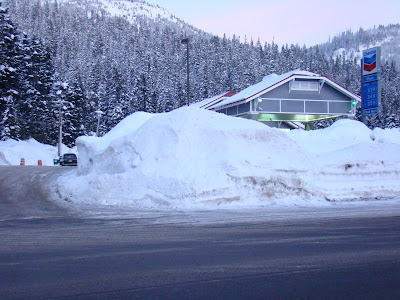 Even more surprising were the pink snow-capped peaks, thanks to the setting sun. 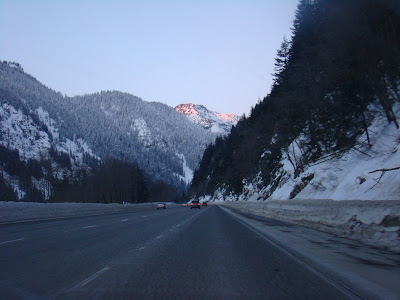 We had heard about "pink snow" connected with Mount Rainier but had never seen it ourselves. How fun and how magical! 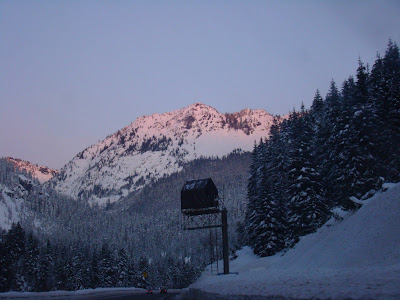 Here's a plane taking off, we hope to somewhere warm. Wouldn't it be great to capture these colors in yarn or fabric? 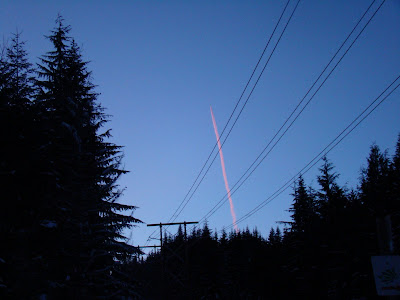 In no time at all the pink had faded into a dusty blue, and it was time to head home. For me it was yet another reminder to take joy in the moment. These beautiful minutes are all too fleeting and can escape entirely unnoticed! Carpe diem! 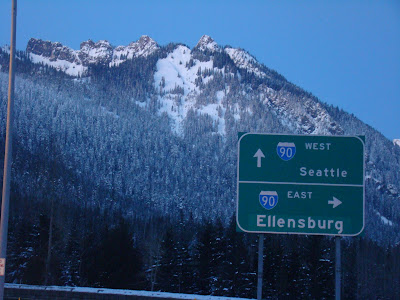 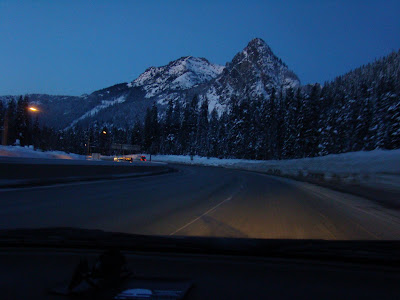 Since we don't have cardinals here and love them, I decided to create one using the Penguin pattern. (Next up, maybe a bluebird, robin, or since I have left over penguin-yarn a crow?) 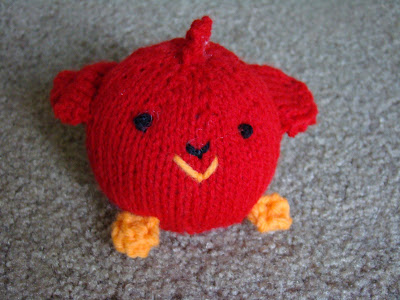 Today I've been playing with my new toy! Instead of this, 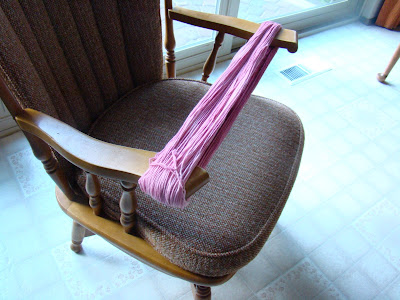 I can now do this. 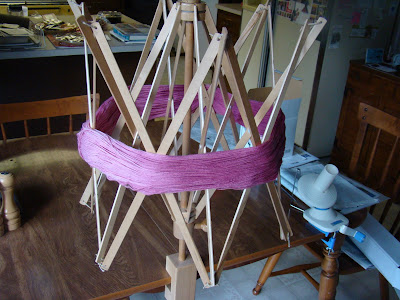 Oh my, what fun! I did 5 skeins of yarn this afternoon in no time at all. Dick loves my toy also as he did NOT enjoy holding the yarn and DOES like to use that chair....that is if Ginger doesn't get there first.

HAPPY NEW YEAR, EVERYONE! May this year that began with 1/1/11 be filled with wonder and joy for you and your families!
Posted by Judy S. at 4:58 PM 15 comments:
Labels: gifts, knitting
Newer Posts Older Posts Home
Subscribe to: Posts (Atom)