Fun in the (Mostly) Sun!

For the past ten or so days while in Florida, we had great fun exploring St. Petersburg Beach and Bonita Springs Beach as well as a tiny bit of the Everglades. The weather was a bit chillier than we had expected, but that didn't stop our daily adventure. On the one day of rain, we went first to the Salvador Dali Museum, and then out to the pier in St. Pete for lunch. We ate outside at the restaurant and were visited by lots of boat-tailed grackles that were seeking handouts. These cheeky little guys were actually swooping down and helping themselves off trays before the waitstaff could clear the tables! 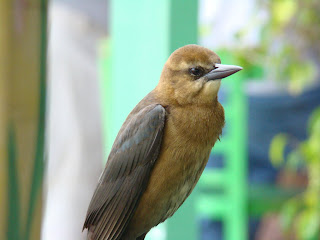 Gutsy Female Grackle
Another day we enjoyed a picnic at the Fort DeSoto State Park and watched a pelican pester a fisherman. Oh, how he wanted the fish the man had just caught! 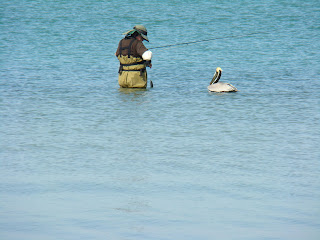 I know you have a fish stashed somewhere!
The Corkscrew Swamp Sanctuary was a wonderful place to explore. We walked the entire boardwalk and saw lots of wildlife. Woodstorks use the park as a nesting site, but we only saw them soaring overhead here. (Check Dee's blog for a great photo.) We did see a lone red-shouldered hawk, busily scanning the area, high up in a tree. 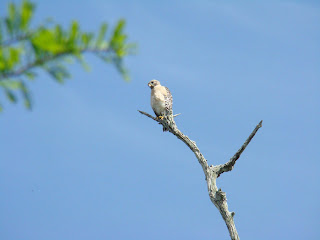 Just checking things out...
We also saw a lot of wading birds, including this ibis. The ranger said these birds have a very sensitive curved beak and swish it through the water until detecting its prey. Wouldn't that be a hard way to get your food? 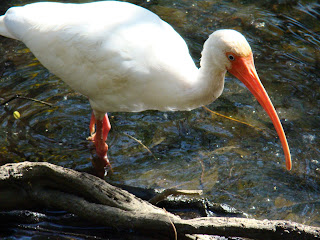 I know there's something yummy in here somewhere!
We also saw a few alligators here and this snake, thanks again to a sharp-eyed ranger who said it was non-venomous. Nevertheless, it was impressive! 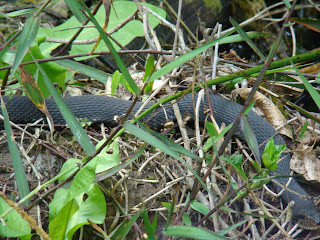 Can you see me?
About 90 miles away from Bonita Springs Beach on the Tamiami Highway, we visited the Shark Valley area of the Everglades. What an interesting place! We walked around a bit and then decided to take the tram tour, which was more expensive than we remembered, because walking the 7 miles one way to the viewing tour just wasn't an option for us time or energywise. We saw lots of alligators of all sizes here. This photo was taken from the viewing tower at the end of the tramride. 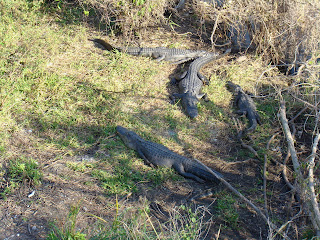 Enjoying the sun!
Here we also saw several nests of baby anhingas. The guide mentioned that this was the first year in a while that the anhingas have nested and seemed very excited about that fact. Anhingas are beautiful birds that kind of resemble cormorants. However, anhingas fish by spearing their prey with their pointy beaks and then whacking the fish around until they can flip it and swallow it, head first! 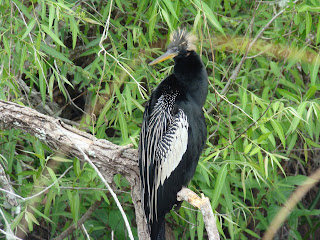 Anhinga
Lest your eyes glaze over with all these bird photos, I will save a few more for tomorrow!
Posted by Judy S. at 10:13 AM 3 comments:
Labels: photos, travel

We got back late Wednesday night from 10 lovely days in the Florida sunshine and woke up to about 4 inches of snow on Thursday! Our poor little portable GPS, a gift from DS, must have been in shock because it was showing the shortest route back to our last hotel, only 3123 miles away. Not a bad idea except we couldn't get down our hill till later in the day. 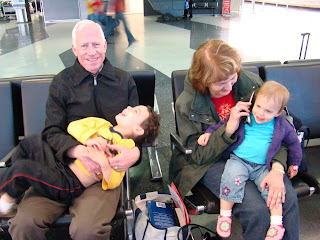 Rendezous in Chicago
Enroute to Orlando, we had a long layover in Chicago and met up with our daughter's family for a few delightful hours. The next day we drove to St. Petersburg Beach to the condo my sister and BIL had rented. It was a tad chilly there but way better than either Seattle or Minnesota! 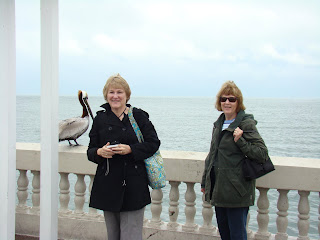 Sunny but Chilly
After a few days of exploring the area with my sister Jane and Ted, we headed south to visit a friend from church who now lives in Englewood. Just as we were leaving her house, this little fellow showed up. Sandra was amazed as she hadn't seen him since our last visit a couple of years ago! 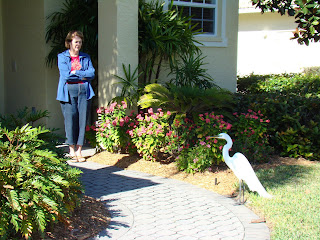 Is that you, Ernie?
Later that same day, we met up with my sister again and also my cousin who lives in Sarasota. We had a nice lunch together before heading to Bonita Springs Beach and Jane and Ted's second condo for a few more days of sun. Tomorrow I'll post some of the photos Dick took during our explorations. 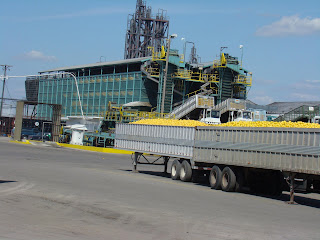 OJ anyone?
Travelling back to Orlando to catch our plane home, we passed lots of orange groves and trucks loaded with oranges. Some of them must have been headed to this processing plant where we stopped to take a couple of photos because we'd never seen anything quite like it. We ate lots of citrus while we were gone, including one type that's only available in January in Florida, the Honey Bell. Yummy!
Posted by Judy S. at 4:19 PM 5 comments:
Labels: photos, travel

Two more pair of booties are finished! One set is for the yet-to-be born grandson of friends. 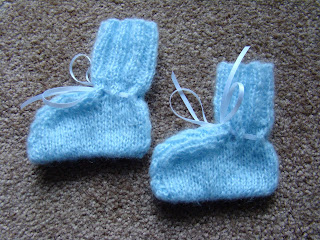 Cabled Booties
The second pair is for a baby born at the UW hospital whose Mom I taught to knit. She had come up to Seattle for a wedding in July, developed complications with her pregnancy, and didn't get to go home with her son until November! Thankfully he is thriving as a result of the care given his mom. Hurrah for modern medicine! 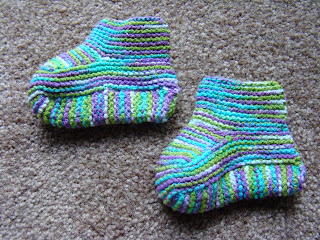 Well, I have finished all twelve Noah stitcheries, and they were really fun to do. I varied this block slightly from the pattern, using the color of the first dove rather than gold, and adding the branch to cover up a spot on the fabric. The Ark
To make embroidering easier, I left all of the blocks as one piece until I was finished before cutting them apart. As you can see, they haven't been pressed! 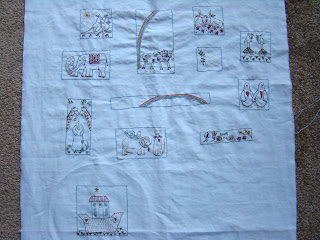 Almost Done!
I learned a lot putting on the borders. I should have made them wider and put them on randomly colorwise rather than all the same. The directions call for cutting the borders 3/4 inch but I think I would have preferred that measurement to be the finished size. 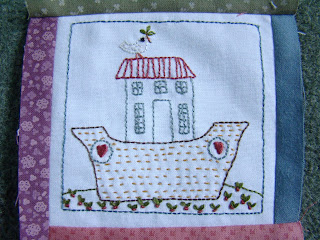 The Ark with Borders
It's going to be a while before I finish this quilt because like Kris, my blocks don't fit together like they should, so I am going to have to punt! I also want to end up with a larger quilt, so, stay tuned. I found the cutest Noah fabric for the back..... Thanks to Lynette for sharing these stitchery patterns!
Posted by Judy S. at 4:19 PM 11 comments:
Labels: embroidery

Here's what we woke up to on Monday morning: Pretty? Yes. Warm? No. This is why we're heading south in a few days! 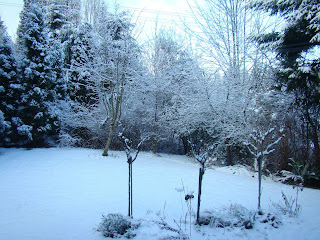 Snow!
Inside though, my house plants aren't complaining. In fact, they are acting like it's spring. Just look at this blossom. Don't be fooled, though as it smells terrible! 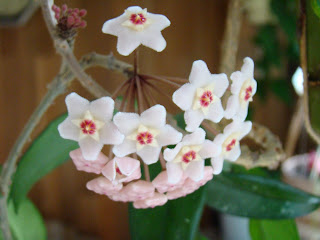 Hoya
Look at the new bud on my cactus! My neighbor Kathy gave me this plant a long time ago, and it's doubled in size. Every year it ususally blooms, but now it appears to be sprouting an appendage. Sprouting an arm?
I can't wait for my sister to see this one. She gave me some cuttings for this plant during the summer of 2006, and now two years later it's blooming. As this bud matures, its little "mouth" opens, giving it the look of a goldfish blowing bubbles.
A great name, I think! 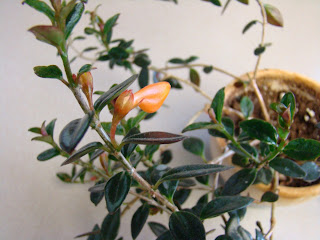 Goldfish Plant
Yesterday morning, the snow was almost gone, and Dick took this photo of the setting moon. 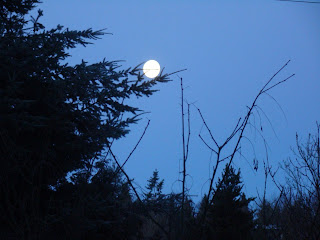 At last these crazy socks are done. I don't know why they took so long as this yarn is much thicker than most sock yarn and the Ann Budd pattern from Getting Started on Socks is terrific. For some reason though, I have a tough time getting motivated on sock #2, and this one was no exception. They are done now. Yeah! 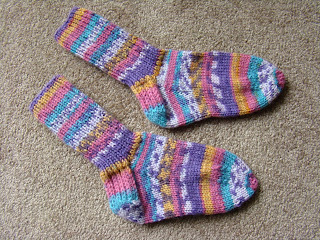 Party Time Socks
Look who's modelling some of her Oma's creations! And yes, she is a happy little gal. Jill says she calls this sweater "Oma," so maybe it's time for a visit? 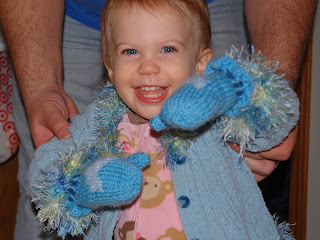 "Ain't she sweet?"
Now, back to stitching on the Gail Pan BOM where I'm already behind Kris. Have you seen this project? It's very nice.
Posted by Judy S. at 9:55 AM 8 comments:
Labels: family and friends, knitting

Look who's guarding the register now? Ginger and Mocha both love to sleep on the register under the computer desk but not together. 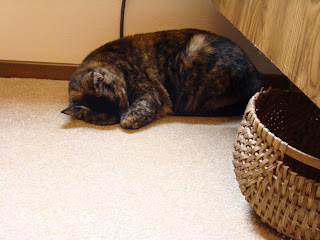 Keep Out!
Mocha, however, doesn't seem overly concerned. When not on the register, she can sometimes be found snoozing on our bed or one of the other beds in the house. Cats sure do sleep a lot, don't they? 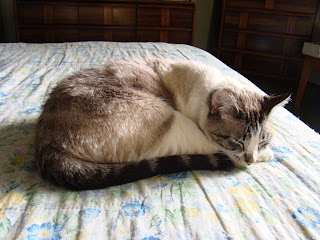 Ahhhhhh!
Meanwhile, I've not been sleeping, during the day at least, but rather working on a few projects. New ones...sorry Kris. I've had the yarn for this dinosaur sweater for quite a while and recently realized that if I didn't get cracking and knit with it, there might not be enough yarn for the right size! This is an interesting pattern because you start on the front. That's a bad one for me because usually the promise of doing the front gets me through the back! (I do have some duplicate stitch and embroidery to do on Dino, so that will be my carrot.) I totally changed the pattern's suggested colors because David once asked me for a green dinosaur; he wasn't thinking sweater though. The purple on the dino's tummy is leftovers from Sophia's sweater and finally shows the true color of that yarn. Hopefully there will be enough green yarn left to make one of the "Knitting at Knoon" dinosaur toys too. Can't start that though till I finish a UFO........ 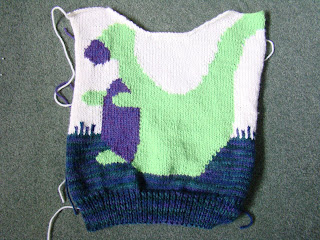 Frustration, Joy, Sadness, all in a week's time.

This was an odd week, full of mixed emotions. Catherine sent us this beautiful picture taken in Africa last weekend. Now, she's been trying to get home ever since Thursday. Sometimes travel can be very frustrating, especially after the end of a two week work assignment. Hopefully her plane has just landed at Seatac. 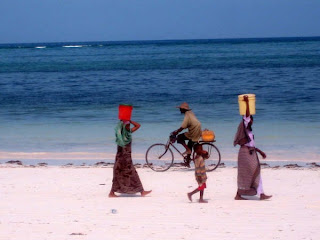 Zanzibar
David turned FOUR on Tuesday. However did that happen? I can so clearly remember the middle of the night phone call, announcing his arrival, as if it were yesterday. Doesn't that cake look tasty? 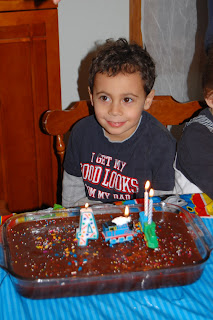 Four Years Old!
Just before choir practice on Thursday, I got a phone call from my cousin Lori with the news that her dad, my uncle, had just passed away. In just a few short weeks, death has claimed two members of the older generation in our family, bringing us ever closer to taking on that role. It seemed quite fitting that our anthem today was John Rutter's beautiful arrangement of the Twenty-third Psalm. Lyle was so good to me when I was little, and we'd visit my grandpa's farm. Even though miles have separated us these past years, fond memories remain.

Completely oblivious to the week's happenings, Mocha spends her days eating and sleeping, trying to find the warmest spot in the house. She looks so much better now than when we first brought her in. What an uncomplicated life she leads...now. 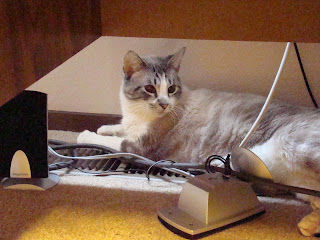