By now, you may be wondering what's happened to me! I've NOT been watching television but have been spending lots of time outside in the yard.  We were gone last weekend to the Tri-Cities (Richland, Pasco, and Kennewick for you non-natives) in search of a little warmth.  And we did find some!  We also had fun walking along the Columbia River on the Sacajawea Trail. 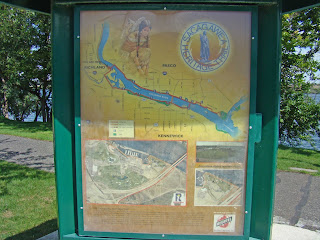 Before we left for home, we visited the Sacajawea Museum which was very interesting.  Did you know she was only 17 when she joined the Lewis and Clark expedition? She died of an infection shortly after the birth of her second child, a daughter, at the age of 25. 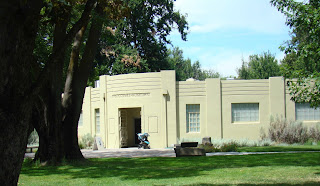 The museum is located at the confluence of the Snake and Columbia Rivers.  How would you like to try navigating the river in this? 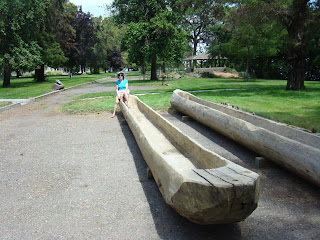 Today we felt rewarded when we saw this Stargazer Lily finally open one of its buds.  And yes, it was finally warmer here! 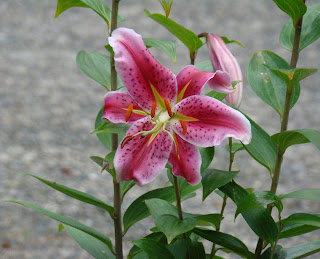 I've been knitting on some long term projects which I hope will be off the needles soon.  Two August birthdays are spurring me on!  Meanwhile, I've finished another headband.  It's such a fun pattern and doesn't require a whole lot of yarn. 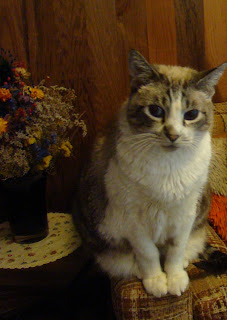 The Chicago family checked in today, too.  They spent a fun day at Six Flags yesterday. They look pretty happy, don't they? (Thanks for the photos, Michael!) 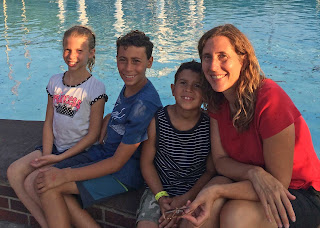 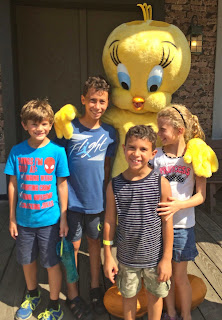 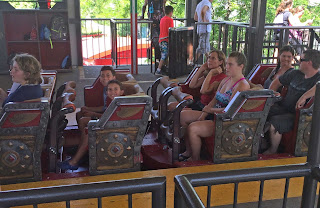 I'd rather try to paddle the dug-out than ride this thing! (Goliath roller coaster) 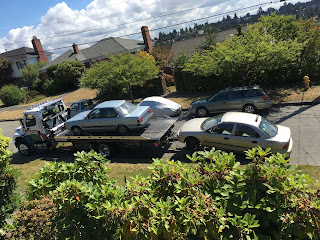 It's official now.  We are a one car family for the first time in almost 50 years.  Our second Mazda is on its way as a donation to KUOW, the local NPR station.  Our Mazdas served us well, the last two for twenty years each!  One of these days I'll get around to posting the flower pictures.......  Have a great weekend!
Posted by Judy S. at 8:35 PM 9 comments:

Exploring the PNW with Our Siblings

Bob and Mary weren't with us all week long because their grand daughter was graduating from high school in San Diego, but before they left,  we all took a ferry ride to Bainbridge Island, visited Churchmouse Yarn and Tea, had lunch and then ice cream at Mora's.  Then we headed for Port Gamble and walked around there.  For some reason, perhaps because we've taken this same trip so many times, we didn't take but two photos. This flower was in front of one of the shops.  We also had a very nice dinner in Gig Harbor. 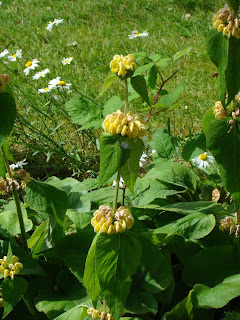 Have you ever seen such a strange looking plant?  We were told that it is Jerusalem Sage. 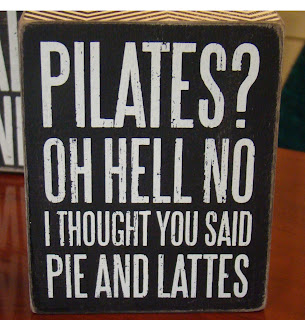 I had to have a picture of this sign for my Pilates teacher. 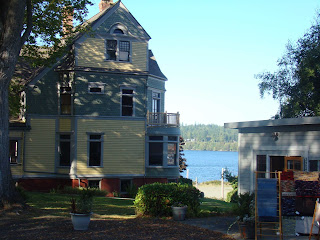 We took this photo on an earlier visit to  Port Gamble, but this time we walked around to the front of the house which faces the water. My recollection is that the house dates back to the 1800s.  There's a very interesting tree, a Camperdown Elm,  in the front yard; it was planted in 1875. 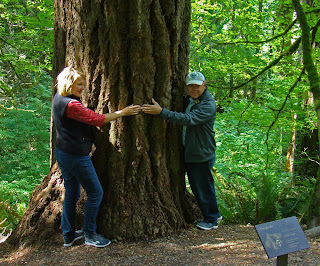 We took Jane and Ted to Snoqualmie Falls  and did a little bit of hiking on one of the trails. It was fun taking pictures through this hollow log. 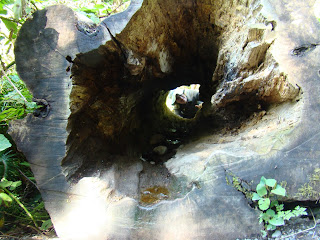 The falls weren't quite as full this time as they were last September when this photo was taken.  Lots of folks like to celebrate special occasions in the lodge that you can see on the top left. 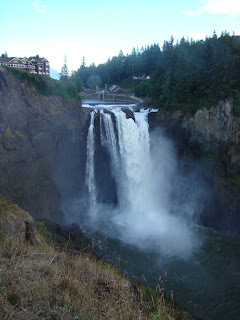 Another day we went hiking near Stevens Pass on the Iron Goat Trail. It follows along on the old path of the Great Northern Railway and has snow sheds and old tunnels. This area was the site of a terrible avalanche in 1910 that remains one of the worst natural disasters in our state and is a relatively easy hike and very interesting, too. 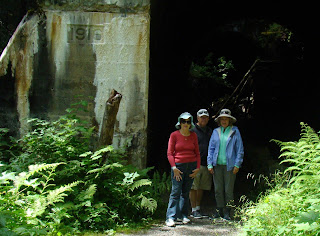 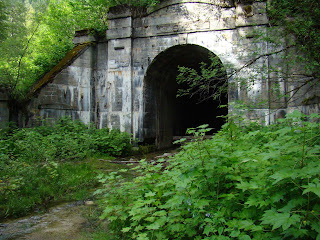 We also saw lots of wild flowers, but I'll save that for another post.  Have a great day!

Wow, here it is almost the Fourth of July, and I've not posted anything since early June! Well, it's been a bit crazy here.  I had a "significant" birthday, and the unexpected festivities lasted almost 2 weeks!  Jill and Family from Illinois surprised me at the Spaghetti Factory at what was supposed to be a celebration for our son whose birthday is 2 days before mine. 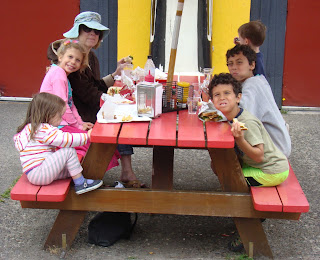 Here are all the grandkids having lunch across from the Locks after a fun morning exploring there and Golden Gardens. 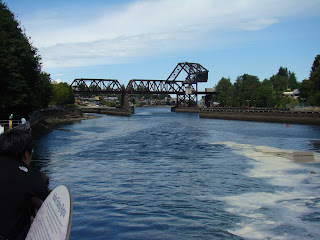 This railroad bridge has to go up to let tall sail boats through. 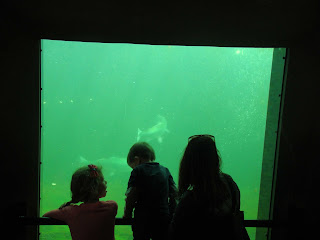 A few salmon were using the fish ladders much to the kids' delight. 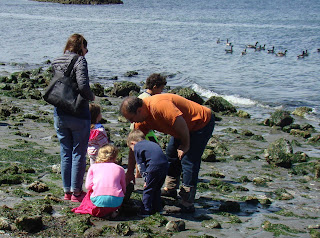 Everyone enjoyed looking for rocks and shells in the tide pools. 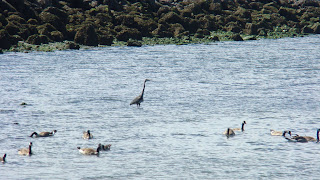 I don't think this heron was looking for shells or rocks though! 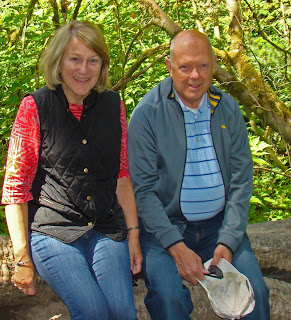 Later on at the end of the week these two from MN (my sister and her hubby) plus Dick's brother and wife (who managed to escape our camera) were among the guests at a surprise party which I thought was going to be a small family BBQ. ( Yep, I was shocked when I walked in the door with my large bowl of requested potato salad and was greeted by family and friends.  That is one birthday I will never forget!  There even was a photographer, but we've not seen her photos yet.) All six of us had a fun ferry ride one day and explored a bit of the Kitsap Peninsula.  Bob and Mary left for San Diego the following day to attend one of their grand daughter's high school graduation.  Jane and Ted stayed a couple of days longer, and I'll do another post about those adventures soon.  Haven't done much crafting aside from another couple of headbands though. 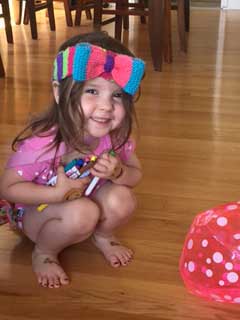 Apparently this little one has decided headbands are OK as she's finally wearing the one I made at Christmas.  It's a tad large though, so I made her this one in her favorite color. 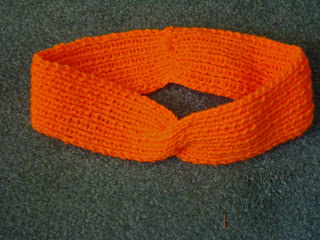 And this one from leftovers from the one I did for Sophia.  I made both a bit narrower and snugger, however. (It's a quick and easy pattern!) 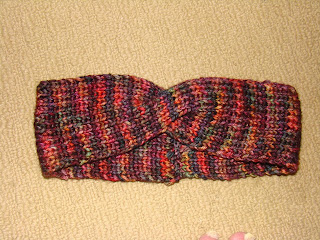 That's it for now.  I'll be back soon with more about our adventures.  Have a Happy Fourth of July or whatever occasion you happen to be celebrating!