Exploring a Wee Bit of Arizona

It's been almost two weeks since we returned from our  trip to Arizona, so don't you think it's about time to post some photos of our time there? For the first couple of days we stayed in Tempe and had fun exploring that area and visiting our long time friends from San Diego who now live in Paradise Valley . Then we headed to Tucson which isn't far from where my sister and another friend from college are spending part of the winter. 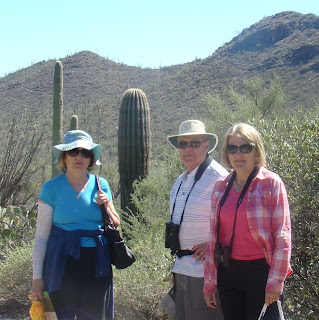 First we went to Tubac, a place with lots of interesting history.  We had great fun learning all about chocolate and watching how it used to be made. That gray stone was heated and it's brown from all the chocolate that was removed from the seed by grinding with an instrument that looked like a stone rolling pin.  Lots of samples were enjoyed as well as some drinks made from ancient recipes.  We also had a fun discussion with a docent about spinning wheels. 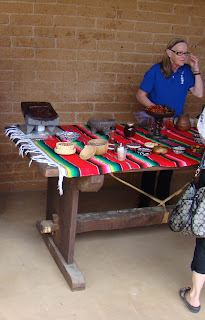 Another interesting spot Was the San Xavier del Bac Mission which is south of Tucson. It's one of 23 founded by Father Kino many, many years ago and still going strong today. It's beautiful! Isn't it amazing when you think it was built 300 years ago without our modern machines? 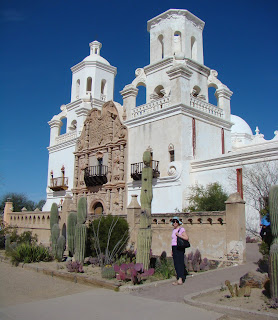 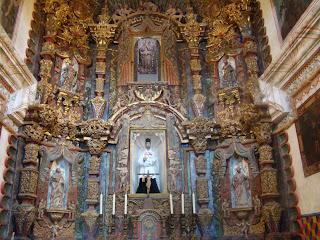 The altar was very ornate as was the domed ceiling. 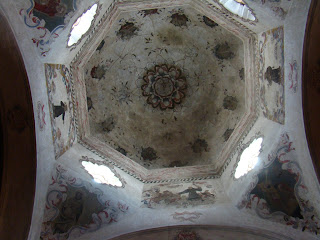 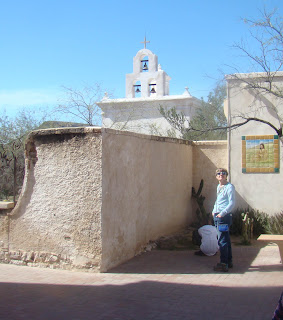 We also enjoyed a fun evening with my sorority sister and her husband. 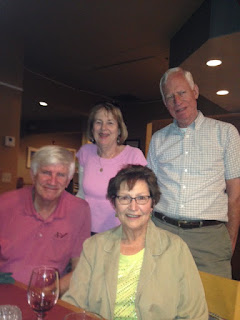 Probably my favorite spot we visited was the Desert Museum, also near Tucson. First we watched the raptors free flying. 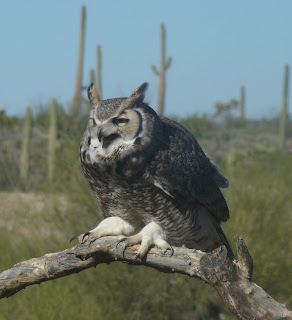 And then we strolled around the grounds, enjoying all the interesting exhibits. 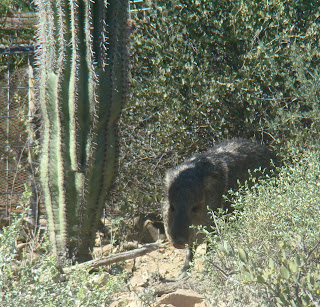 We saw javelinas and later heard that Jane and Ted had eight or more just like this one run past their patio one evening!  (This guy below also strolled by their patio on another evening.) 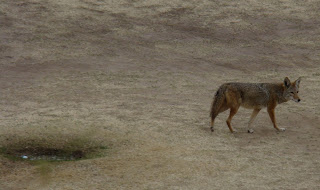 We loved the humming bird exhibit at the museum, too, and were excited to see this fellow in another area. Do you recognize him? 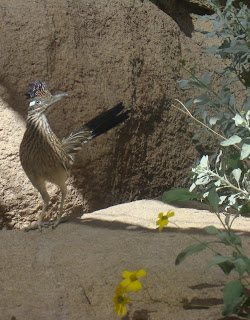 On our last day , we went to the Phoenix Botanical Garden which was also very interesting. The part I liked best was a trail through a typical village of long ago. 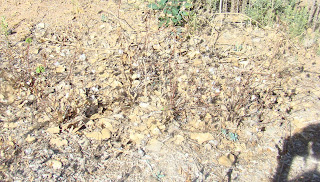 I was intrigued to learn that Pima cotton originated in Arizona and was grown first by the native people that lived in the area. If you look closely, you can see the white puffs of cotton waiting to be picked. 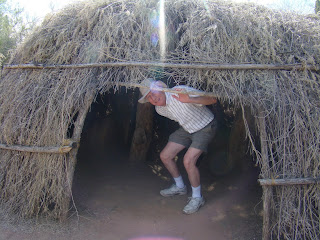 It was a whole lot cooler in this dwelling! 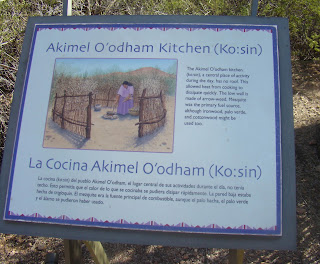 We'd probably find cooking in this kitchen quite a challenge, not to mention finding the food to cook! 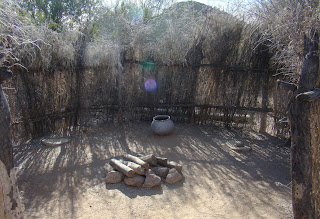 Here's DH reveling in the sunshine and his temporary wheels.  It was a fun reminder of his first long ago Mustang that wasn't a convertible.  We had a great ten days, but it's good to be home, too. 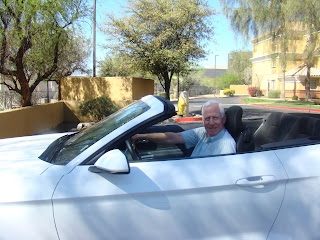 For the past few weeks I've been working on a mystery sock which was the focus of a KAL sponsored by the Knitters Brewing Company. It was one of the more difficult patterns I've ever attempted and the source of quite a bit of frogging.  However, I kept at it and one sock is DONE! (The sock is actually gray, not beige.) 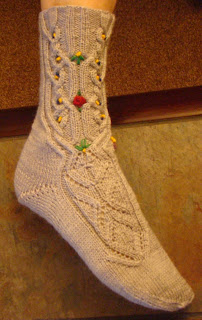 It was supposed to be the "canvas" for embroidery, but I just couldn't bear to put any kind of stitching on the cables.  The heel on this sock was really unique as well; it's created by a series of yarn overs that are then decreased.  One of these days I'll start on sock #2.

Even though it's been kind of chilly here today, our yard is looking very springlike.  The flowering plum is blossoming as are lots of pretty daffodils. 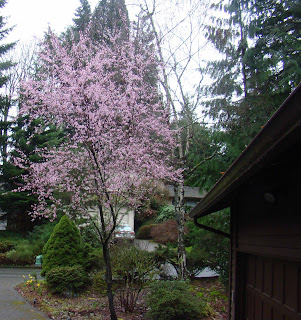 It was spring inside our house, too.  When we got home last week, the minute we walked in the door, we smelled this almost sickeningly sweet smell but couldn't find the source for a couple of days.  After we'd almost given up, DH found it.  The corn plant had a hidden stalk of flowers behind the canary island pine.  I cut it off, Dick took a photo, and we put it outside! 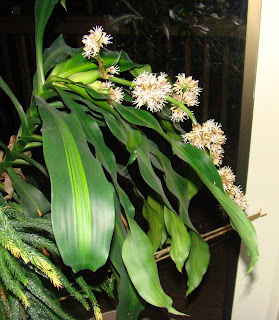