Off the Needles and Then Some!

Several projects popped off my needles this past week. These are a pair of Jaywalker sock, a fun knit with widely striping yarn. 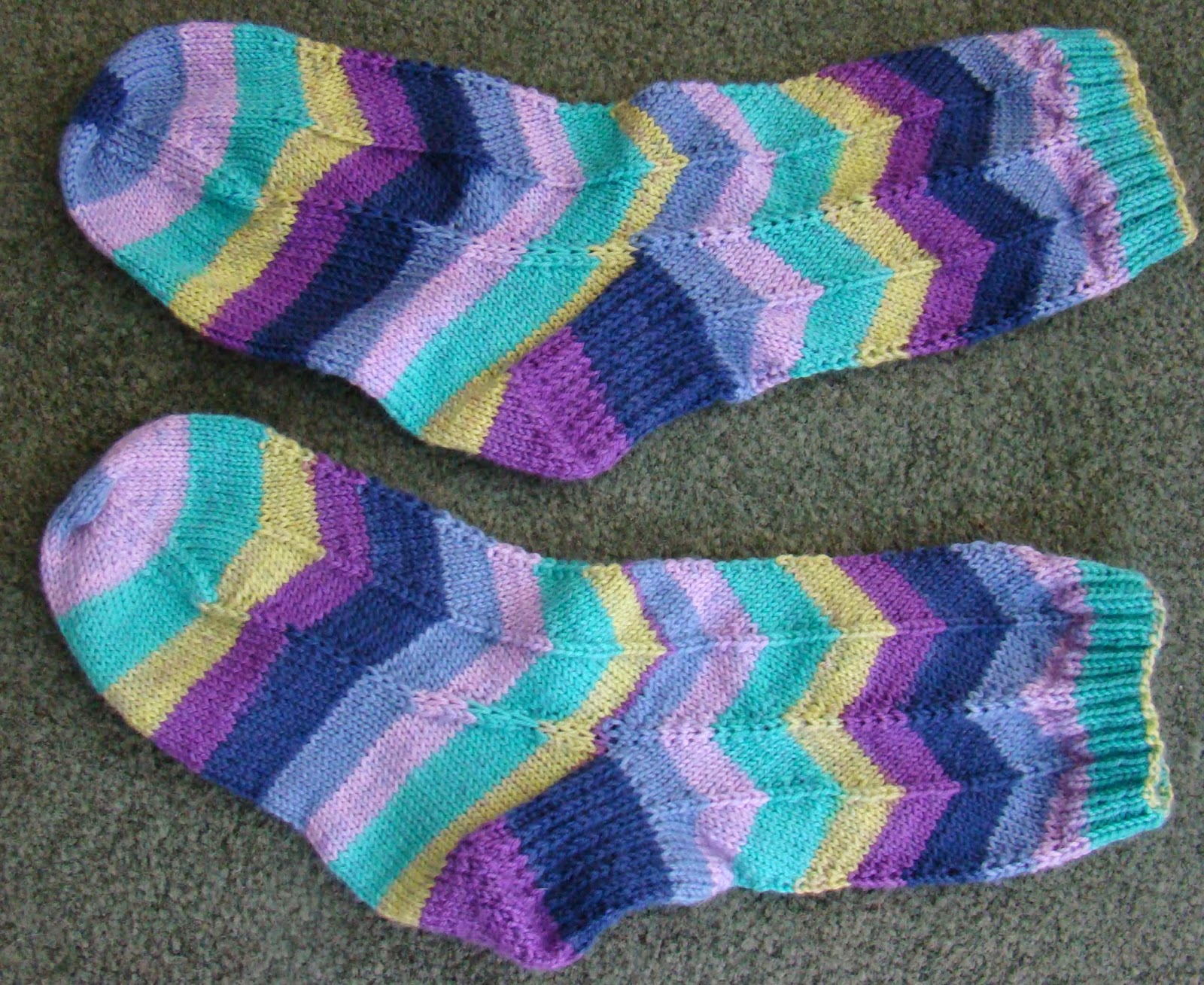 This hat was delivered to Stella last weekend.  Max's is still on the needles. 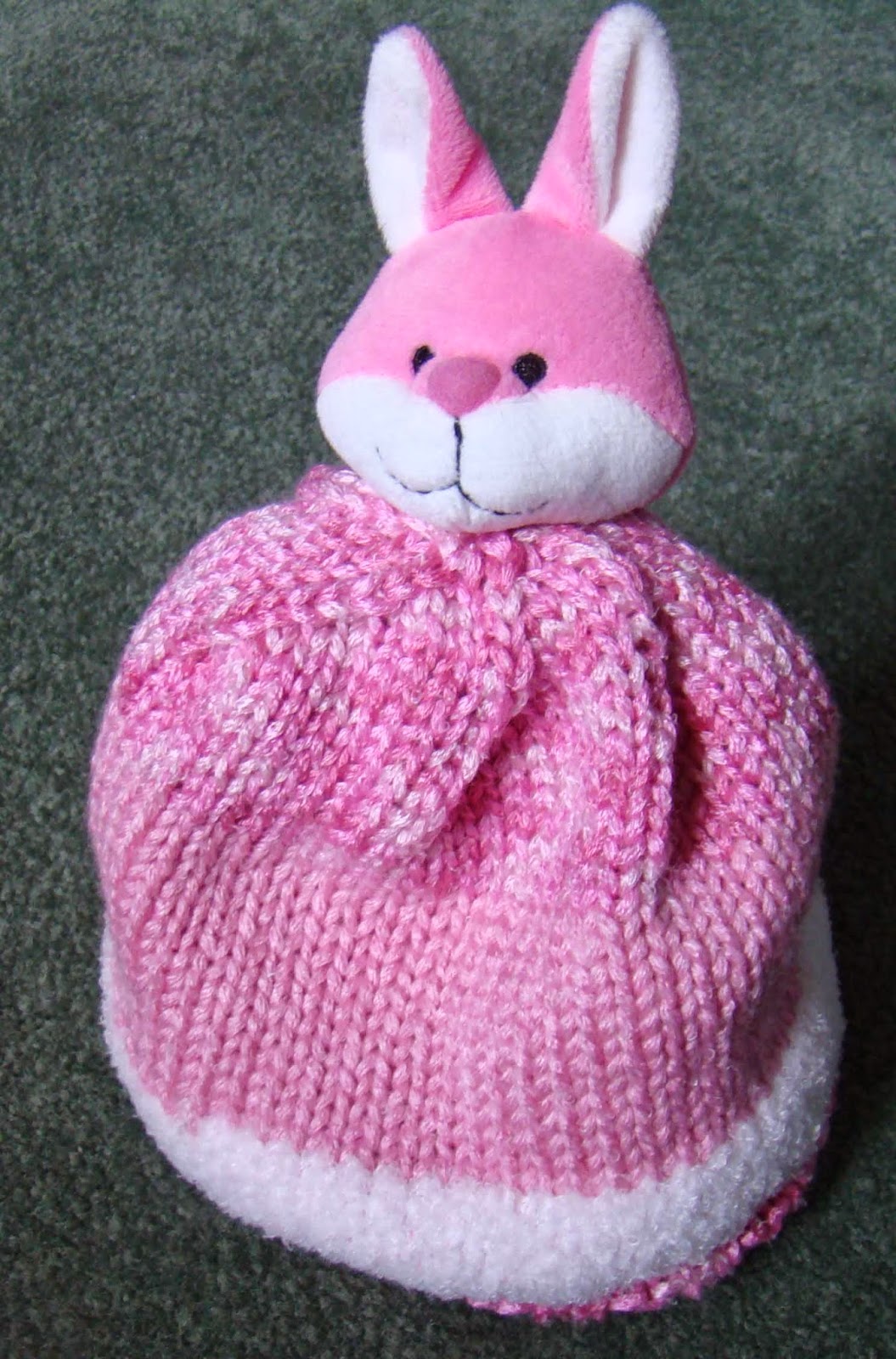 A friend's daughter recently had a little girl named Georgia, and these booties are winging their way over to her house.  That pink angora yarn was just waiting in my stash for a reason to hop on the needles. 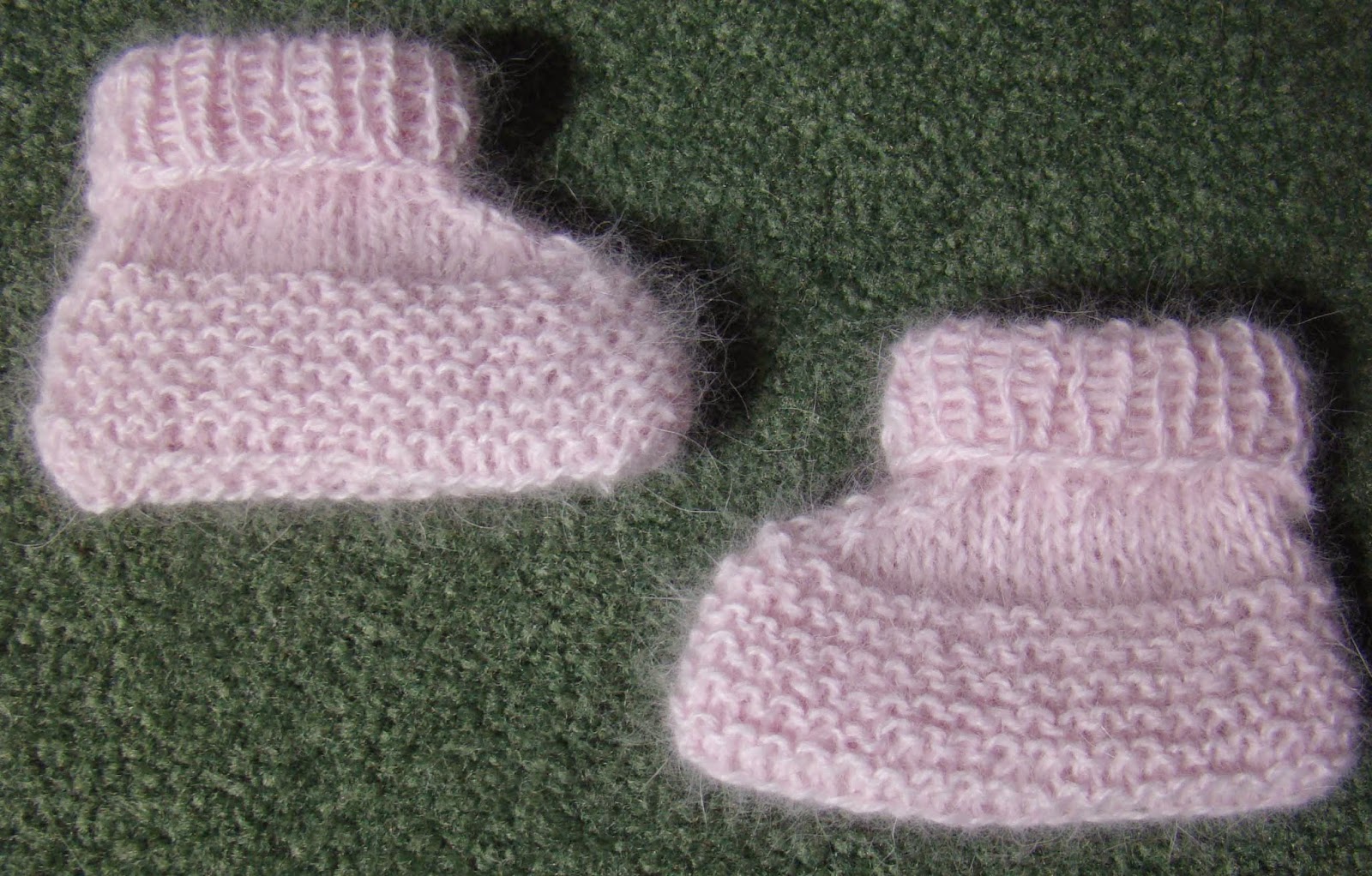 Alex and Ben are awake and wearing their sneaker booties. Whatever are they thinking/saying? Thanks for the photo, Wendy. 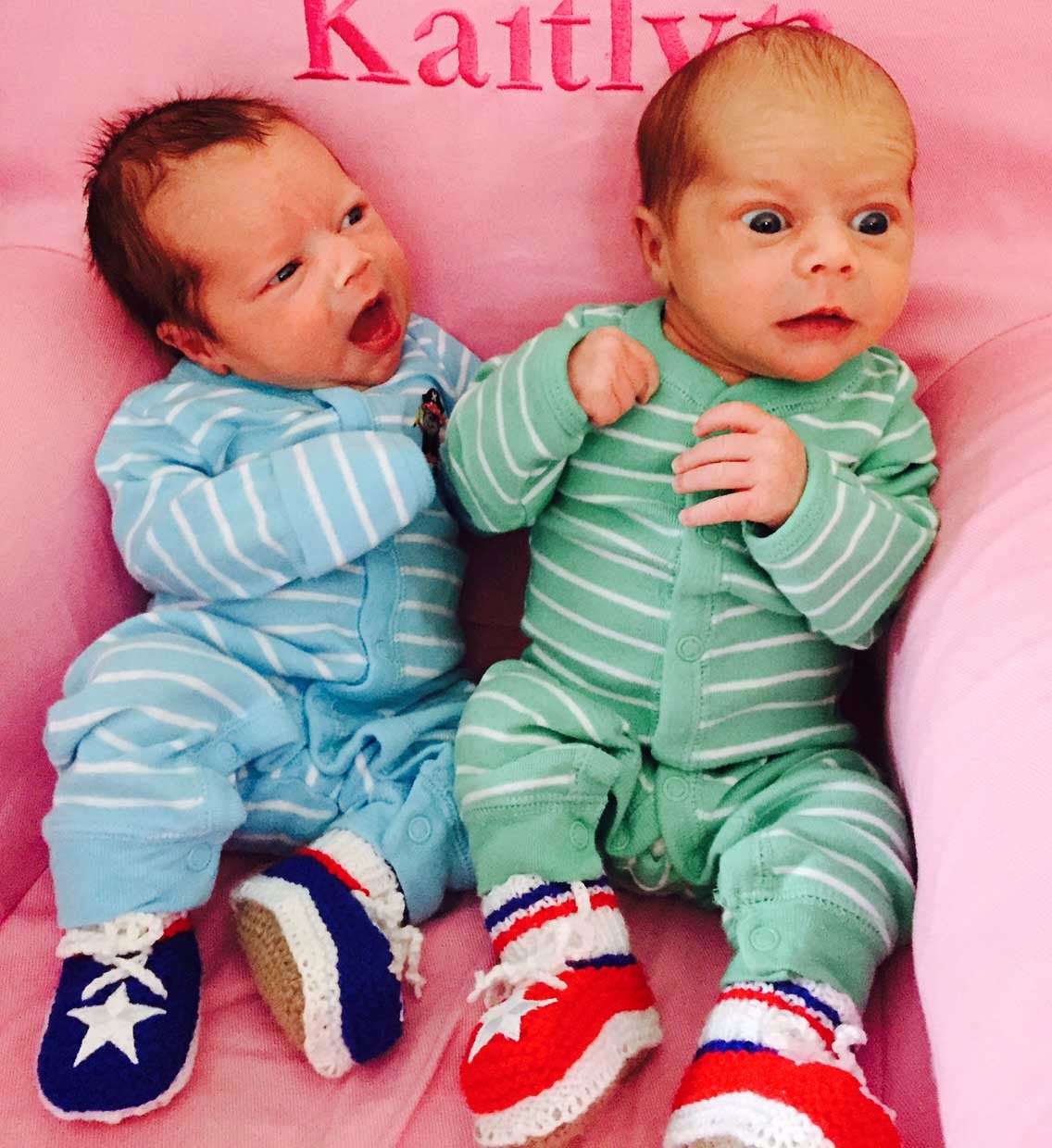 And what do you suppose this critter is searching for? 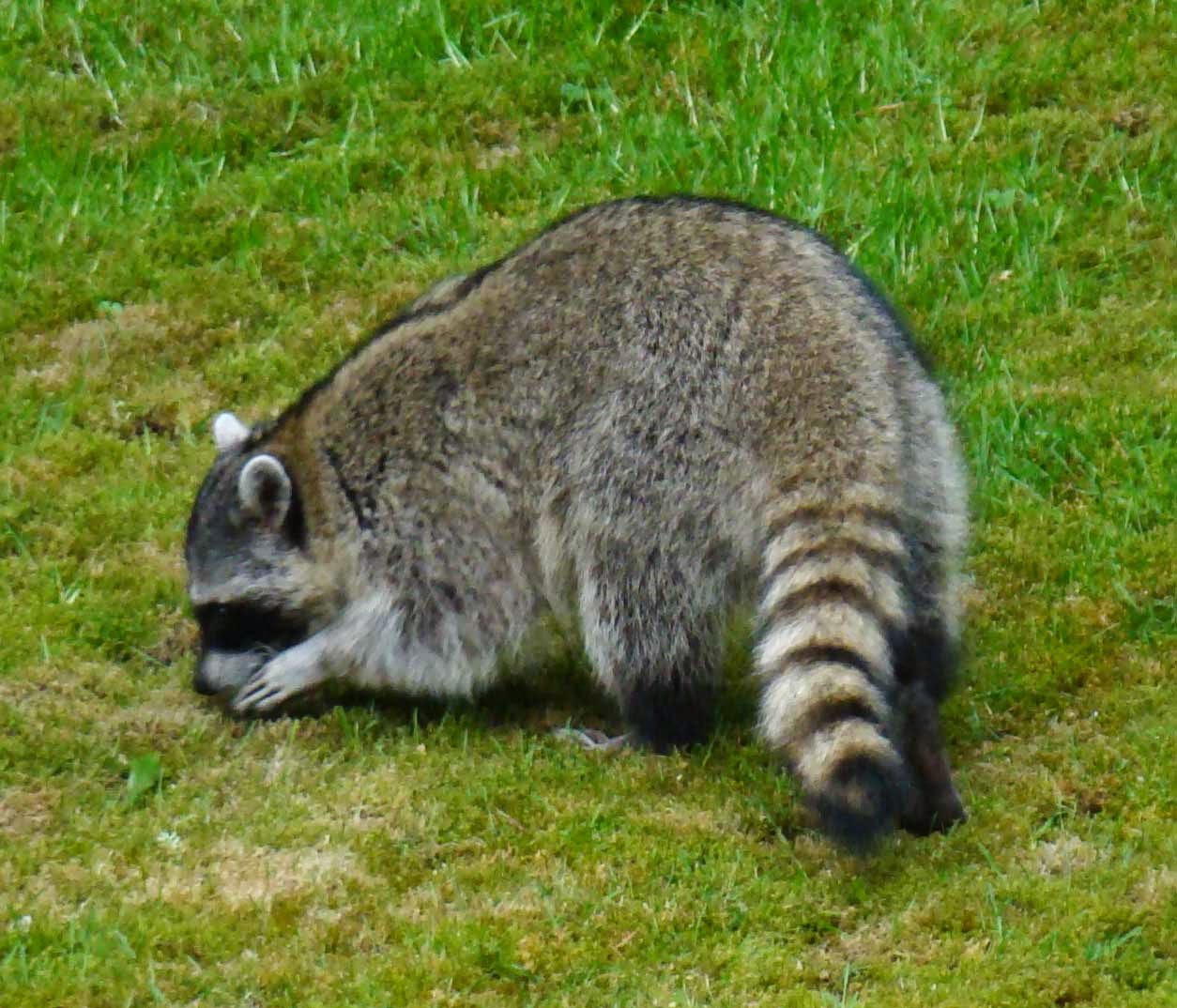 It's the first time in ages that we've seen a raccoon in our yard.  Haven't seen him since, so he must of found whatever it was!  Have a great week!  And check in with Judy to see what others have on their needles.

It's Sunny in Seattle!!!

Can you believe it, we've had 3 sunny days in a row, and 2 of them were on the weekend! That, however, has meant that not too much in the way of knitting/stitching or the like has happened here as we've been working in the yard.  I did finish a ruffled scarf for a friend who said she got so frustrated trying to knit one that she threw it away.  It's winging its way to her now, and hopefully she will like it. 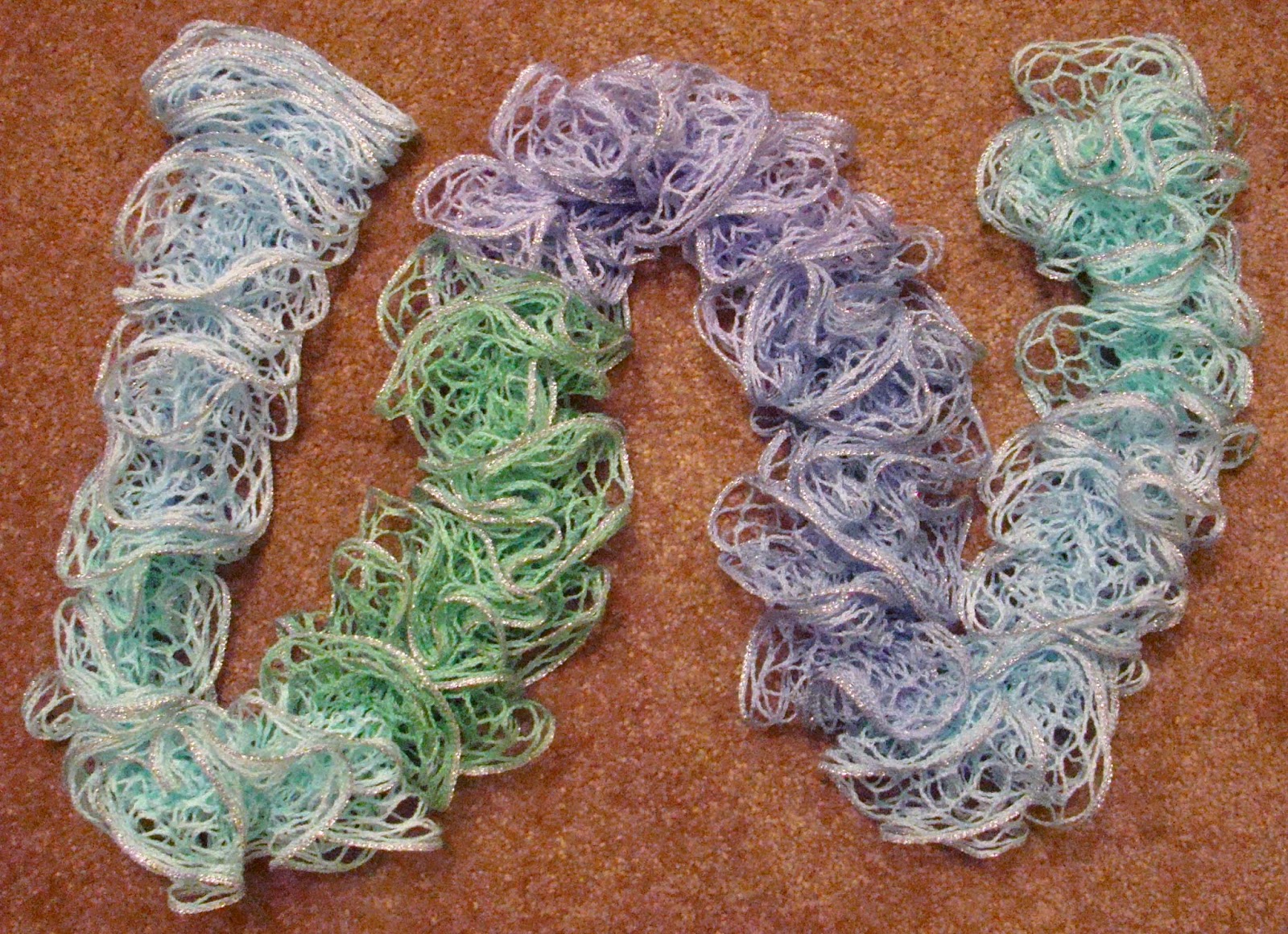 Haven't seen this guy since we got back from Chicago. I did chase a bunny today though. 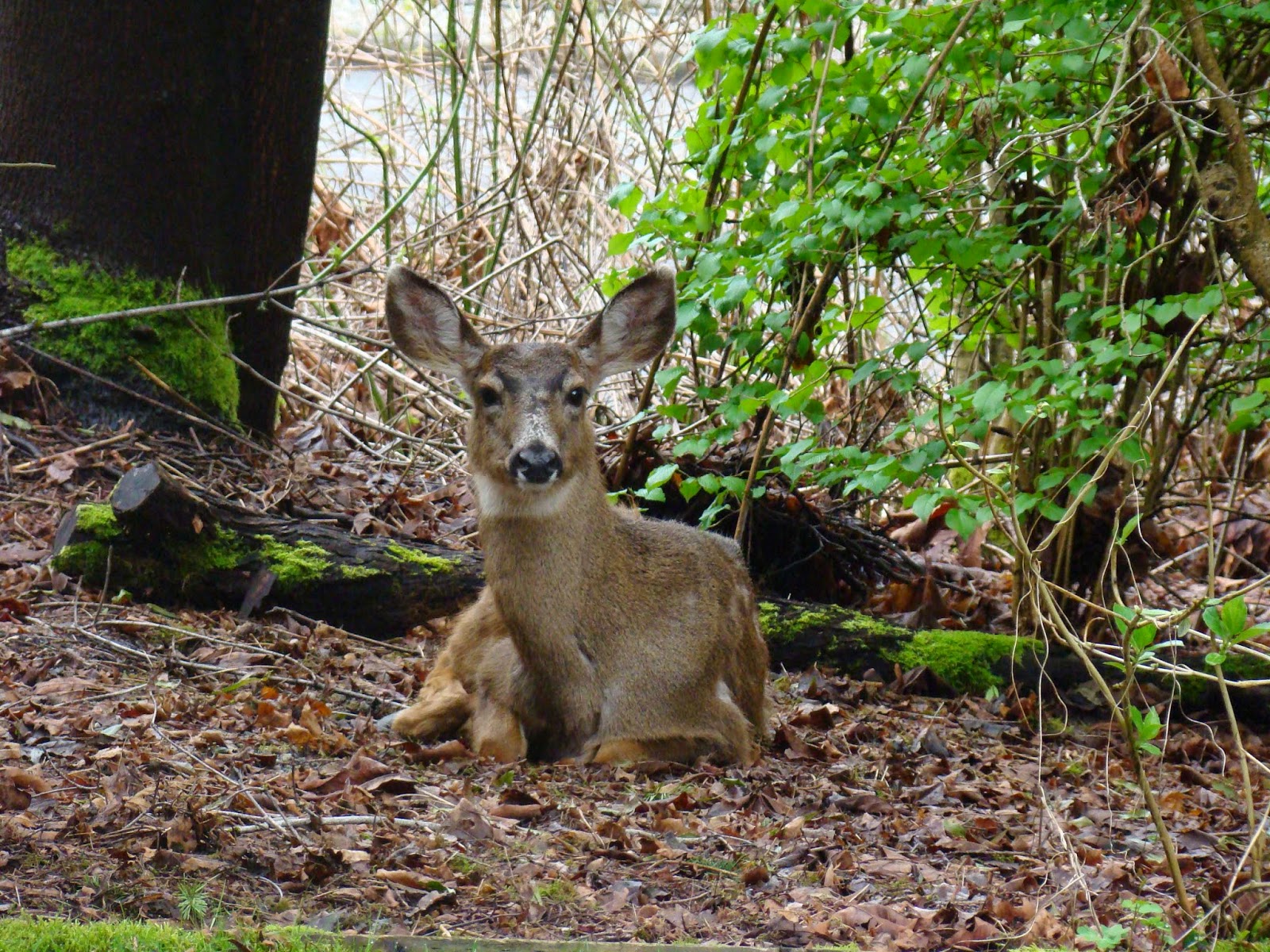 And I am very sad to report that this long-awaited flower lasted less than a week!  It was pretty while it lasted. 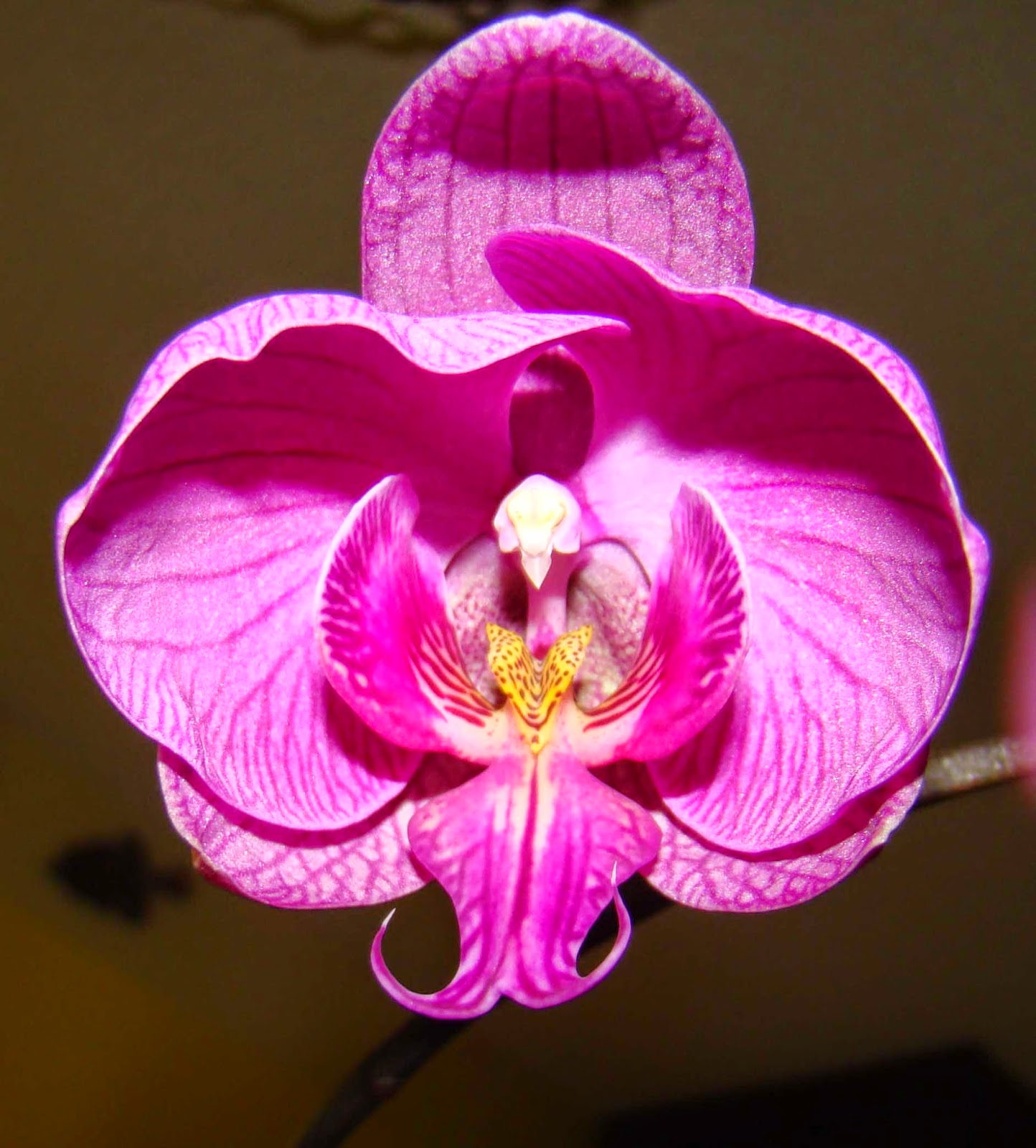 And here's another photo of the boys, our new grand nephews.  You can see that they aren't identical a bit better on this one.  Hard to believe they're almost 3 weeks old now! 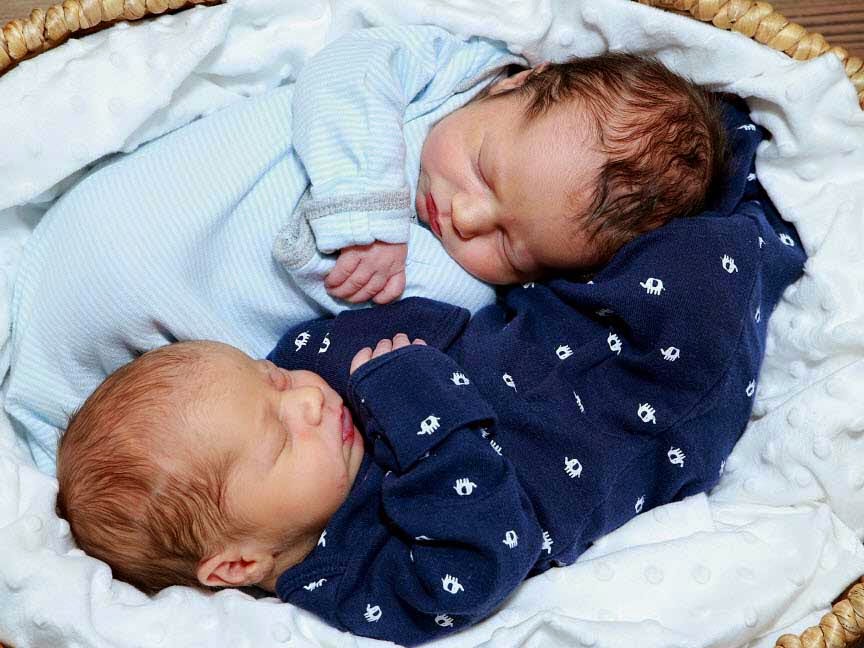 That's it for now. Happy Wednesday!
Posted by Judy S. at 9:00 AM 14 comments:
Labels: family, knitting, this and that

Off the Needles, Pair Two and a Hat!

The second pair of booties is done and both are winging their way to the East Coast along with a book for each of the siblings. Hopefully these will fit a bit longer than the small sneaker ones! 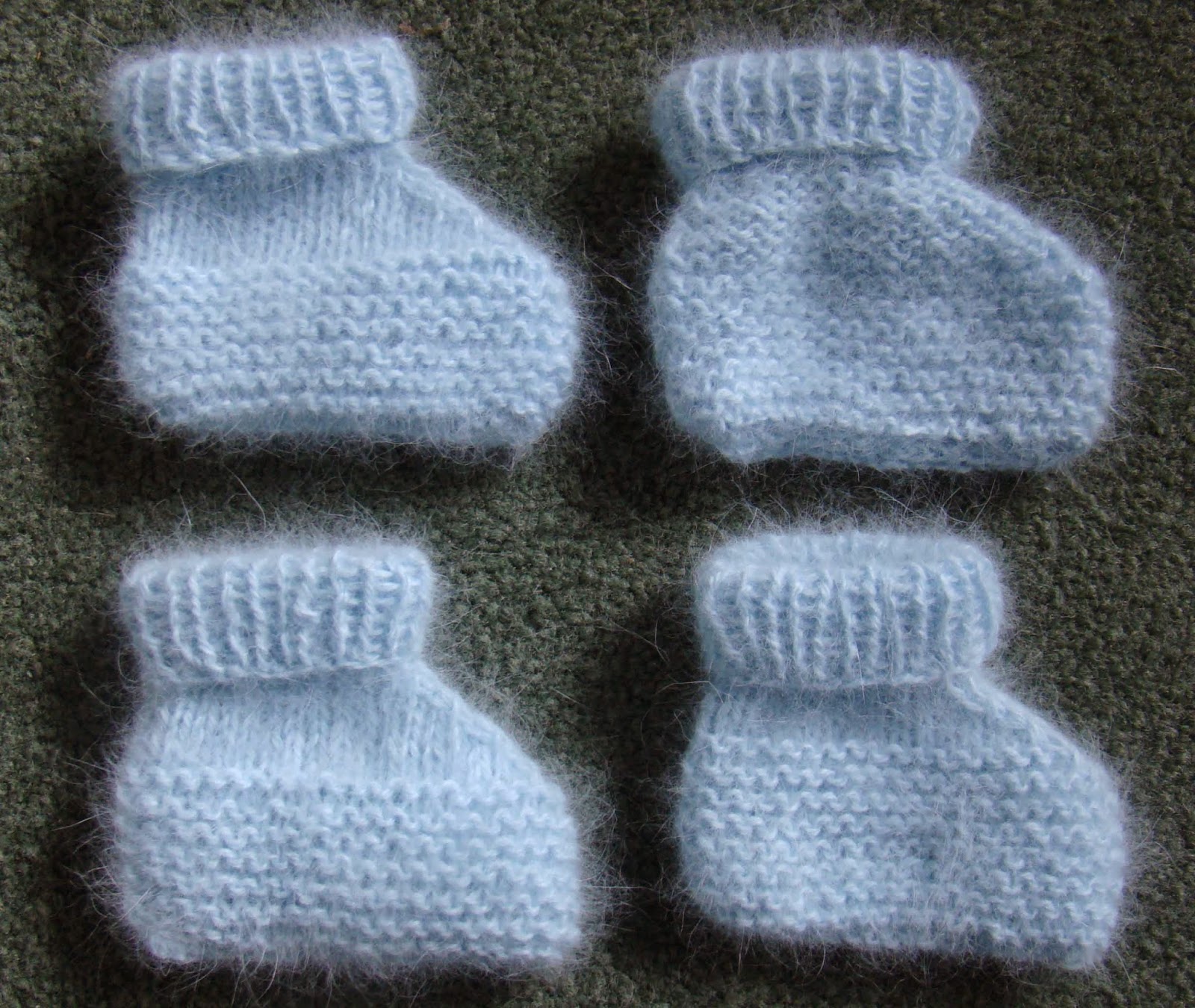 Here are the boys! (our newest grand nephews) 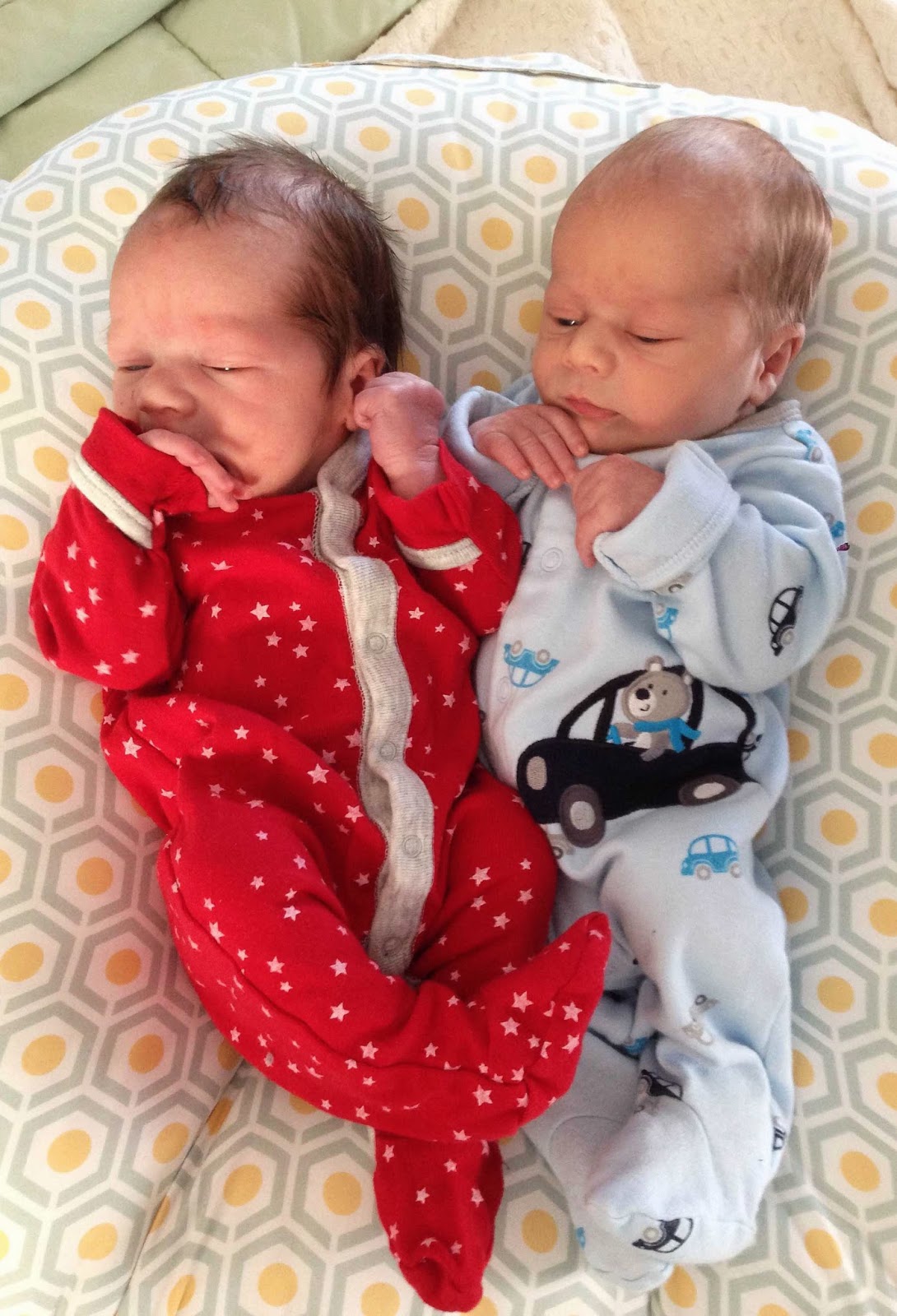 The other thing I finished this week was this hat. It's a DMC Top This! kit, and the one Sophia chose for me to make for her.  There are oh so many adorable toppers, and I found the first kit (a bunny, not made yet) at Rainy Day Yarns in Gig Harbor.  The kitty came from Webs. 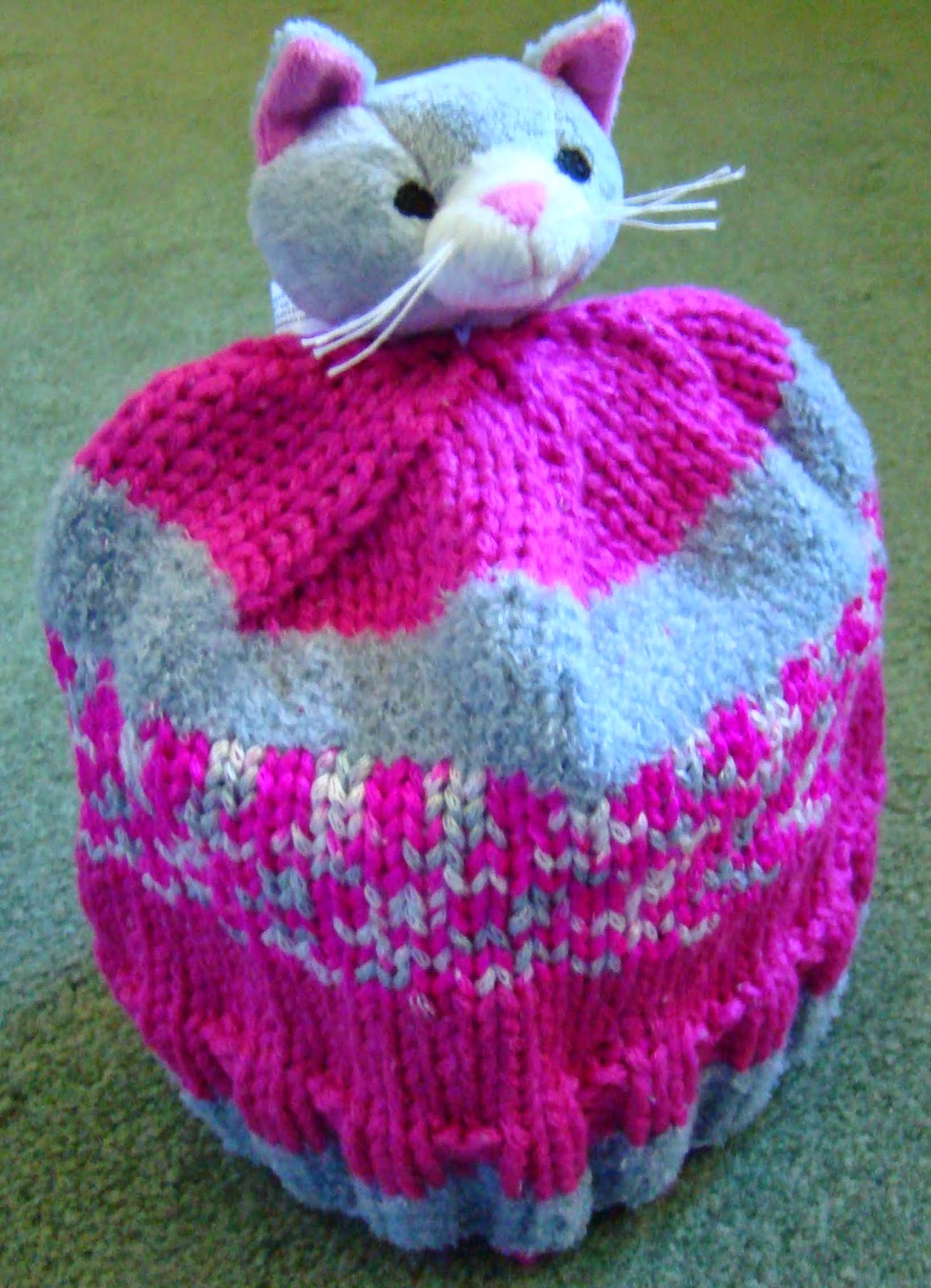 Our garden contained a very nice surprise this week: the trillium (wake robin) is in full bloom! 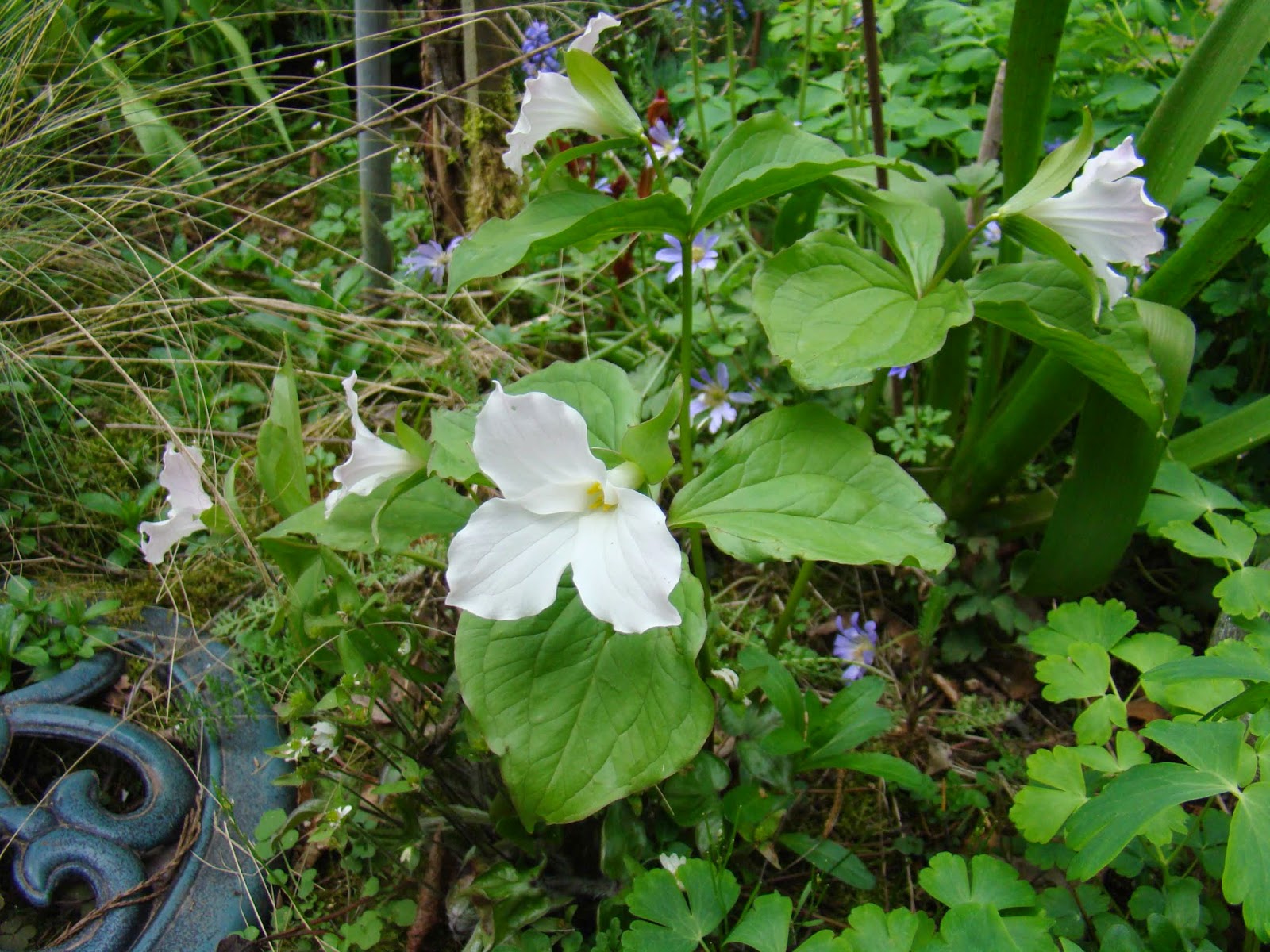 Yes, spring is definitely here.  We still have cool nights, but just looking down our street, you can see lots of the signs. Hurrah for spring! 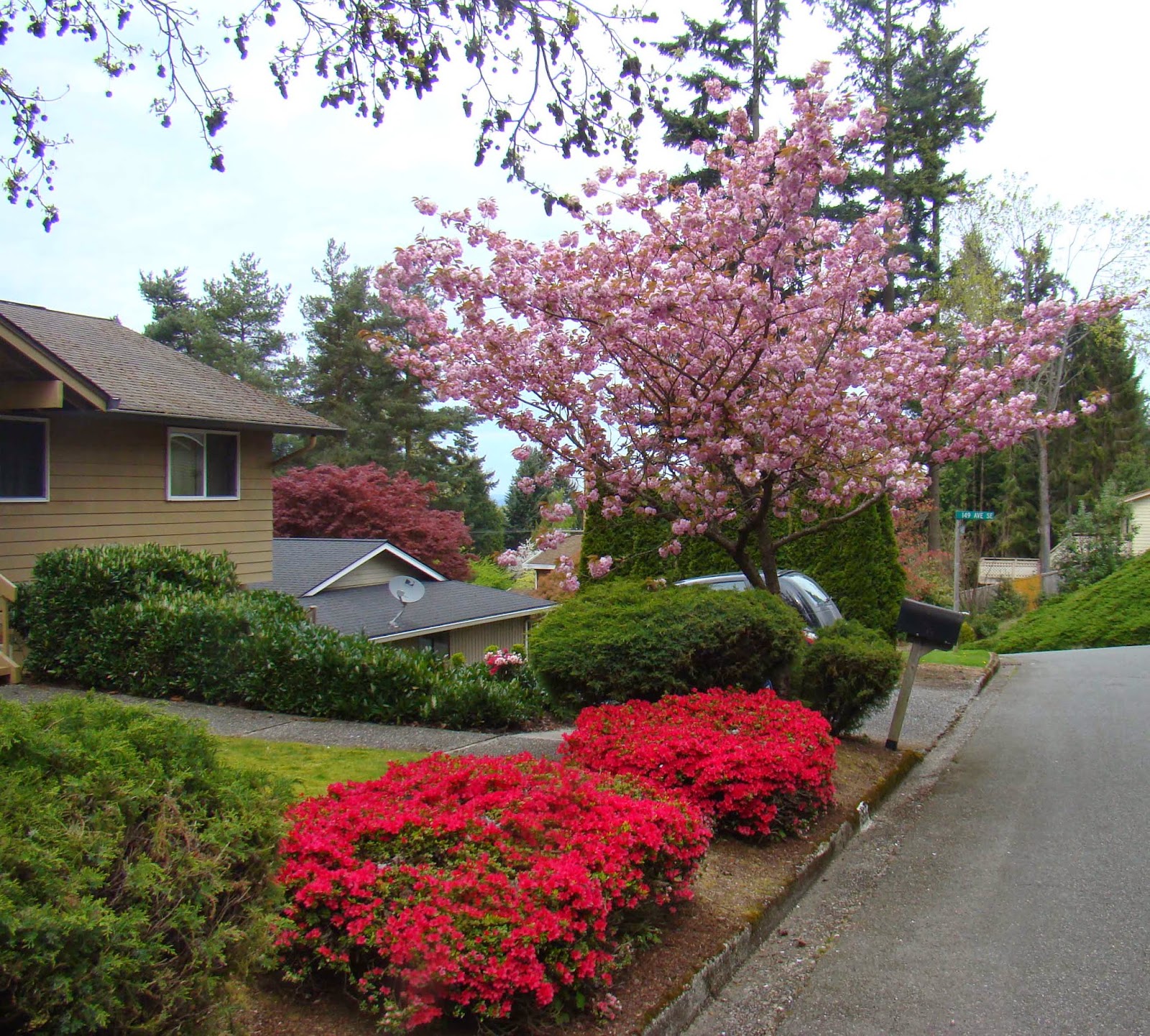 Check out Patchwork Times to see what others are knitting when they aren't out working in their garden.

Serendipity, that's what it was!  Just before we left for Chicago and Sophia requested that I teach her how to embroider, Susan put a link on her blog to  Hoop-a-Loops ; so I ordered the Lil' Gala kit which arrived in time for me to take along. The kit included everything necessary for the project and was a perfect and simple introduction to straight stitching. Most importantly, Sophia loved doing it. She finished it before we left, and I told her I'd make her a little pillow with it. Here's the stitched apple. The pattern was marked on the fabric with the colors of thread to be used. (All the thread, a needle and hoop were included!) 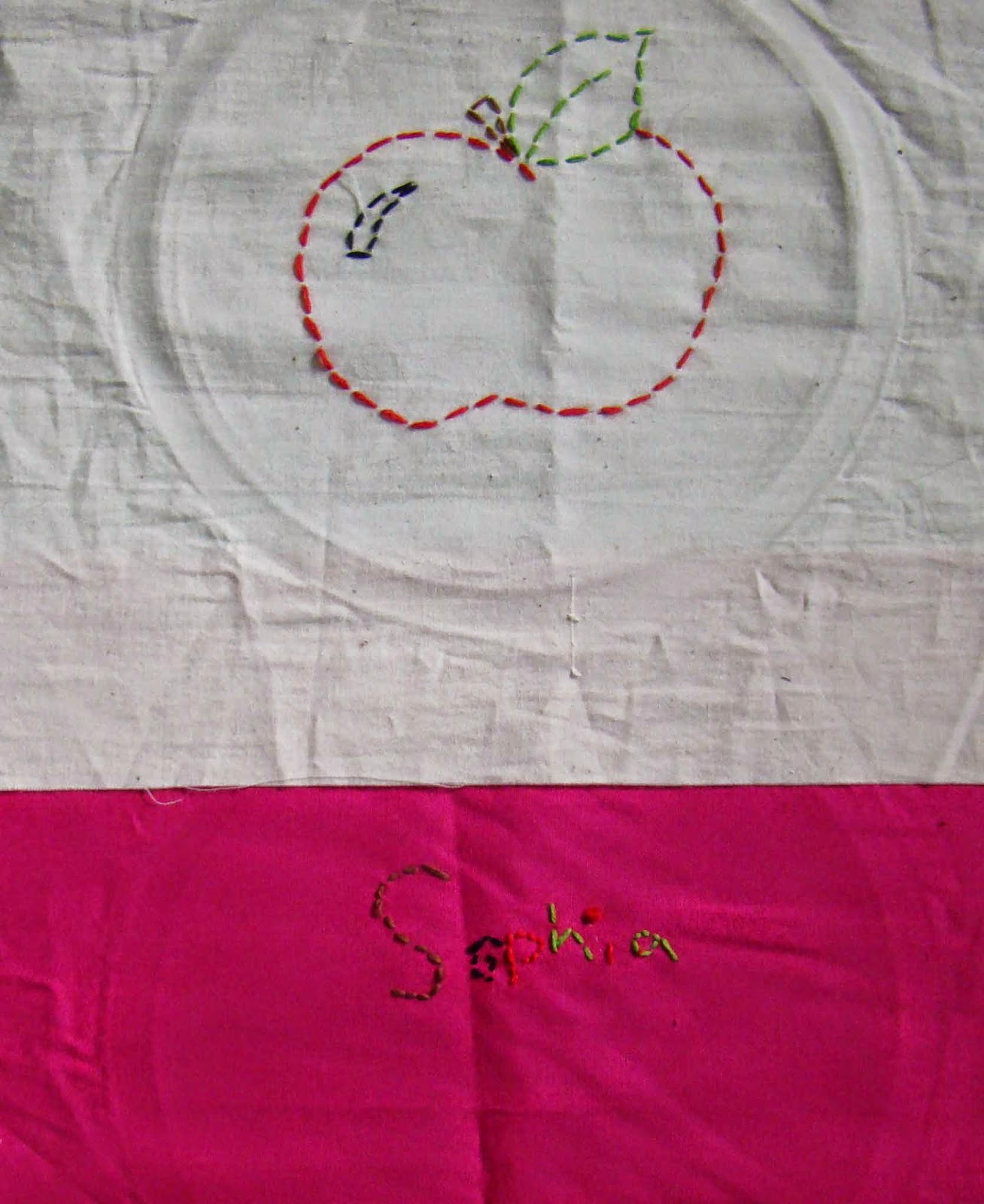 Then Mom found another piece of fabric (leftover from Halloween costumes).  Sophia had caught on by then and printed her name on the cloth.  Then she chose the colors from the leftover apple thread and stitched her own name. 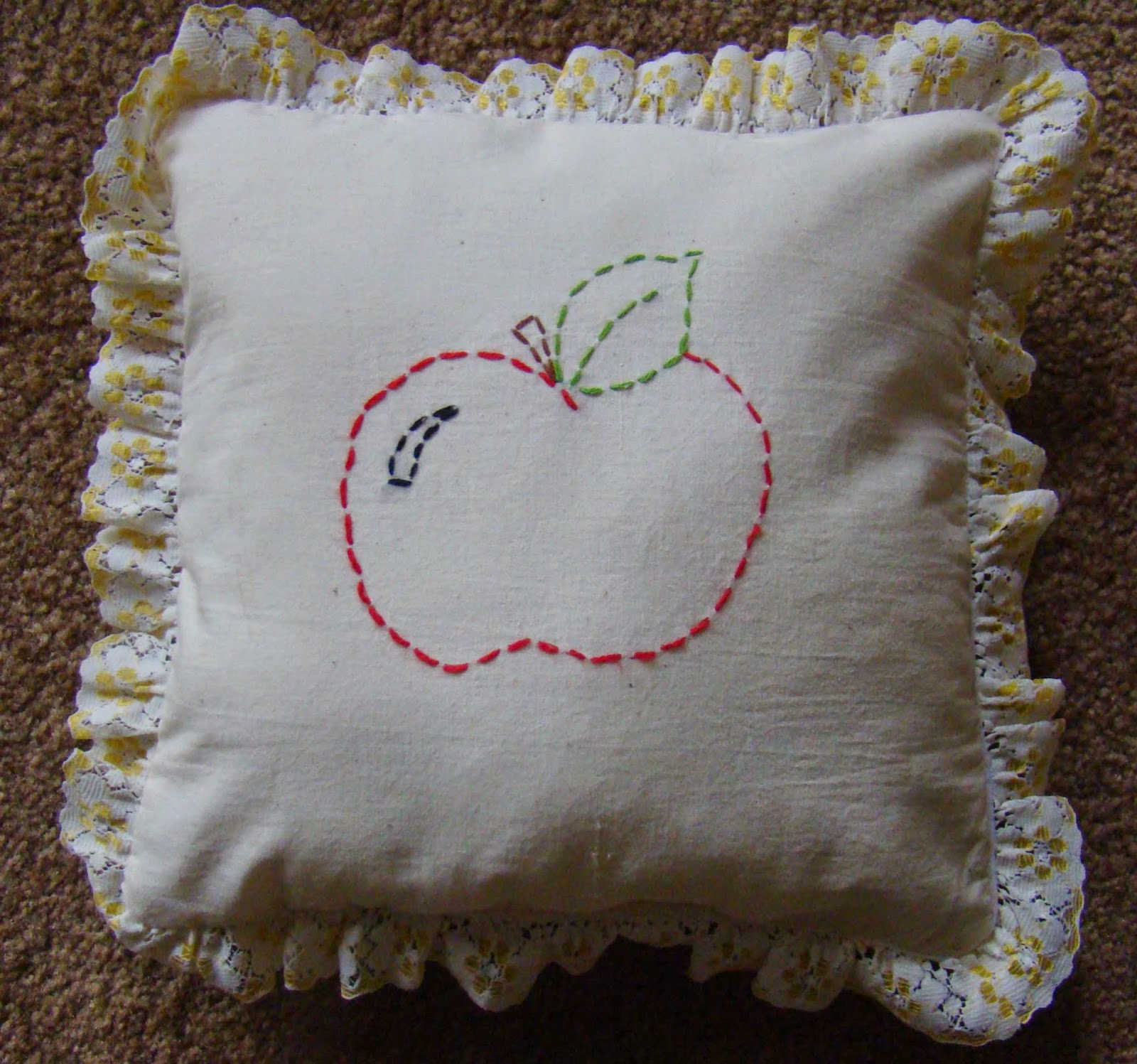 Here's the front side of the pillow and..... 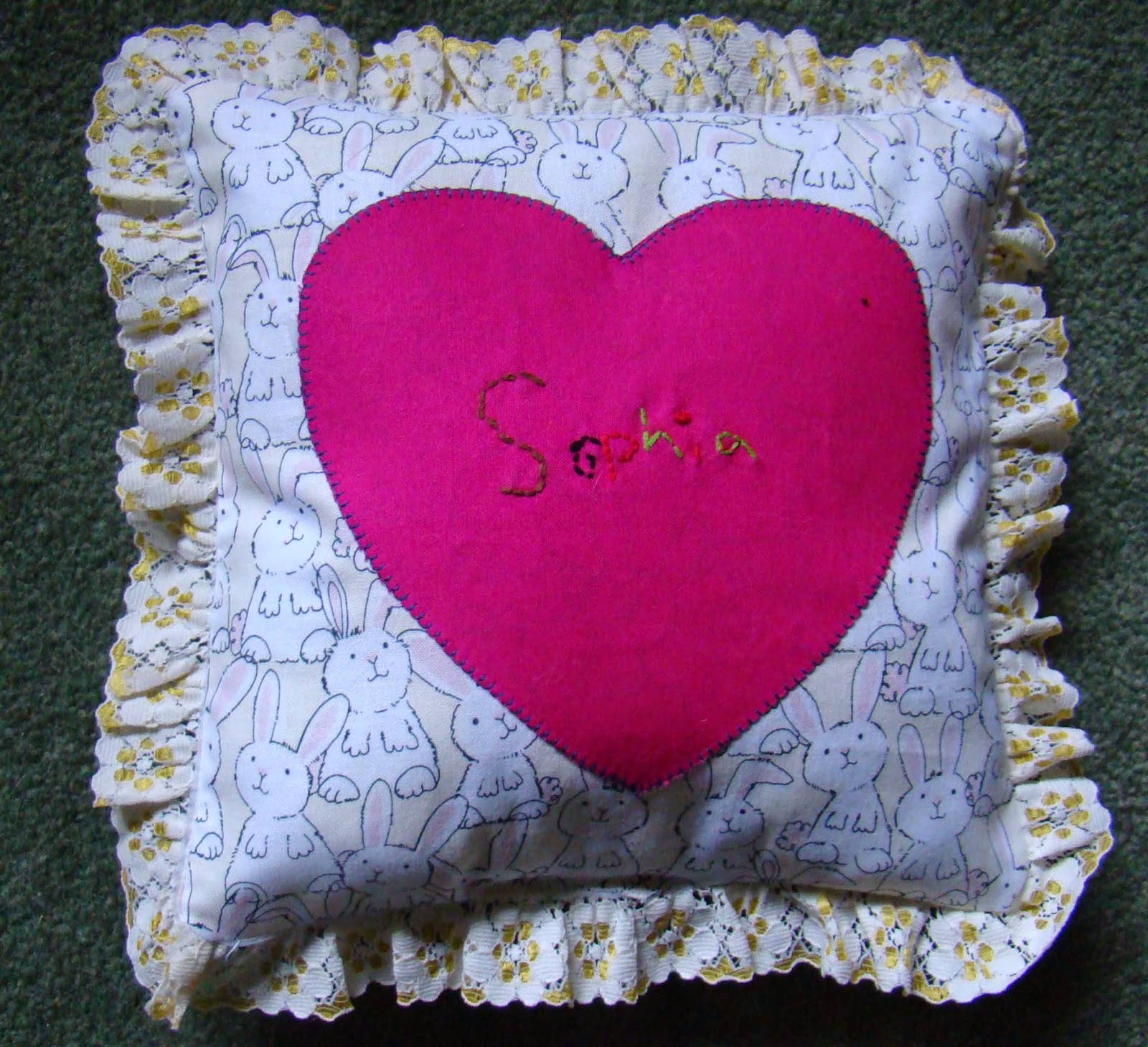 here's the back.  I hope she likes it!

It's heading off back to Chicago very soon. BTW, I had as much fun as she did! Thanks, Susan!
Posted by Judy S. at 5:06 PM 9 comments:
Labels: embroidery, grand kids

Travel Knitting Off the Needles!

While we were in Chicago, our family received exciting news: the twins arrived very early on April 2nd and weighed in at 6 lbs. 13 oz. and 6 lbs. 9 oz.!!! Mama and boys are home doing well, and I am sure they are happy to have Bebob and Nana there helping out.  I was highly motivated to finish these hats and booties and get them mailed before they were too small. 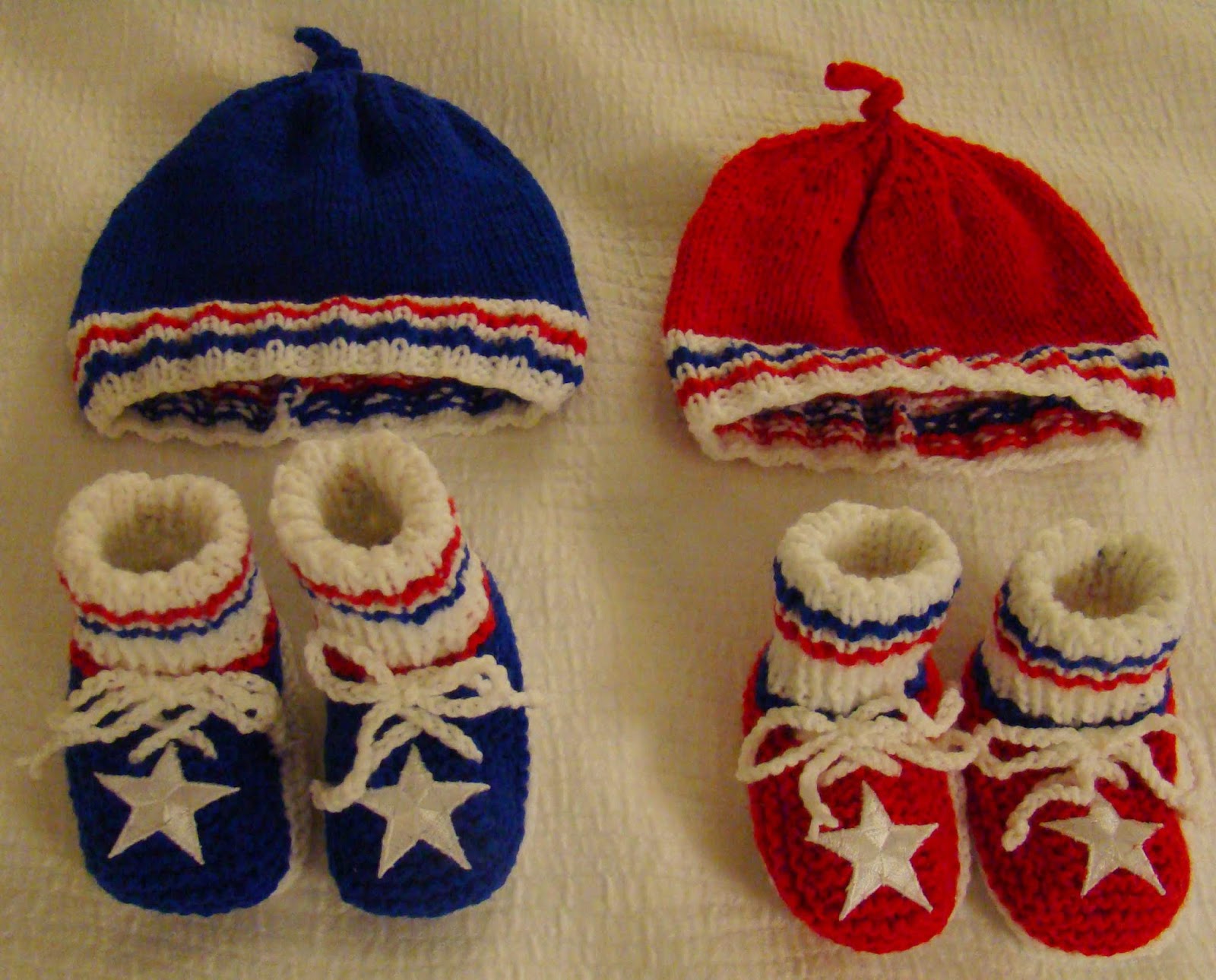 Now I am working on a couple of larger booties that should last a while longer. One pair is done and the other will be exactly like them. The second pair is well under way, and I hope to finish them over the weekend. 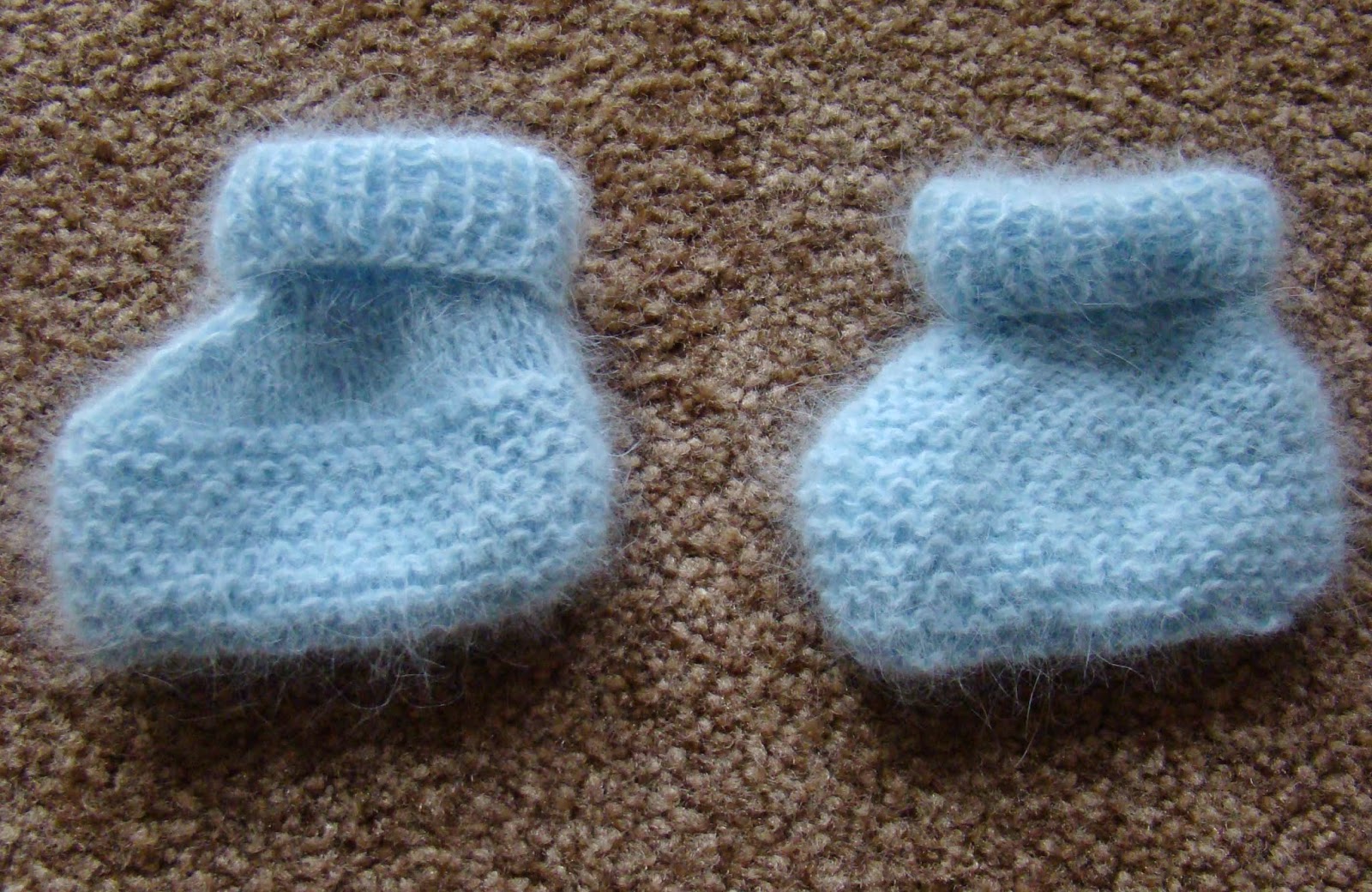 My other finish was another short row scarf.  I love that pattern!  This time the yarn is Plymouth's Gina. 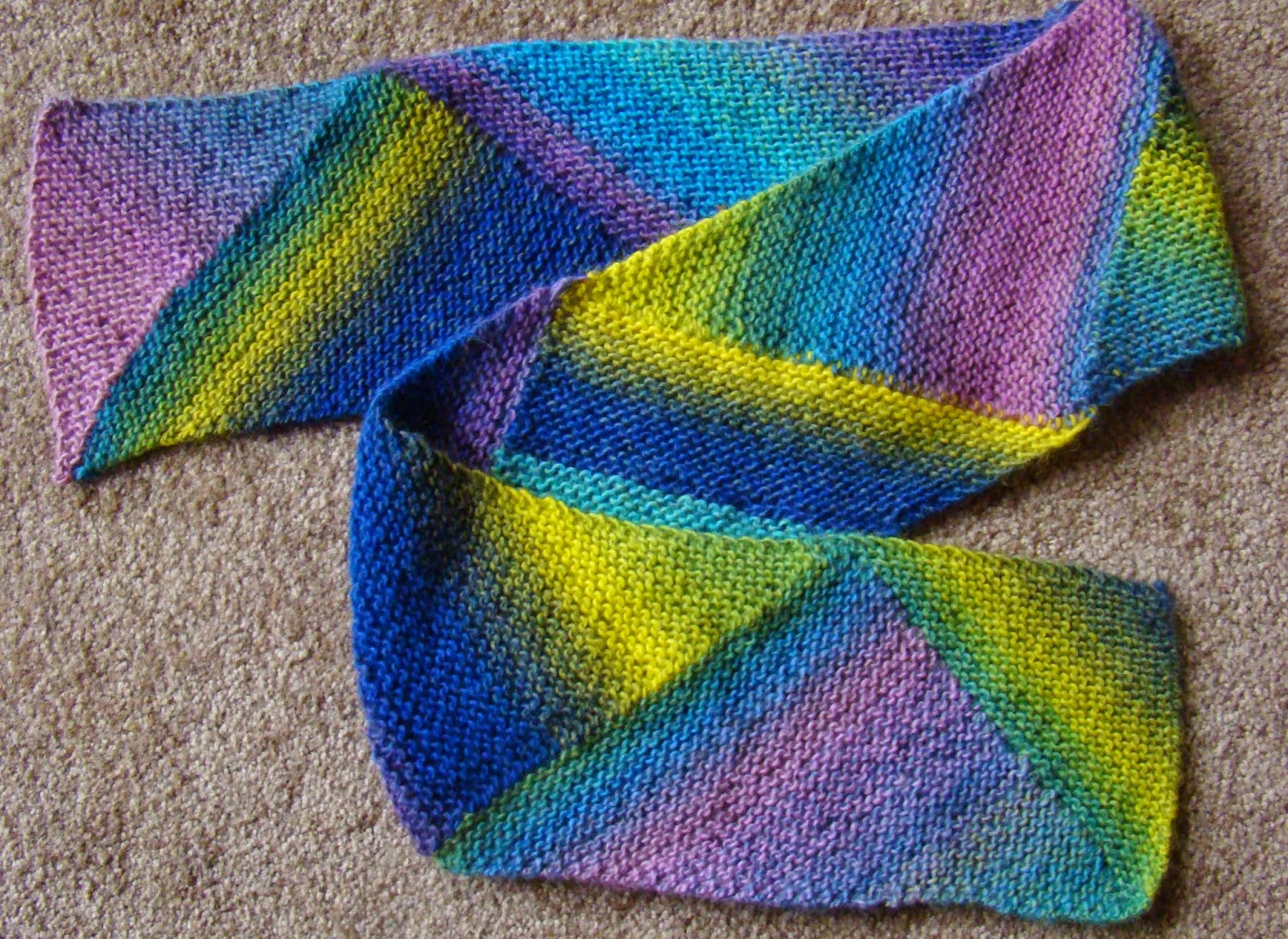 No sign of the deer this week, but look what welcomed us home!  Some years ago DS gave me this azalea tree for Mother's Day, and each year it's prettier. (Looks like we need to do some raking, doesn't it?) 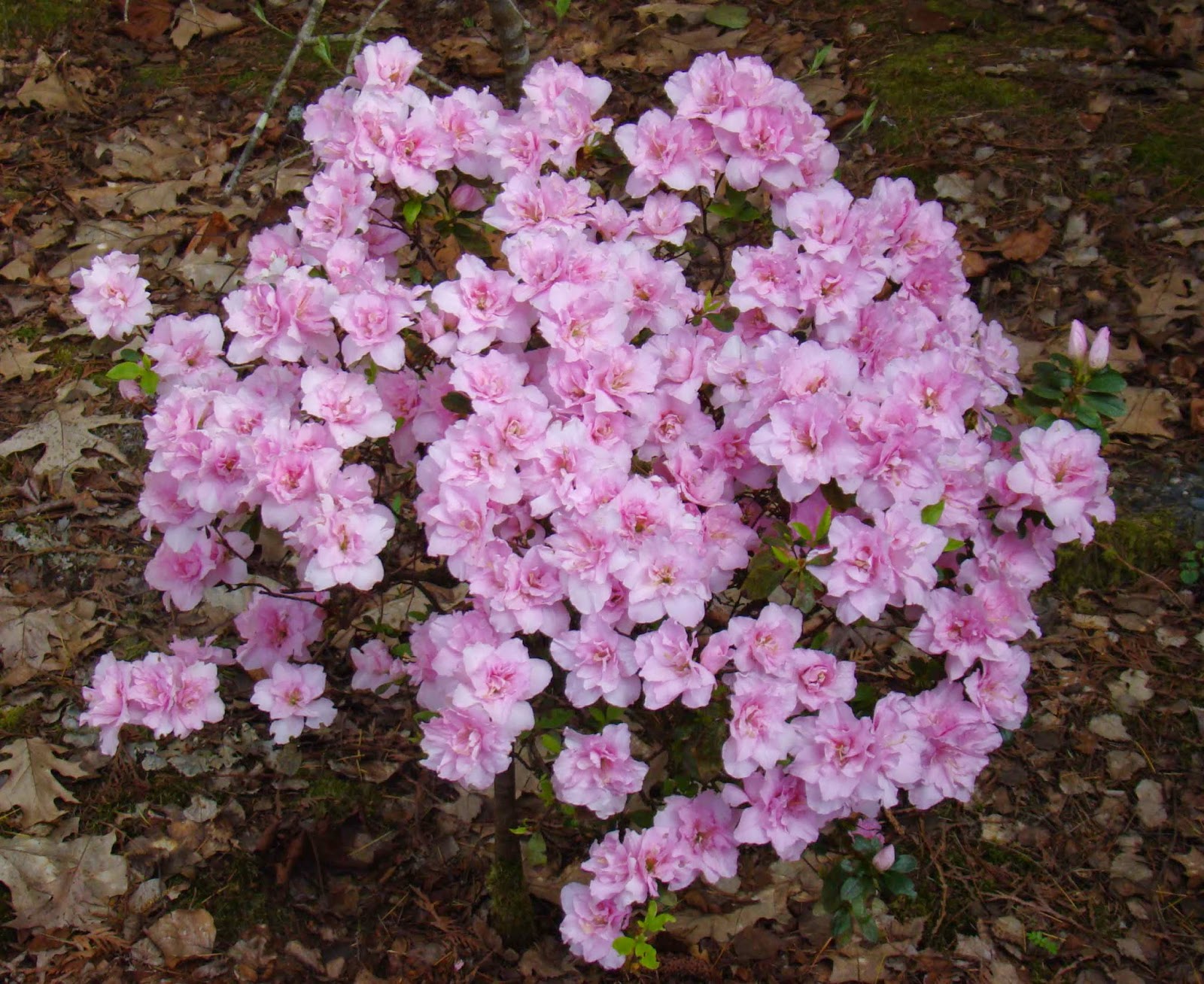 Bye, I'm off to make a dessert to take over to the local GKs' house tomorrow. Have a great weekend! And check out Patchwork Times to see what others are knitting.

We just got back late last night after spending Easter and a quick week with our older daughter's family in Chicago. What a whirlwind!  We played with the grand kids, met their chickens and cats, cooked lots of meals and visited friends and relatives. It was great fun! 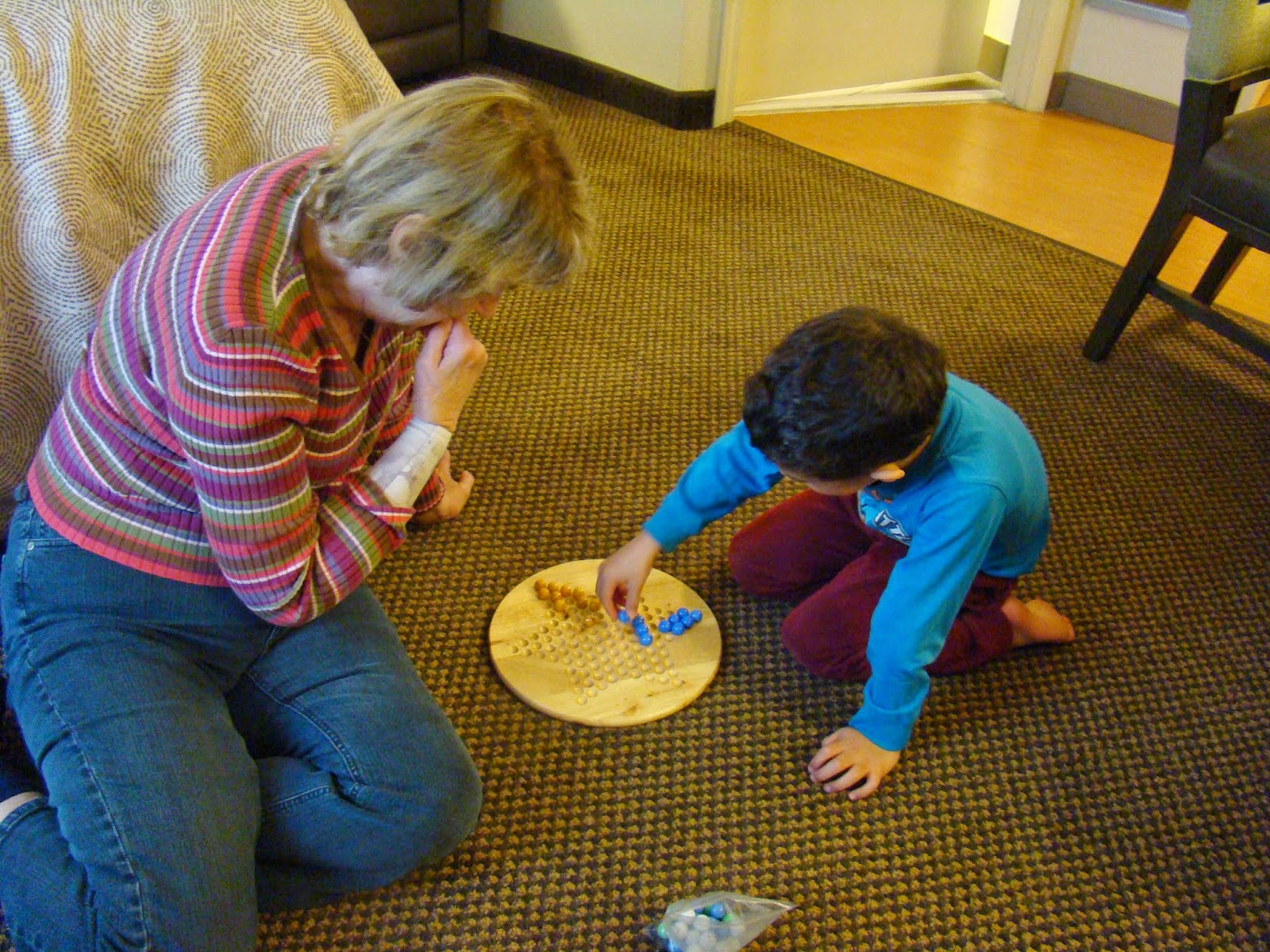 One morning while Mom was at her Bible study, Daniel and I entertained ourselves by trying to play Chinese checkers. It was more fun sorting out all the marbles, but at least we tried. Tic-Tac-Toe turned out to be a more popular choice, and Daniel has vowed to practice hard before we meet again in the summer. 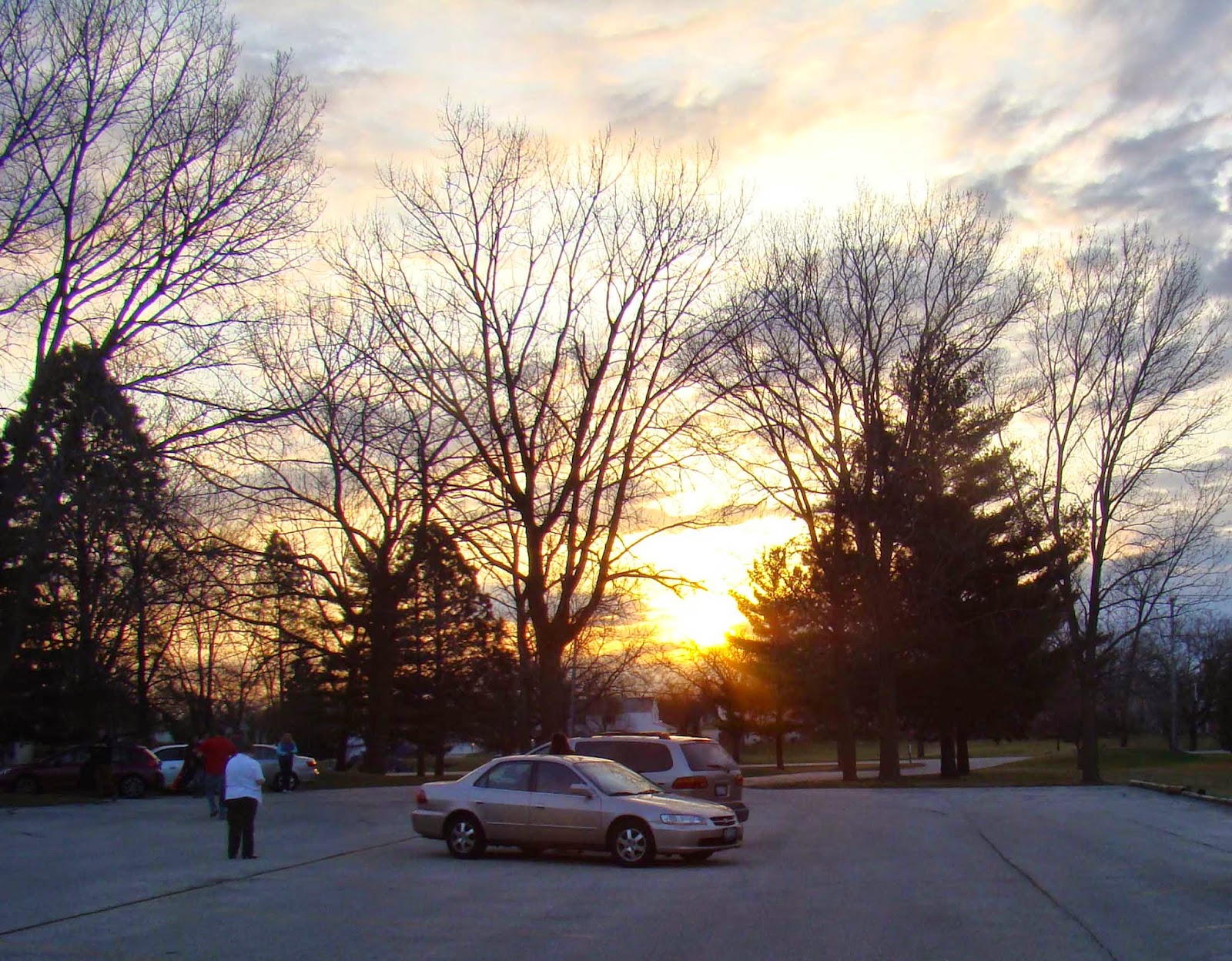 On Easter morning, before the service began, we were treated to a beautiful sunrise. (And we tried not to think what time it was back in Seattle!) Their church's traditional sunrise service starts with everyone gathering at a bonfire next to the church. 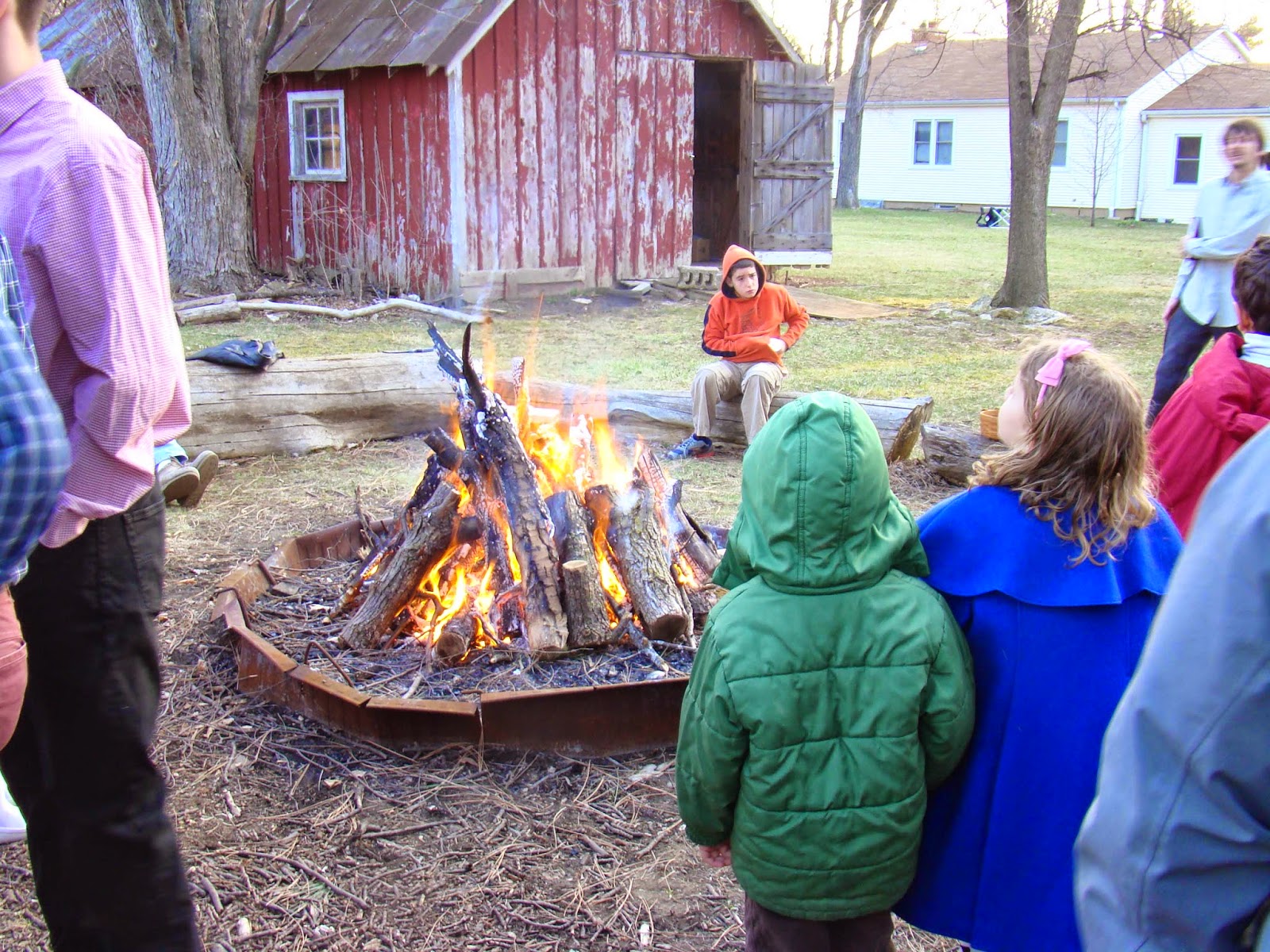 It was a chilly morning and the fire helped keep everyone warm before they proceeded into the church carrying candles. 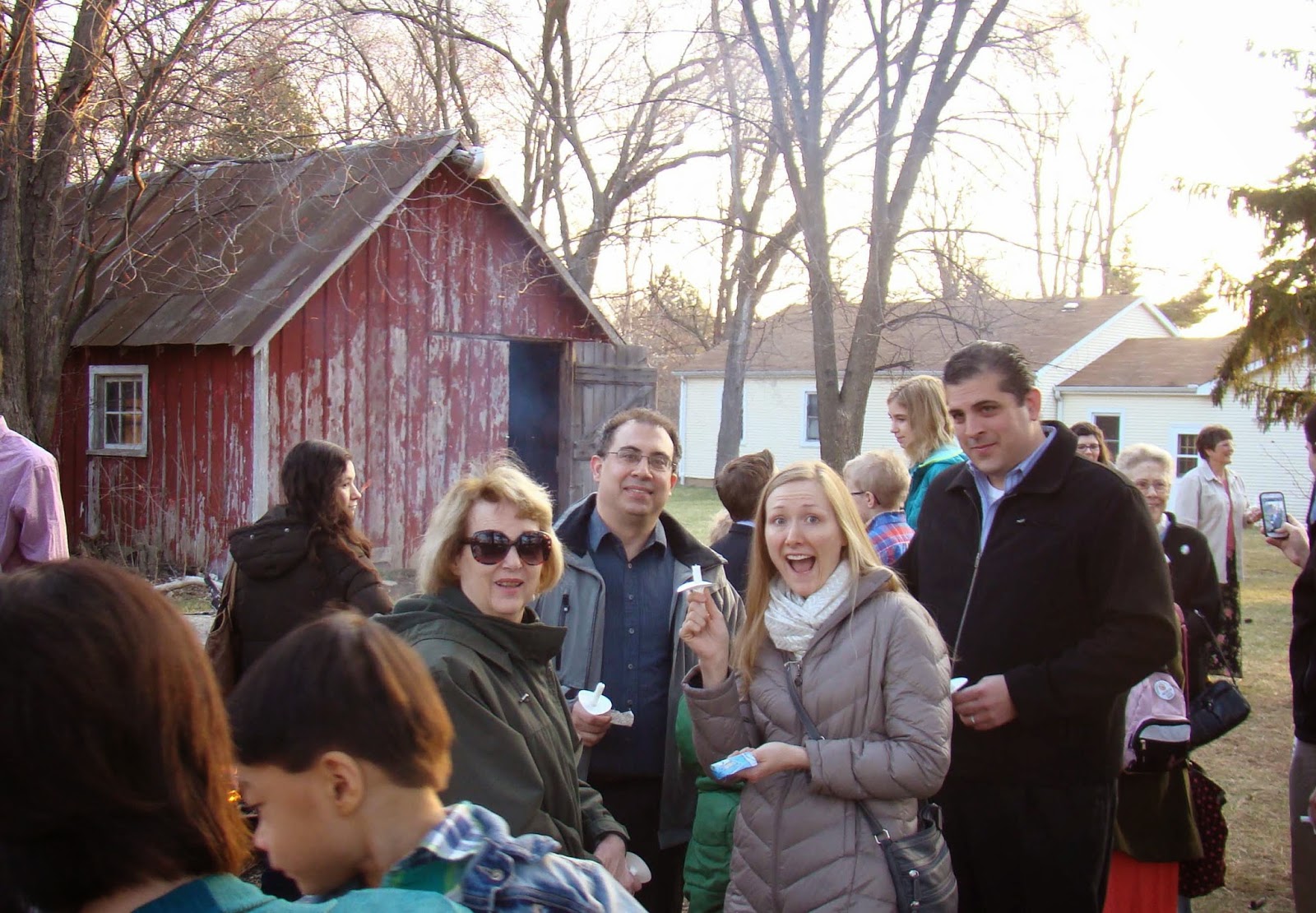 Aunt Jessica and Uncle Armen were there, too.

It was an interesting service that included an enactment of the Creation story and the events leading up to the crucifixion of Jesus.  For us, though, the highlight was being present at David's baptism. Here he is reading his statement prior to being immersed. We'd never seen this kind of baptism before, and it was very moving.

This is the first time we've visited during the school year when Sophia and David were gone during most of the days.  We had time together though in the evenings. Here's Sophia with Red Bear, her favorite doll that was given to her by our neighbor when she was a baby. Red Bear is wearing the outfit Grandma T. brought back from Hawaii. (They were just back from their vacation, and we had a lovely lunch together on the Saturday before Easter.) 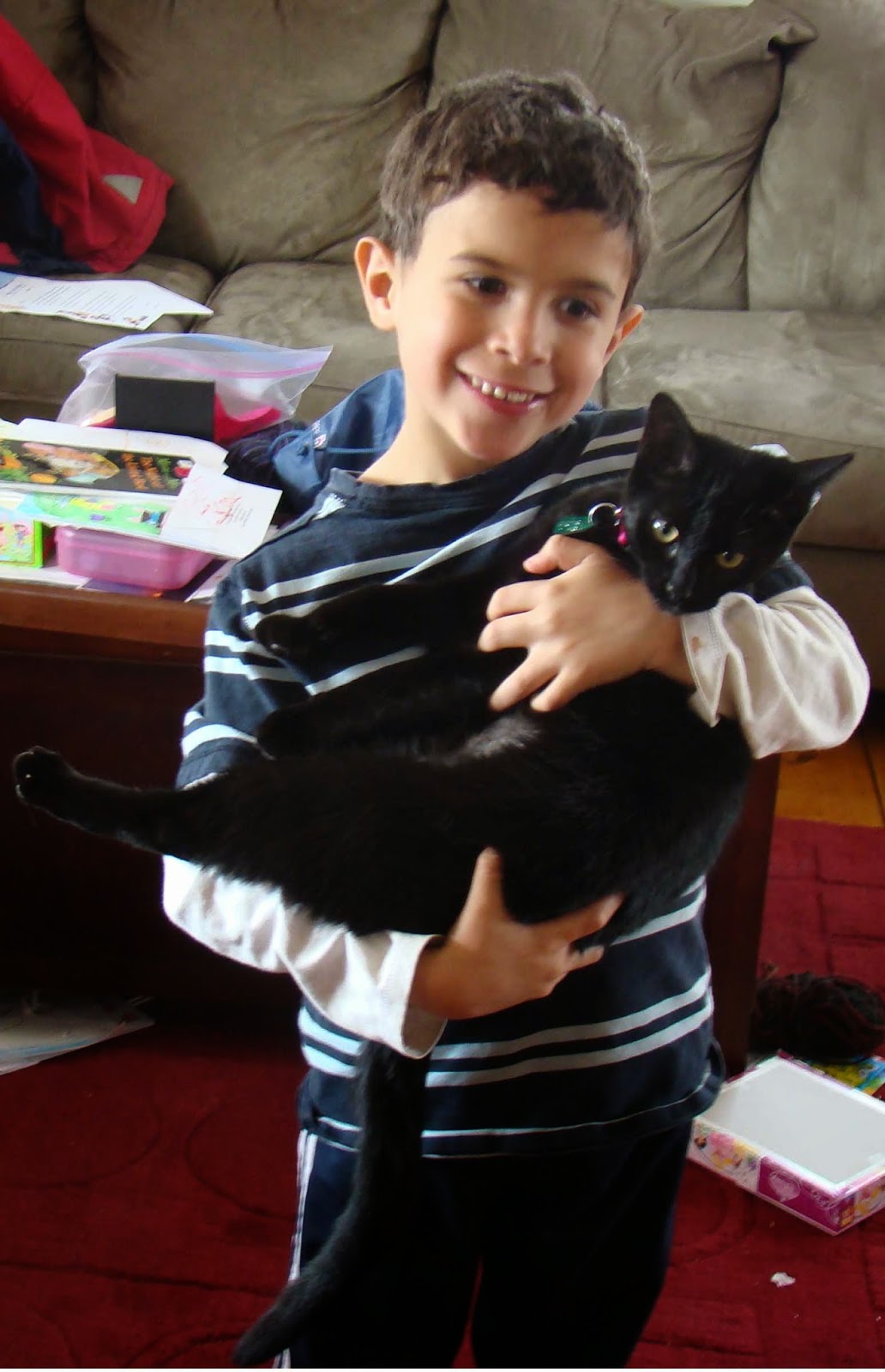 Here's Daniel with Annie Cat. She's just a kitten and was adopted by the family  along with her Mama earlier in the year. She is very mischievous and interested in everything, including knitting! 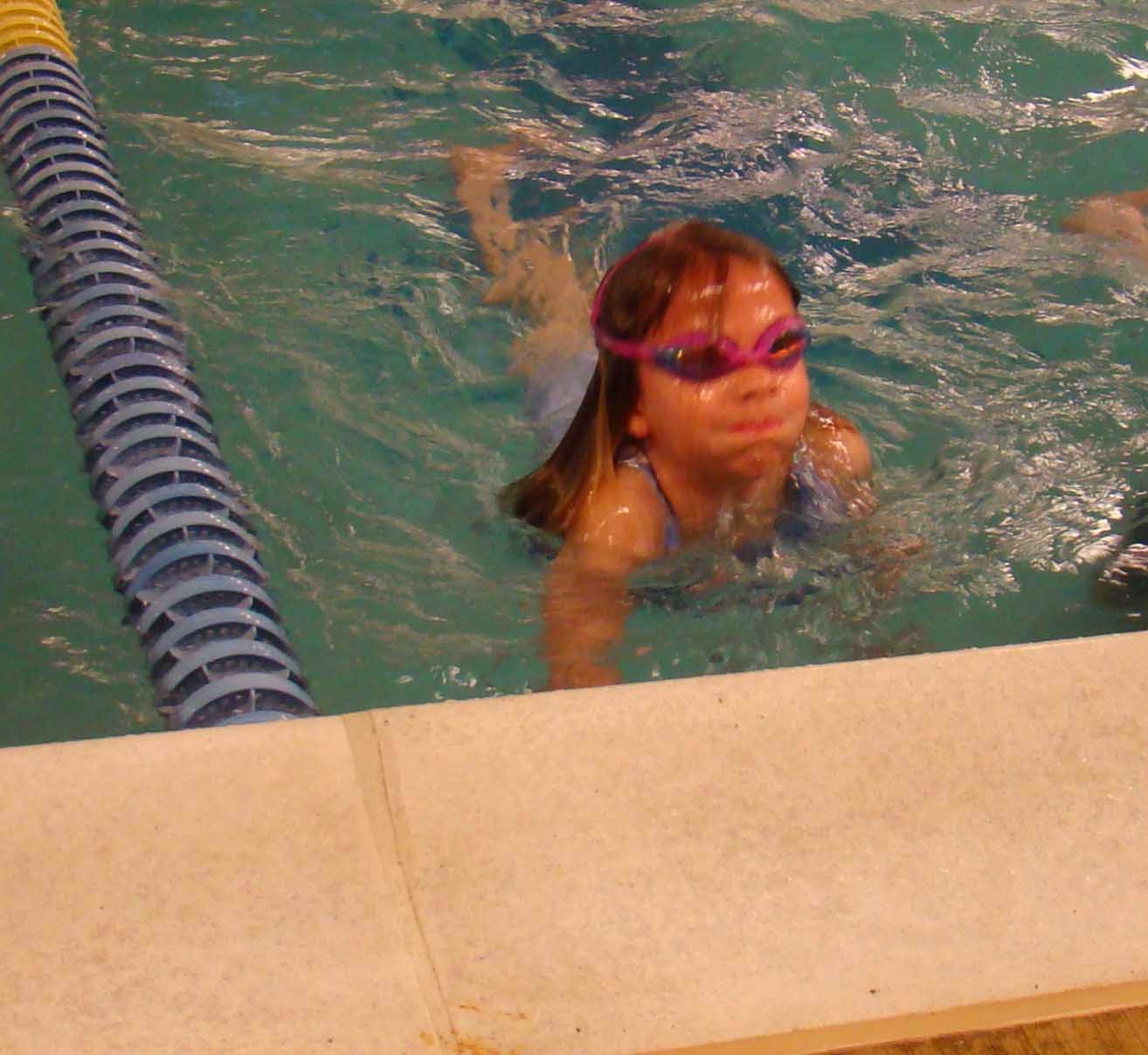 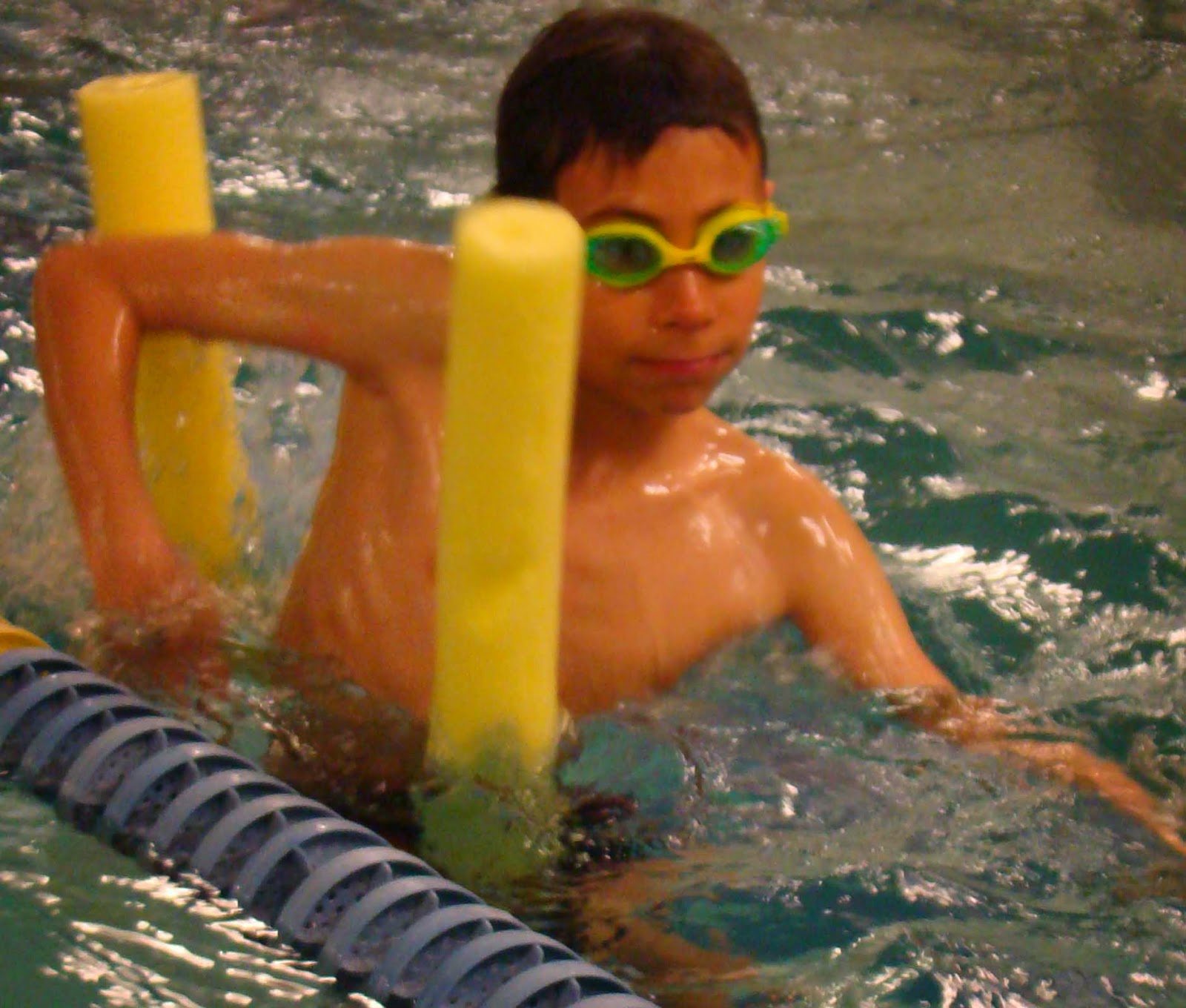 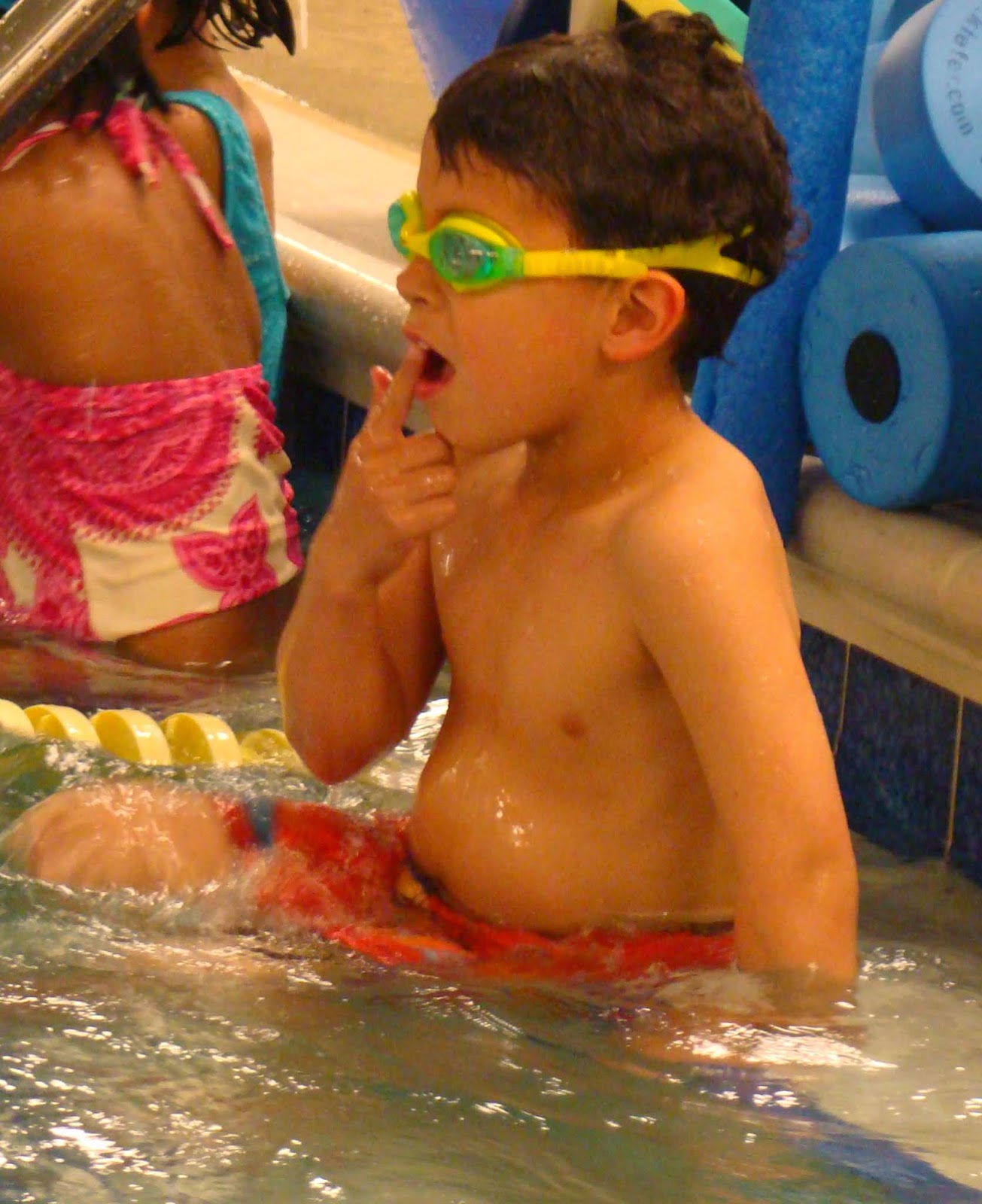 Monday evening we got to watch the kids' swimming lessons and noticed they've made lots of improvement since last summer.  Since the family lives near a lake, it's wonderful that the kids are becoming water safe.  The week went by all too fast, and now we are back home and our normal routine.  We have choir tonight, and this time during practice,I will try not to think of the time in Chicago.  Have a great evening, Everyone.  I hope to catch up with your blogs real soon.