The day after Christmas the first mail delivery in days brought a surprise gift from my blogging friend, Kathy. She felt bad that this beautiful pillow didn't arrive in time for Christmas, but actually the timing was exquisite. I awoke that day feeling terrible and spent most of the day in bed, and her wonderful surprise was a real pick-me-up! Thank you so much, Kathy. Your stitching is lovely, and your pillow is a real treasure! Some day I hope we can meet face-to-face. 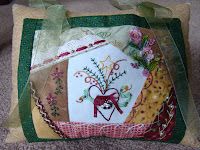 Today marked the end of the fastest week in 2008! As I am posting this, our Chicago family is headed back home, and we are reflecting on a wonderfully busy visit despite the snow that kept us pretty much housebound until today. David started off the morning stirring up a batch of Snowman Soup with recipe and ingredients provided by Pat Winter. I doubt she knew how happy she'd make one little guy who was a little grumpy when he got up. Thanks, Pat! 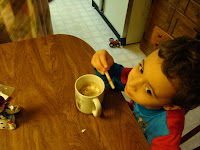 Yummylicious!
After we all got dressed, we left our driveway without a struggle for the first time in days and met our two older kids at a nearby restaurant for brunch because it was Auntie's birthday. Yesterday I baked a Cocoa Cola Cake, our traditional birthday feast, while Sophia napped. (I woke up around midnight on Friday feeling absolutely wretched and spent the whole day sleeping off some kind of bug. That plus the fact that we got another 8" of snow caused us to cancel the Open House scheduled for yesterday.) So while I baked, everyone else went to the Museum of Flight, the only outing since Tuesday, except for Christmas Eve when only Dick and I went to join the choir in singing at 3 services. The restaurant very kindly allowed us to serve the cake for dessert! (I did ask.) 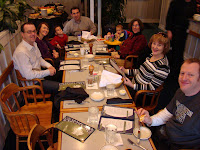 Happy Birthday, Auntie!
We've had a fun and hectic week that was made possible by the generosity of our two younger children who pooled their miles to bring their sister's family home. Isn't it fun when kids grow up and get along? We feel truly blessed to have spent this time together. 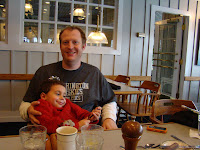 Fooling around with Uncle
Posted by Judy S. at 8:53 PM 7 comments:
Labels: family and friends, photos

Merry Christmas from our house to yours! This is probably the snowiest December in our area since 1990. We had snow again, starting on Saturday afternoon, that continued for much of yesterday. On Saturday morning we had a great choir rehearal with the orchestra, and everyone had a fine time putting the finishing touches on our altered program....rehearsal Thursday had been canceled due to snow. That evening we faced the challenge of two trips to the airport to pick up our Chicago family. Jill's flight was only a little bit late, but Michael and David's flight had many delays and arrived at about 3AM sans luggage. Thankfully our son did that pickup, and everyone was home safely, tucked in bed by 4:30AM. When we awoke, our backyard looked like this: 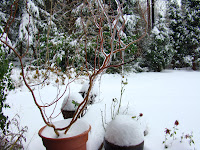 More Snow
The choir concert for Sunday morning was canceled before we went to bed, but Dick and Michael made two trips out, one to fetch Auntie Catherine in Seattle and the other to retrieve the suitcases. Both missions were accomplished, and we spent a great day together, warm and cozy in our snow-covered house. The arrival of the suitcases meant that I faced another challenge, fixing David's sweater. As you can see, Sophia's looks great. 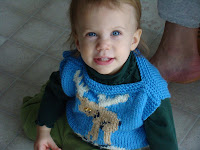 Miss Blue Eyes
Fortunately, I was able to open up the shoulder seaming without too much difficulty while David helped Opa with the train setup. Right now everyone is napping/resting while we await news whether tonight's choir rehearsal will actually happen. Christmas Blessings to All from this snowy corner of the map! 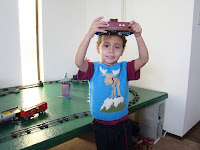 Snow here in Bellevue and Seattle pretty well shuts everything down. And so it was yesterday when we awoke to snow that continued well into the afternoon. For the first time since we joined choir in 1995, rehearsal was cancelled and rescheduled for tonight. (Luckily we had already changed our tickets for the 5th Avenue performance of 7 Brides for 7 Brothers!) My one day stint of jury duty was also cancelled! And I sure got a lot done with these gifted hours! More snow is predicted for Saturday night and Sunday, so who knows whether we'll actually get to sing our Advent concert. Today we absolutely HAVE to venture out to stock our cupboards for the arrival of Jill and family tomorrow. 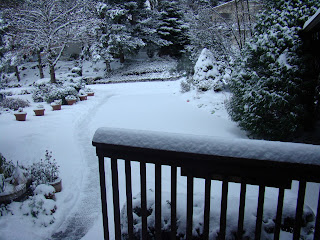 Front Yard
Look what the poor little critters have to contend with out back! 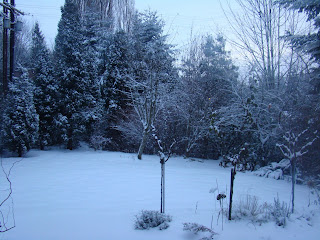 More Snow
It seems that every holiday includes a touch of sadness whether it's an illness or the unexpected passing of someone dear to us. Just this past Wednesday we had a phone call from Dick's cousin with the news that Auntie Del had passed away on Tuesday evening. We are so very thankful that we were able to visit her last fall and have fond memories of chatting, driving around, and eating together. Little did we realize that would be our last time together in this lifetime! She is the last of that generation of Shaws and will be terribly missed, but so fondly remembered. 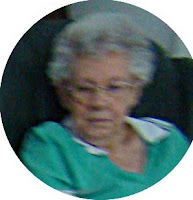 We'll miss you, Auntie Del
Choosing a Christmas tree this year took us all of five minutes as it was absolutely pouring rain. Our Scottish ancestry causes us to look for bargains, and this is what we found: not bad, I think. Every year I like to hang the little orange ornament which, up close, looks rather like an apricot. It has hung on every tree since my childhood and brings back many wonderful memories of long ago Christmases everytime I see it. 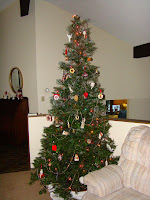 Can you even imagine being confined to the hospital at this time of year? That's the case for the Antepartum ladies in the ward where I teach knitting each week. Being there is a good thing for them because skilled care means the difference often of a healthy baby or one who has to spend fewer days in Intensive Care (NICU), but, oh, the hours and days pass slowly. With this in mind, I often search the Internet for interesting, and relatively easy, knitting projects. I found a wonderful source of all sorts of free craft patterns here. Among them I chose these: 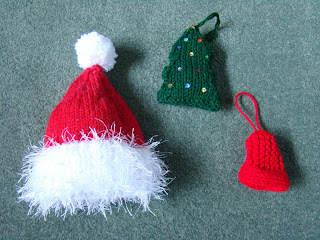 Holiday Projects
Interestingly enough, the ladies seemed to prefer this pattern by Danish knitter Vivian Hoxbro. Her website includes many beautiful and free patterns. This bear has an interesting history and is a fun puzzle to put together as it's knit in ONE piece except for the arms. I felt rather like a surgeon when I sewed the final seam! Try one, they are fun to do. 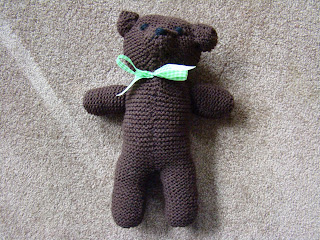 Question: If the plural of "goose" is "geese," why isn't the plural of "moose," "meese?" "Why?" is what I asked myself in the middle of this project, holiday vests for Sophia and David. I'd seen this cute moose on a sweater made by a choir friend. Well, this little devil fought me the whole way...twice! I did lots of frogging, finally finished both of them and sent them off. "Why?" is what I asked myself once again when I learned that David couldn't get his vest over his head! Maybe I should stick to Poof scarves? Or mittens? Or hats? 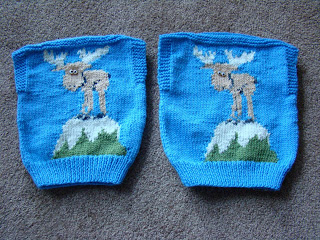 The Vests
Our son-in-law sent this photo of the vest recipients having fun together. They are coming here for Christmas and bringing the misbehaving moose for me to fix. I hope I can! 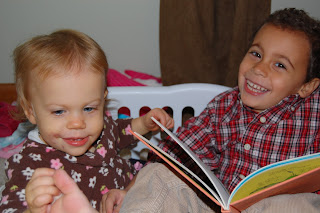 Tickle, tickle
Unlike the vests, this scarf is a fast, easy project. I am really beginning to like Cascade yarn as there are so many varieties, some fancy and some very practical. The scarves are made with a ball of Kiddo and 2 balls of Poof. You can see the many choices here, a much too convenient way to shop! 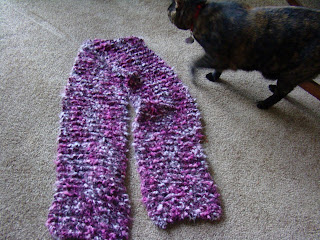