And just in the nick of time because a certain little someone is turning three soon. Opa is headed off to the post office as this is being typed.... 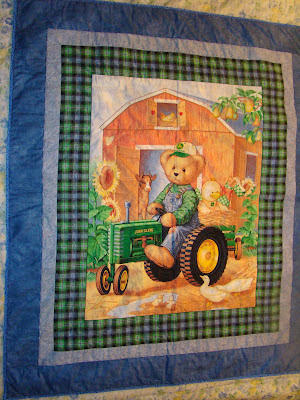 Daniel loves John Deere tractors, so this seemed perfect for him. I found some fun fleece for the back. Fleece is the "easy way out" on a quilt, but it works for me, particulary on kid quilts which you know are going to take a beating. 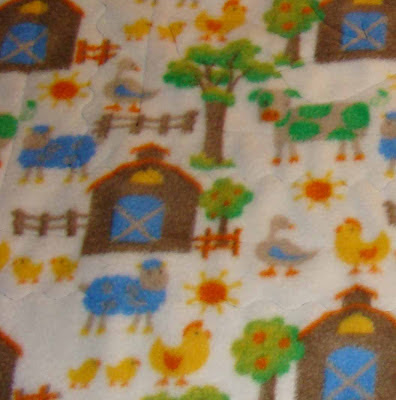 It seems like a LONG time since Mother's Day weekend because we've been so busy. The family gave me a very pretty bleeding heart plant; I love them but haven't been very successful with them. Hopefully this one will be happy like the light pink tree azalea nearby that Carl gave me ages ago
. 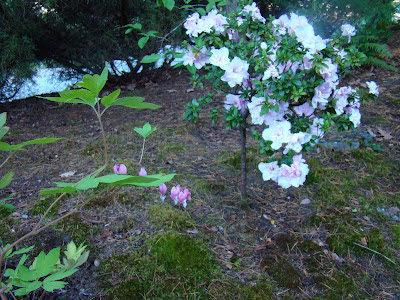 Recently the mail brought this OPAM (see the sidebar) surprise. Peg contacted me a few weeks ago about being the January winner. Who knew? Isn't that a pretty bookmark?  Now you know how behind I am on blog reading! 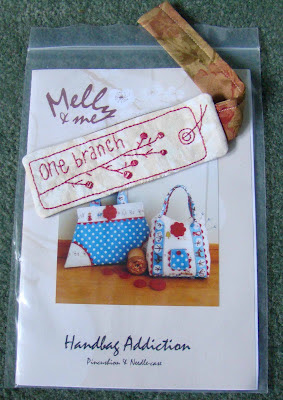 Before our weather returned to "normal" and things got crazy with choir rehearsals, we headed north, took the ferry from Mulkiteo to Whidbey Island, and crossed Deception Pass. It's called that because of its wicked currents. Currents, notwithstanding, it's a beautiful spot, especially on a sunny day. 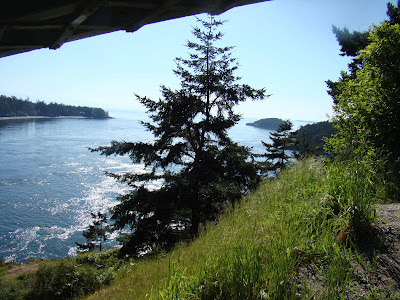 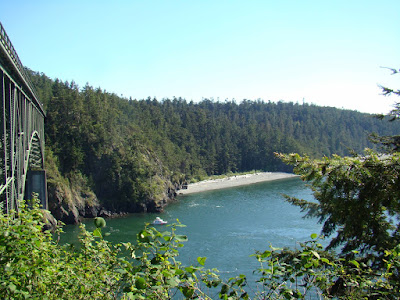 Navigating this channel must be made interesting by the rocky cliffs as well. 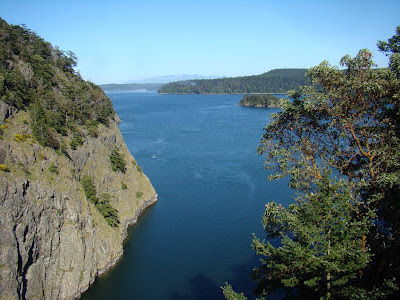 During the past weekend, which was mostly consumed by our choir "Worship through Music" services and a memorial service for a choir member, we did squeeze in a walk around Green Lake, one of our favorite walking spots. It wasn't sunny but hadn't started to rain yet either. 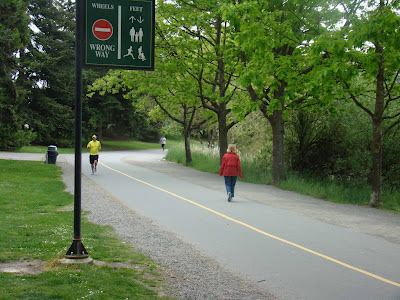 Mama Redwing Blackbird was trying to tell us something. Maybe she had a nest close by? Or maybe she was saying, "Get back to work?" 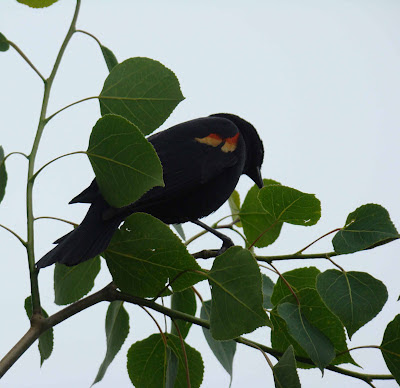 Last Friday, a beautifully sunny day, instead of going to see this little guy, 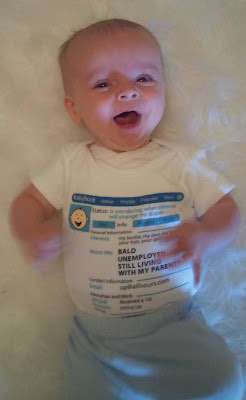 we hopped in the car and drove over Snoqualmie Pass and headed for a part of Washington we'd not yet explored. 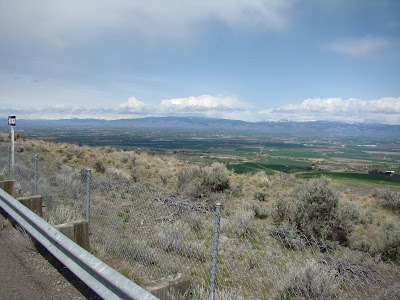 We stopped at a viewpoint on the road to Yakima. Isn't is amazing what a little water can do? 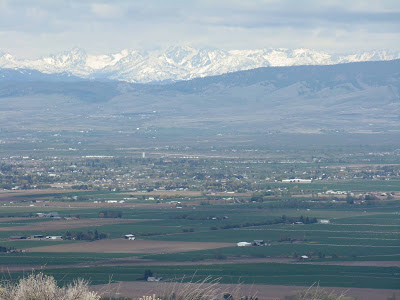 Our destination was Kennewick, one of the Tri-Cities, and we arrived in time to do a bit of looking around as well as checking out a yarn shop called Sheep's Clothing. (I was quite restrained.....only bought ONE ball of pink yarn as we'd just found out our niece is having a girl and a pair of cute RED dpns.) We also found a neat road through a park along the Columbia River.

Here we saw lots of Canadian geese, some of whom were wearing collars. Don't they look uncomfortable? 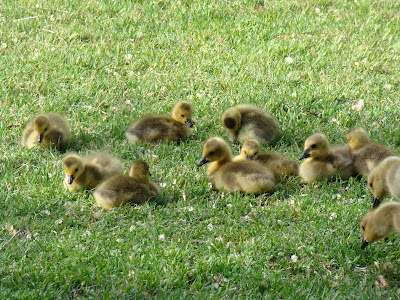 What we thought from a distance were little piles of debris turned out to be goslings, lots and lots of them. I stopped counting at 35! And we saw three more groups of geese and lots more babies further down the road. It would appear that this species is doing very well! Later that evening when we came back to the same spot, they were all GONE, hiding somewhere I suppose. 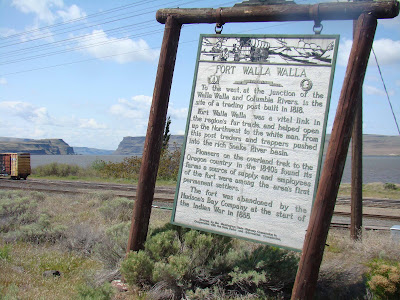 The next day we decided to follow the river instead of retracing our original route back home. That took us to this spot where the Snake River joins the Columbia and where there used to be a fort. 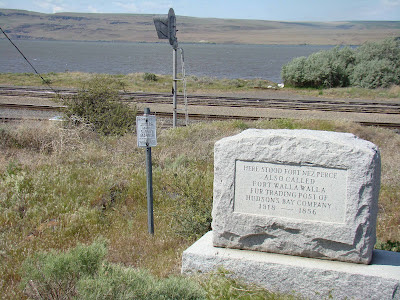 Here was another interesting monument and a good view of the Columbia River. 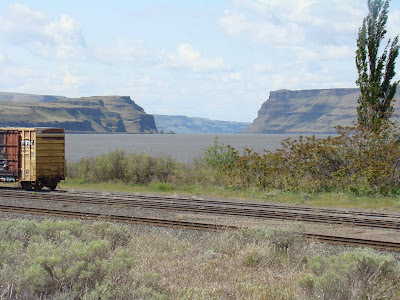 The highway and the railroad tracks curved and crossed the river, following the road along those huge cliffs at the left and  continuing on into Oregon where we  enjoyed some really pretty scenery in the Columbia Gorge. It was also interesting to see two very busy train lines, one on each side of the river. 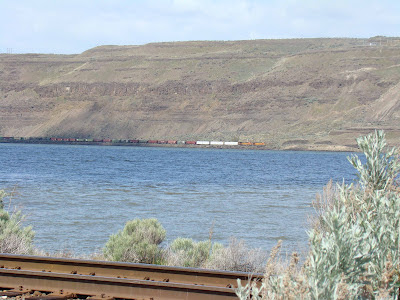 We could have crossed over the river to the Washington side on this bridge but decided to continue on through the Gorge to I-5 past Multnomah Falls. It was beautiful and busy, so we didn't get a photo unfortunately. 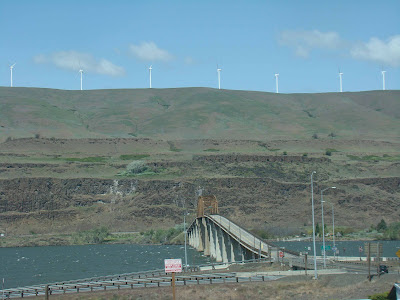 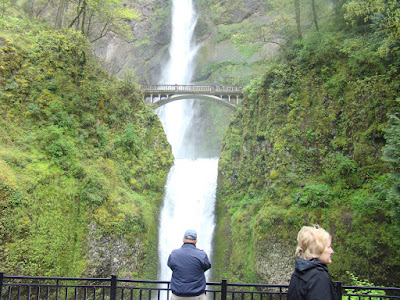 Had we stopped at the Falls, this is what we would have seen.  This photo was taken in May of 2010 after Catherine and Brent's wedding.  And as for Max, we saw him on Monday and will play with him again tomorrow!

In Search of Cranes and Sunshine

Becca of Patina Moon has some lovely photos of the greenery of Washington state that's quite in keeping with its nickname as the Evergreen State. Our state has another side, however, one that we recently explored. In the spring sandhill cranes stop in Eastern Washington enroute to their summer breeding grounds much further north. One recent sunny day, we headed over Snoqualmie Pass to see if we could find some of these big birds. This is what we found instead, something even larger! 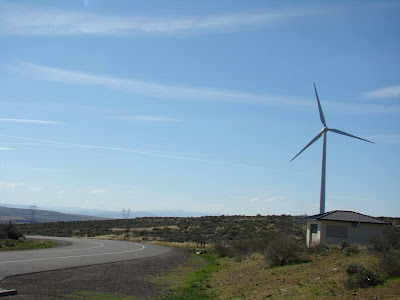 Lots and lots of wind turbines. Did you know those blades are 121 feet long and weigh just under 6 TONS? And this particular windfarm consists of 149 turbines, working hard to create energy. 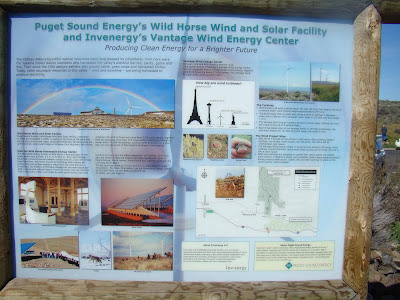 Perhaps you can enlarge this photo and read all about it yourself? Many people think that the weather in Washington state is mostly rainy; and yes, here in Western Washington we do have our share of cloudy days and sometimes lots of rain (7" in March here in Seattle!), but in the eastern part of the state where the apples, cherries and wheat grow, the farmers actually have to irrigate their fields, and the landscape looks like this. 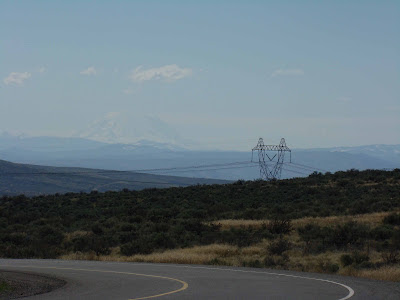 No matter where you are though, east or west, if you know where to look and the sun is out, you can see "The Mountain" (Mount Rainier~can you see it?) or  these mountains too. 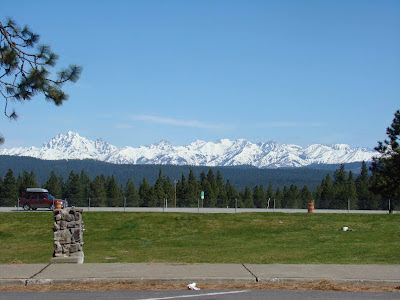 When we weren't busy chasing the sunshine, I've been working in the yard, knitting, and stitching on a new Sunbonnet Sue, my TAST project for May and of course, playing with Max. 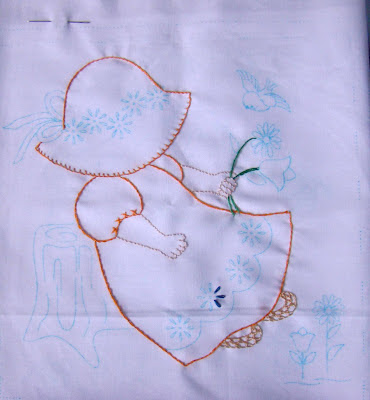