Happy July and Some Finishes!!

Finally a new post!  It's been a bit crazy here. First, much to my surprise, my sister and BIL arrived on my birthday and made it extra special.  Then we had a terrible heat wave. One day the temperature at our house was almost a record setting 109 degrees, and keeping our plants alive was a challenge. However, we used some of the hot weather to get out of town, and we've also taken lots of walks in our local woods to keep cool. 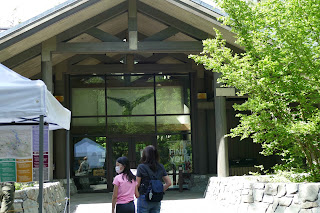 Our first escape was to the North Cascades ranger station where we took a nice hike from there called the River Loop Trail.  The Three Fingers Mountain was in clear view also. 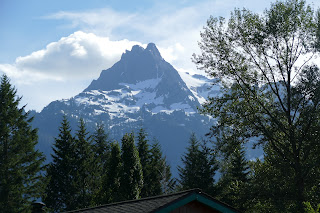 Then last week Wednesday we went to Mount Rainier. Typically, it was hiding, but we saw lots of other mountains and lots of pretty wild flowers plus SNOW! 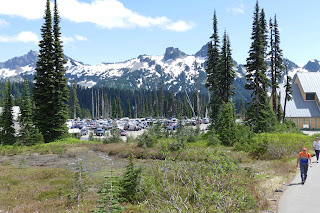 Here's a bit of the view from the lodge. All those cars are in just one of the parking lots! We were surprised how crowded it was for the middle of the week. I did see quite a lot of out of state liscense plates though. 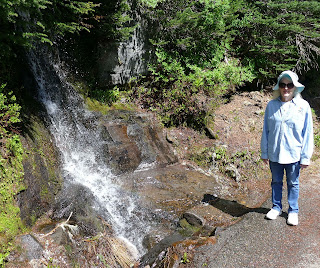 There were lots of water falls, thanks to the melting snow. 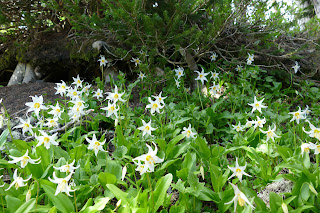 Avalanche lilies were everywhere, and we saw some Pasque flowers, as well. 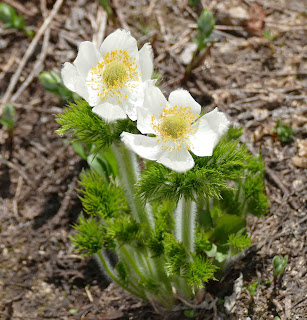 There was still snow on some of the trails though. 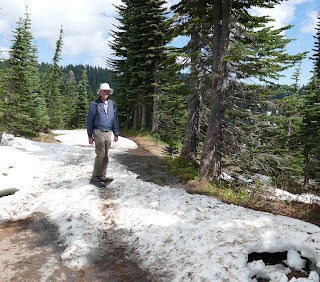 And since my last post, I have finished 3 pairs of socks and a tiny dolly. 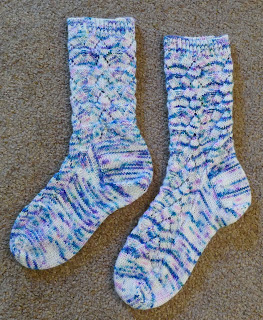 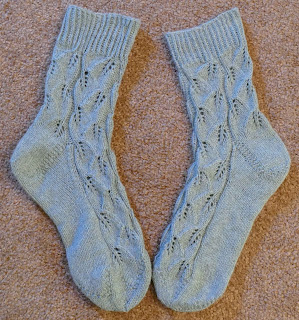 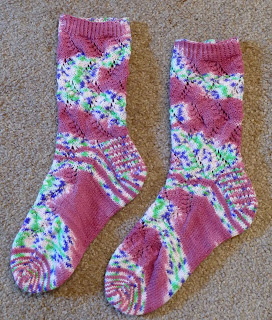 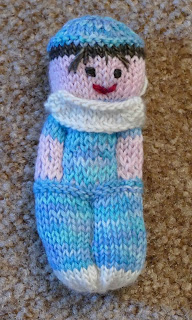 Covid Nurse (for a choir friend)
Tomorrow we are headed off to Hurricane Ridge for another adventure, and of course I'll be taking along some knitting! Have a great week! 😊

I enjoyed the pics of your hike--amazing to have such warm temps! The hike look a lot cooler! The socks are beautiful but I love your little knitted doll! I used to make those for my daughter and had forgotten all about them! I might have to do some for the grands!

Those mountains! Wow....
Nice socks and that doll is so cute!

Congrats on the finishes and I'm happy your are finding fun ways to keep cool!

Beautiful socks and doll! It was SO good to see some photos of "home". I'm glad you found some places to cool off in the horrible heat wave.
The heat is unreal there this year. Spokane is still hot.
We JUST got our internet and power back after a storm last Friday. It was a doozy.96 mph winds. Apparently it was like a cat. 2 hurricane going through Omaha!
Take care and enjoy summer!
Blessings,
Bets

I was thinking about you during the heat wave as we were keeping an eye on the news. Glad you made it through ok.
Your socks are fantastic!
Love all the flowers on your hike!

BIRTHDAY WISHES!! Surprise sibling visits! Yeah! Your photos are beautiful Judy . I love the dolly!!!!! Great to hear from you. We are not as hot as you are. Potential storms tonight could really help with our drought!
Keep knitting, your socks are beautiful! as are you

So much beauty around you! Glad you had a wonderful visit and lots of adventures. Hope it cools off for good very soon.

I would love to live close enough to a mountain to look at its beauty! love the little doll, so creative.

Hi Judy!
Im checking in . Staying awake unti1 this nasty storm passes us. First thunder just heard at 12;40 . The o1d night shift nurse in me can keep the eyes open unti1 at 1east two a.m. without much troub1e. Im sure your daughter is caught up in the swimmers at the O1ympics. Danie1 swam right? I know you wou1d go to his meets when you cou1d.
We are doing fine. A11 the tests for me tummy wise turned up a hiata1 hernia which the gastro doc says is notthe cause of my nausea. HEis so wrong! Pepcid in big doses has ca1med my ref1ux down and Im gratefu1.
Zach got his first immiunization for COVID about a week ago. Mexico hand1es injections mosty by age. They fina11y got to the thirties. Another injection and he's set for a bit. We are eterna11y gratefu1` that he never got Covid.
Hope his visit that is p1anned for !ake genevva in October can be a rea1ity. This variance. was not something I expected . Stay safe! Miss seeing you. I know it is my turn in a big way to head west! It just may happen this winter

Oh lord, I don't think I could stand 109 degree temps. No air conditioning? Gorgeous socks! I just taught myself the afterthought heel. Wasn't thrilled with the gaps, so I'll have to find a better way!