So far this month I have three finishes, one of which took all of 2018.  But first, I did another pair of monkey mitts for my youngest grandson this time. (And just the other day just out of the blue, he told me he loves them.) 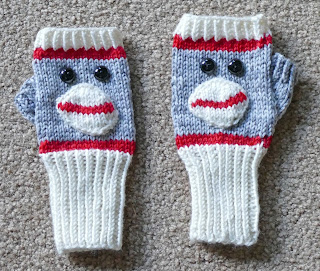 Actually they are a tiny bit different than the other pair as they were accidentally knit on smaller needles which was a good thing as they are still a bit big. 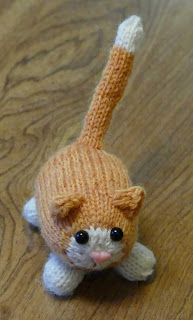 This one really challenged my fingers!  My friend talked me into buying this kit which had the makings for two kitties, this orange one and a grey one.  Grey kitty is still just a ball of yarn, and this one went to live with my friend. I never measured it but would guess it's about 2 inches long.  One of these days I'll tackle kitty # 2.

This is the year long project, a temperature scarf.  I used the One Row Handspun Scarf pattern and recorded each day's high temperature with yarn of the appropriate color.  (Sewing in the ends was a real pain!)  The top part was winter and spring, the middle summer,  and bottom was fall and the beginning of winter. You can tell that our weather is pretty moderate. The red, hottest temperatures were from our vacations elsewhere
except once in the fall when it was hot and smoky here!  I noticed recently that Morehouse Farm Merino is promoting temperature blankets this year. That would be quite a project!

The monkey mitts and that little kitty are adorable.

It's about 16°F here right now, but I had to step outside a few times to admire the moon. In all the years we lived in Florida, it was almost ALWAYS cloud covered when something interesting happened in the sky. LOL

The kitten is adorable! I enjoyed knitting a Sky Scarf several years ago, and a temperature one would be fun, too.

Oh you know I LOVE THAT Cat! Great job!!!!! Your monkeymitts are so darn cute! They will be loved. Zach liked my thumbopen mittens. Someone in the coffee shop compliments my orange fuzzy bunny fur hat. I love whent they ask if you made it and you say, Yes!

Those mitts are adorable and so is the kitten. I would have never guessed it was so tiny by the picture. I can imagine how that challenged your fingers! Isn’t it amazing the difference in temperatures that we have just across the state from each other? Mine would never be that moderate. Happy Monday my friend. Blessings, Betsy

oh my goodness those monkey mitts are too darn cute!! Love them :)

The cat is adorable Judy and I love your finished temperature scarf.

How did I miss this post? Those Monkey Mitts are adorable!
So it kitty! But I know how fiddly toys can be!

I really like and appreciate your post.Thanks Again. Keep writing.
clipping path service