It's Been Too Long!

Just this morning I received an email from Kathyb asking whether I was OK.  Well, yes, I am; July was an absolutely crazy busy month and the first part of August has been interesting also.  It'll take a while to catch up, but I sure will try. 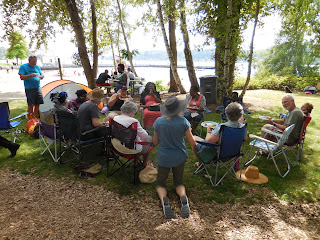 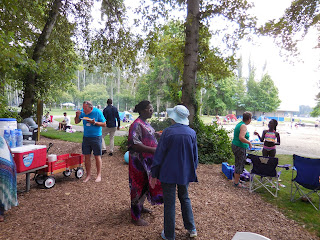 One Sunday early in the month we attended a picnic with members of the New Hope Revival church that meets at our church. The weather was perfect, and we all had fun. 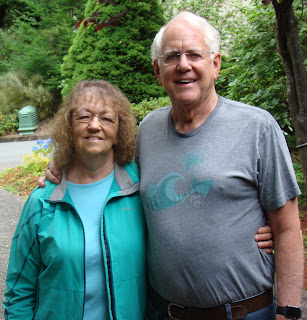 Not long afterwards we had a fun visit with Nancy and Bill Liggett.  Nancy and I taught in adjoining classrooms in California a long time ago, and we've been friends ever since. Her husband Bill has just published a book called Watermelon Snow which takes place on the Blue Glacier on Washington's Olympic Peninsula.  It's a fun read, and we helped him with a book talk at our local library. 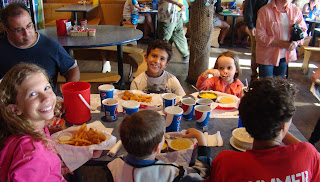 Then most of our family gathered at Cannon Beach, OR, for five days of fun, but I'll have to post more about that later. 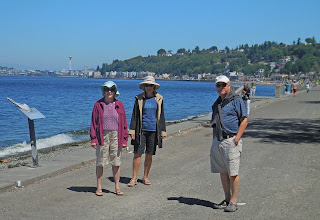 Right after we got home from Cannon Beach my sister and brother-in-law arrived.  They were traveling with another couple by train from San Francisco. Notice how blue the skies are! 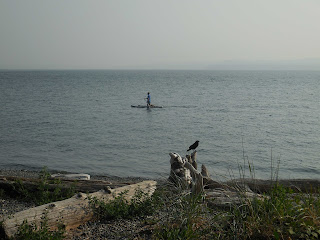 Here's how the skies looked soon after they left!  The temperatures soared and the wind shifted and the whole area experienced smoke from wildfires in British Columbia. Finally that cleared up on Saturday when the offshore wind returned and it finally rained a bit for the first time since June 17! 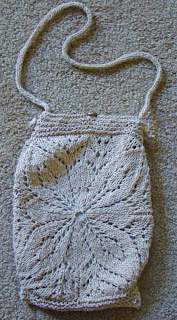 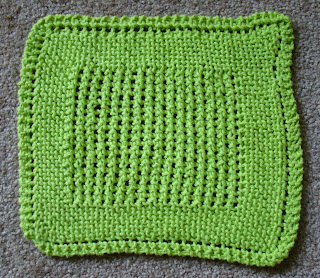 And I just now realized that I forgot to send my July finishes to Kris Meares.  The purse is a finally completed UFO, and the other is a dishcloth.  I can never keep the last corner from looking wonky; any ideas on how to prevent that?  (More photos later, I promise!)

Sounds like you've had a GREAT summer. Summer should be about meeting up with friends and having a good time.

They'll be plenty of time for blogging when the winter winds blow on in.

You have been busy! That wonky last corner thing has always bothered me too but after a few washings it seems to disappear.

It sounds like you have been very busy. We finally got a tiny bit of rain Sunday morning and the winds picked up here too. We had blue skies today for the firs time in almost a month! The smoke was gone! It was such a relief and cooler temperatures too. I love it like this. It's so good to see you back and how sweet of Kathy to check on you. But she is a sweetheart isn't she and such a caring person. I'll look forward to reading about more of your adventures. (And cold winter will be plenty of time to blog. Enjoy your family and friend when you can.)
Blessings,
Betsy

Good to hear from you again - summer is a time for family, fun, and travel. I'm glad you were able to include all three this year.

sounds like you have had a jammed pack summer of fun. I love to see all the people you know!! I'll be busy in the coming months with family visiting and I cannot wait.

Thank you JUDY for the post! Sounds like tons of fun was had. I would love thepurse pattern. WOuld consider beading it.

A perfect kind of summer!! So glad you've been having so much fun, Judy! We're always here when you get back. ;) Loved seeing all the photos and look forward to hearing about those 5 days with family! blessings ~ tanna

What a wonderful summer you're having. The memories should make the winter a pleasant time as you rehearse them. And soon it will be time to create new memories. These days go so fast.

I thought you had a lot going on last post! You really turned up the volume, but it looks full of fun times with good people in your life. A good summer indeed! Wishing you more fun all the way through the season. :)

Just how a summer should be!

So glad that you have been kept away by such fun activities.
If I'd been able to come to Seattle this summer, it would have been during the smokey heatwave!