On the Needles and Off (to a quilt show!)

Today was the first day of the Block Party Quilters quilt show, and I just got back in time to show you what I've been working on this week. (It's a great show, by the way, and I hope to post some photos soon.) 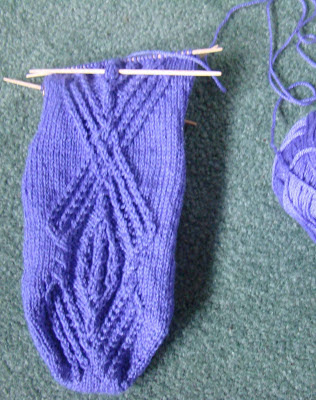 This is my very first, well second, toe-up sock. Actually this is the mate of the first one which was finished quite some time ago during a  KAL hosted by the Knitters Brewing Company. It might even get finished soon!  (In addition to being toe-up, which is challenging in itself, at least for me, it's also  one of those patterns where you can't talk to anyone while you are knitting.Instead,  you actually have to really concentrate or pay the price: FROGGING.) 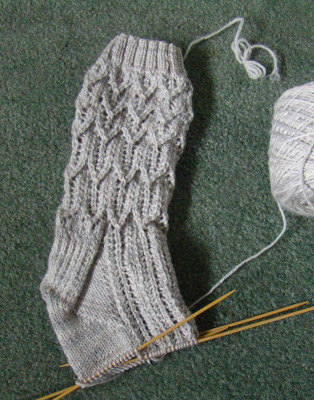 After more frogging, I'm finally headed to the toe of my first Weeping Angel sock. The pattern has a very interesting way of making the heel and gusset, and it took me a couple of tries to figure it out. Now that I understand the pattern, I'd better not put off finishing Sock # 2 in my usual fashion, lest I forget! 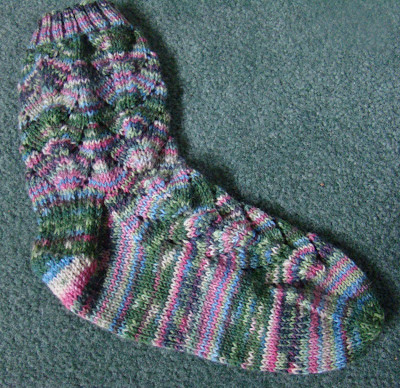 This is my first Opal finish using the Dragonfly pattern. I love the yarn and pattern. Sock 2 will soon be cast on, I promise! 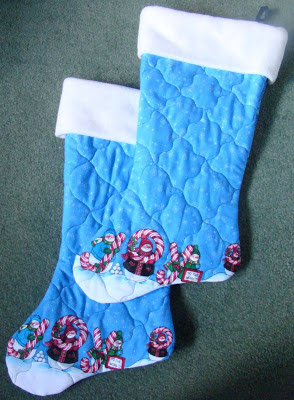 Meanwhile, during the rest of this week's spare time, I was working on a different kind of sock. Our quilt group makes Christmas stockings for the local Ronald McDonald house and these two are my small contribution. This is the third year we have done this project. 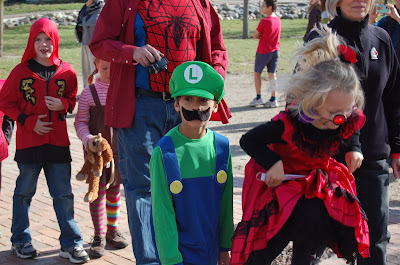 And,  here's David, dressed as Mario. I don't know what happened to the Lego costume, but this is what Jill sent me. That's some mustache, isn't it?
Posted by Judy S. at 3:10 PM
Labels: grandkids, knitting, quilting

You have been busy, BUSY! Love the stocking for the RMcD house. The fabric is adorable.

Great-looking socks. I've never knit a toe-up sock and would welcome any tips that you can give me.

You're incredible! I especially love the work on that gray sock. Gorgeous. I'm a winter knitter, so I think I don't advance very quickly. It will be several years until I attempt something like that. :-)

Glad you enjoyed the country school post. I'm so glad that building still stands, although it has taken a lot of abuse over the years, sadly.

That IS quite a mustache! You have been quite busy...love all the socks! Have a great weekend!!

Wow, look at all those pretty socks! The toe-up is a really nice pattern and I love the Weeping Angel. I want to knit that pattern sometime soon. Someday I'll have a pair of Dragonfly socks -- once mine come out of time-out. :-)

LOVE THE RONALD MCDONALD quilted stockings..such a wonderful thing to do!!

I love your angel socks and you are a busy woman!

Your knitting is amazing.....that pattern does look very involved. There will be some toasty warm feet when these socks are done.

Such pretty socks! I especially love the purple ones...pattern and color :)

Great looking socks!! I have attempted the toe-up sock...and I have one sock. I wasn't so excited to do the 2nd sock, and as a result, it has landed in the UFO bag. I'll never remember the adjustments I made to the first sock to make the toe less narrow. Ha. Oh well.

The weeping angel pattern looks so intricate and complicated. Beautiful!!

Judy, you projects always look great!! And, you know I love your little Mario!! Too cute!! blessings ~ tanna