So far this month we've had a bit of company and a bit of rain. In fact today's paper said we've had our usual amount of June rain already along with cooler than usual temperatures. The rain held off when our friends, Brian and Marci, were here from DC. Because she'd read The Hotel on the Corner of Bitter and Sweet, we went to the Panama Hotel for tea. Don't they look cold? 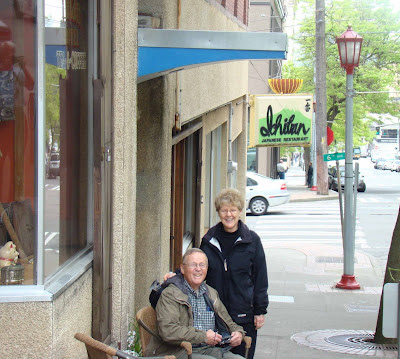 After lunch, we went to the Japanese Gardens in the Arboretum where the wisteria was in full bloom and the turtles were out. 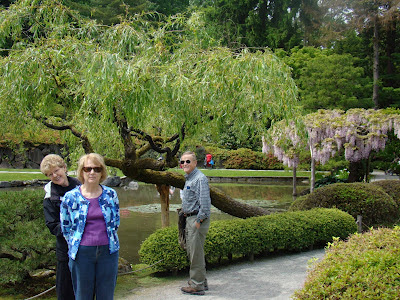 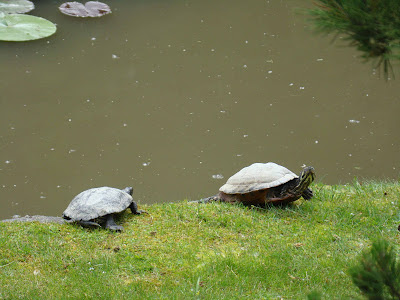 How many hours do you think it takes to make a garden look like this? 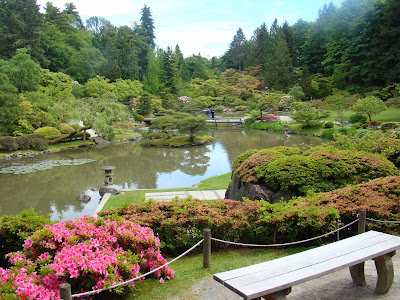 On Memorial Day we had another fun visit with friends from Germany: Udo, Sabine and their twins, who just turned four. We'd hoped to have a backyard picnic but it was too chilly to sit outside. Udo stayed with us for several weeks in 1997 when he was studying at the Fre Hutchinson Cancer Center. 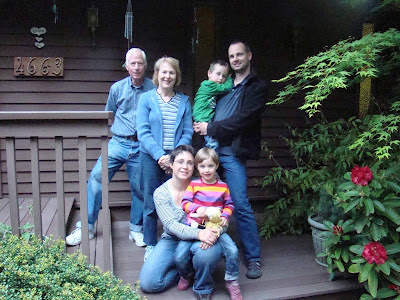 Despite all the gadding around, I've still had time to knit and sew since the gardening has been at a standstill. (The weeds haven't!) Judy L is encouraging people to post their knitting projects each Friday, so since there are lots of UFOs floating around here, I took a pair of socks out of "time out". This was one of my first attempts at working on 2 socks at the same time and was down to the foot on both when I realized the stitch pattern was wrong and put them away. Sock #1 is now back to where it was, and I frogged #2 down to the cuff this afternoon. It hurt, but now they're back on track. 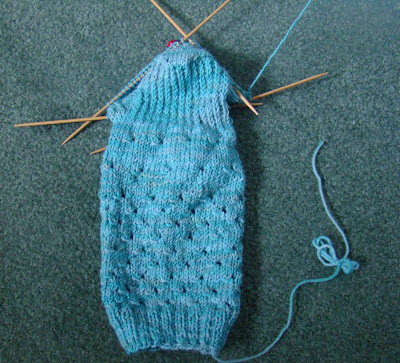 And yes, we've been visiting Max regularly. He's growing way too fast and is such a happy guy! 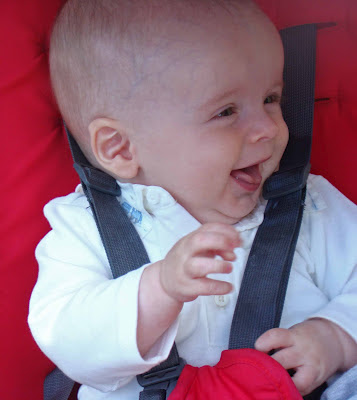 Who needs the sun?
Posted by Judy S. at 8:07 PM
Labels: exploring in and around Seattle, family and friends, knitting

Max looks like a real gentleman with the straps from his seat looking like suspenders. Those gardens you visited are so beautiful....that wisteria...pretty.

Brrr... looks chilly and sounds so FUN!! That Max is just a living doll!! blessings ~ tanna

The gardens look lovely. Wisteria is one of my favorite flowers. Sadly, it doesn't bloom very long and the plant(tree) really isn't very pretty without flowers.

What lovely sites to share with your visitors! That garden is so beautiful, as is Max! It's been cooler here as well. Not jacket cool, but not the usual blazing heat of June. Take advantage and stitch away!

I LOVE your socks ...great pattern you found.

The baby is adorable.

I am so sorry its been cold I do not like a cold damp summer at all. IT is hot here and Im thrilled. Bring it on. We are very dry, but I can water my flowers alright....

I could send you some of our heat. It's 109 here today!
Love the sock pattern. And Max is so cute!!

It seems that the weather is all over the place
wherever you go. We've had cool temps for
a few weeks but today is hot and muggy. I
for one prefer the cooler temperatures.
Especially when working outside in the
garden.

Oh, those Japanese Gardens are beautiful!!
Wish mine looked like that! LOL!! I'd love
an opportunity to walk through those
gardens taking pictures and absorbing the
view. And those turtles are so funny.

Love the colour of the sock that you've
resumed knitting on. Very pretty pattern
to it as well. Hope they cooperate for
you this time and knit up without any
further issues.

I'll have to send some warmth your way. We're sweltering today and tomorrow promises even higher temperatures!
I love the pictures of the gardens! What a beautiful spot to share with your friends.
Little Max is such a cutie pie!!

Max is such a cutie! Love the garden pictures. We had to trim our wisteria this year because it was pulling down the trellis.

We have had a nice cooler summer thus far.... and I know some people are burning up!
Your pics are lovely - the gardens - WOW.
Max is so adorable, happy babies are the BEST!