Seeing friends and family was just part of our recent trip to the Southwest. Another highlight was spending a whole day exploring just a tiny bit of the Grand Canyon. After we left Durango, we headed to Flagstaff, AZ, our jumping off place. Enroute, we passed Shiprock, one of the great landmarks of our desert country. We tried to imagine the pioneers seeing it without today's roads and telephone wires.

Upon the advice of Nancy's friend, Bill, we took the less traveled East Entrance and were glad he suggested it. Our first stop was Desert View where there is this amazing Watchtower that was built in the 1930's. 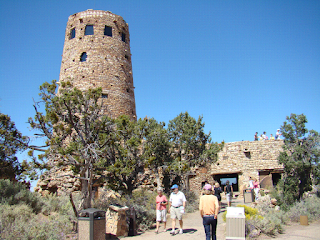 Looking carefully at other stops along the way, we could still see the tower. 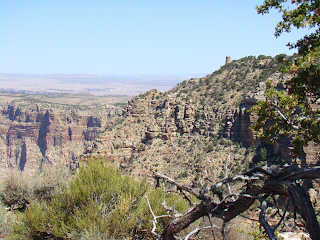 Same tower, a few miles away

We stopped frequently to enjoy the view until we reached Mather Point where we decided to walk a ways along the Rim Trail. 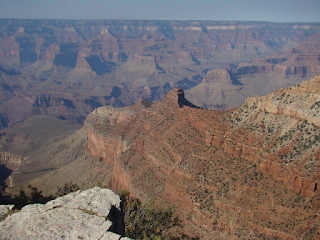 We had to look carefully to see the Colorado River which is about ten miles below. From above it's hard to believe that this river, which starts in the Rocky Mountains and flows all the way to the Gulf of California, carved this magnificent canyon.

A bend in the Colorado River

On our heavily traveled trail, we didn't see too many four-legged animals. We did see a gentleman feeding this rock squirrel despite many warnings that medics often treat 30 squirrel bites a day. I guess they have pretty sharp teeth and don't hesitate to use them!

We saw a number of folks risking life and limb by walking out on the edge of rocks with no railings, all for the sake of a picture or two. And then there was the guy tossing rocks over the edge, unmindful of people who may have been hiking below. (I don't mean to be critical but do have a hard time understanding such folly. Guess it's my age showing....)

Can you see the "brave" person?

Once in a while I can catch Dick on "film". And yes, he was in front of the wall!

Apparently the raven is the most common bird of the Grand Canyon. He's much larger than the crows that frequent our backyard. 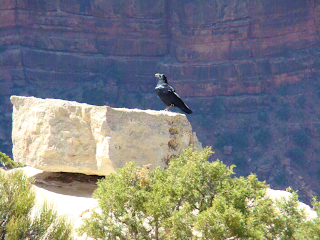 We have several friends who've hiked down into the canyon so were quite excited to see the trail far below as well as the suspension bridge across the river. That sounds like a really tough hike as the way back out is all uphill! Ten miles UP! 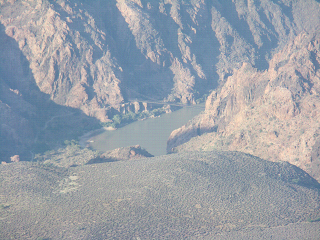 A kind woman saw us struggling to take a timed photo of the two of us and offered to help. We were able to return the favor to another much younger couple on down the trail. We only walked as far as the Yavapai Observation station where Dick took the bridge picture, and we realized that was as far as our day's trek would take us.

While we barely scratched the surface of this beautiful place, it was a fun way to end our trip. From Flagstaff we headed back to Phoenix, had a great visit with our long ago neighbors, the Lamms, and flew back to the blessedly cool weather of the Northwest.
Posted by Judy S. at 5:42 PM
Labels: travel

Dear Judy
Welcome back.
You made a wonderful journey.
I enjoyed your beautiful photos very much!
Thanks for it ♥ our world is so beautiful…!
I hope that you well are, and send you best greetings
♥☼♥Barbara♥☼♥

You made the Colorado look so tiny!!!!! It really IS a long way down.

Glad you had such a nice trip!

Fantastic pictures - definitely on my places to go one day list.

What a wonderful trip you have had. Me I am still sanding and staining logs. I took a day off to go to the Duvall quilt festival. I posted the pics today. Our time is running out and we may have to finish in the Spring. ;-( . Sharon

Lovely photos of your trip. Glad you were able to enjoy some of the beauty of Arizona.

Beautiful pictures! Must watch the current PBS series: "The National Parks: America's Best Idea" esp. the section on the Grand Canyon to get the history on how it was almost lost to development...

It's been fun reading through
your blog, catching up on your
news, seeing what you've been
knitting and delighting in your
grandkiddies who are all adorable.

Your trip through the Southwest
looks like it was both fun and
a great opportunity to see some
beautiful country. The photos
of the Grand Canyon are just
amazing. I'm not fond of heights
so I sure wouldn't be one of
those people who gets close to
the edge or ventures beyond the
safety barriers. And the guy
tossing stones over the side
should be made to pick them all
up and put them back!!

Thanks for the great travelogue. It's nice to see photos of you and your hubby.

I love the southwest, but isn't it nice not to live in that heat?

I'm sorry but that floppy hat pic is just the CUTEST!!! And, I always enjoy seeing the pics of your travels. You have a great eye for nature and tell a good story with your photos. I really liked seeing the Raven...and the "Can you find this?" suspension bridge, colorado river, brave man...etc.

One of my favorite pics of yours was the turkey fungus from a while ago...it really looked like a turkey tail so I save it...

Judy,thank you for showing us this great fotos of a wonderful trip! For me it's always a good possibility to see the world!!
Oh,I must smile,when I read about the brave person! I know that!!! ;-)))
From this journey certainly you have many memories in your heart!?
Greetings from Germany,Ulla

I once taught English on the Navajo Reservation in Monument Valley, so i know how lovely it is.
Glad that you had a great trip!
Micki

Welcome home Judy, great travelogue! I do love the Grand Canyon. I went rafting down the Colorado once, it was breathtaking at every turn. I didn't know about the watchtower.

Welcome home and I'm glad you are feeling better!
I enjoyed catching up and scrolling thru your last couple posts of wonderful pictures. I haven't seen Shiprock for years! All your pics are terrific!
I also love the multi-color scarf a couple posts back.
Glad you had a great trip and are home safe.

Thanks for taking me along on your wonderful journey! I know you're happy to be home!