Yesterday afternoon, after reading in our paper about the snow geese at Fir Island, near Mount Vernon, we headed north to find them. It's lovely country with great views of the mountains and depending on the season, the flowers. The tulips aren't out yet, but the geese surely were. 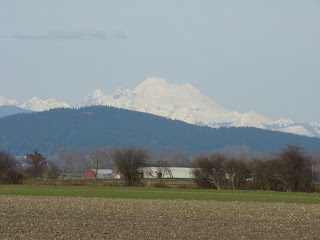 Mount Baker After driving to the spot where the newspaper photo was taken and of course, finding nothing, we started wandering the country roads. At one point, I thought I saw some white spots in the distant fields, so we got serious in trying to figure out how to get closer. We took the first road in that direction and then turned onto what was labeld, dead end. Bingo! We first saw them off in the distance, and then they began moving slowly closer. Do they do this for all bird watchers? 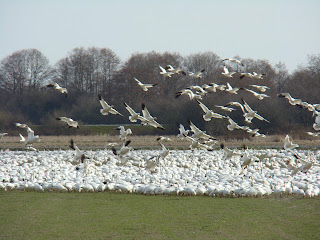 In Flight They kept coming closer and closer until Dick could get some good shots without his telephoto. The snow geese winter here in Washington, and the paper said they are about to leave for their summer dwelling place in the far north. 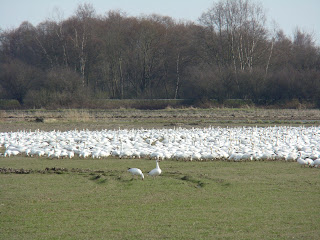 Getting Closer Notice the black feathers under their wings. Our bird book says they sometimes have rusty-colored heads. Might that be from playing in the mud and drinking muddy water? 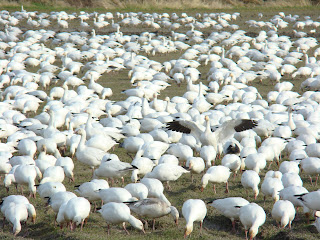 Move over! I've never seen so many birds at once. The honking noise was incredible. And they just kept moving closer to where we were. 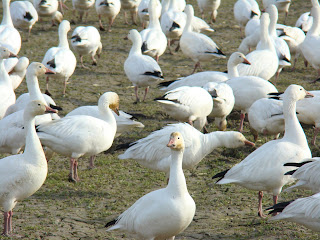 Aren't I cute? Dick took lots of movies, and hopefully this one will give you a good idea of the noise. What we thought at first was wind, is the sound of their wings as they took off. Why did they all leave? I have no idea. Maybe they were full?

Well, that was just incredibly cool!!! Thanks so much for sharing.

I thought maybe, at first, you didn't find any but wow, so many! It is mind~boggling :)

Wow! That is awesome.

wow. the geese are incredible. you know that first photo looks like one of mt embroidered landscapes with the ploughed field in front and mountains in the background. i got a jolt when i saw it

Wow, that is a beautiful site. I wish I could see that in person.

Judy, I tried to respond to your comment on my blog, but I couldn't get to your email address. But, I want to say thank you for the nice compliment on my quilt and shawl. I see that you quilt also. I can't wait to see more of your projects.

It's still Sunday here, getting on
into later in the afternoon and
almost time to start thinking about
dinner. I'm taking a few minutes to
blog a bit before getting on with
that.

Thanks for dropping by my blog and
leaving a comment. Regarding the
Prairie Schooler chart Prairie
Birds, it is chart #24 and I
believe it is now out of print.
But if you dabble in Ebay at all
then just keep an eye out for it
there. That's where I got mine.

I really enjoy all the bird
watching reports and adventures
that you feature on your blog.
It's a hobby of ours here as
well. We keep our feeders well
stocked, especially during the
winter, and there's even a small
heater in the birdbath in the
winter to allow our birds fresh
water.

I loved seeing the White Geese.
What a humongous herd of them!!
The only geese that we see around
here in great numbers are the
Canada Geese. They are settling
in for nesting season right now
and since they're not the sharpest
birds on the planet they tend to
nest in very inappropriate places.
Right next to busy roadways, which
they have to take the goslings
across every day, just because...
right next to railway tracks...
it's ludicrous really. And they
return to the same nest every year,
no matter how dangerous the area.

I drooled all through your post
about making an apple pie. I
must try your recipe sometime,
though right now I'm on Weight
Watchers and shouldn't even be
thinking about such things. But
it looks soooo good!! SIGH!!!

The picture of the daffodils
with snow sprinkled around them
like icing sugar is so pretty.
We might be seeing some snow
tomorrow, mixed in with rain.
We can get snow here right up
until the end of April, though
we like to pretend otherwise.

I love your bunnies. They are
so sweet. We see some here on
occasion and I take them out
carrots as often as I can.

My Phoebe is very fond of the
heat registers too, and she
knows how to open them up when
we have them half closed. We
like the bedroom kept cool for
sleeping, she likes to keep her
belly fur warm. I don't let
the cats near the computer
cords because they like to play
with them, and Phoebe can be a
chewer.

Oh dear, this has turned into
another of my epic posts. Sorry
about that. Have a great week!
Hope the snow stops dropping in
on you.

What an amazing sight you both saw. The number of birds all together is something not experienced all that much. We did have a flock of about 50 finches last weekend come by our bird feeder. we were able to identify 3 different varieties. Today, I saw a female cardinal and two days ago, spotted my first robin of the year. Jane

Wow! Very cool video. That is one whole lotta gaggle. I don't know why the herd mentality applies to birds. It's puzzling how they all decide to fly off in one direction at the exact same instant.

JoAnn ( Scene Through My Eyes) said...

Love the movie with sound. We've been down to see the Snow Geese and the Tundra Swans many times. We went this year during the Snow Goose Festival on March 4 - and got to take a bus to see the geese. That was nice for Don so he could enjoy the scenery without driving.

We're waiting to find out when the best time to see the tulips and daffodils and we'll be back down there again. Thanks for the great pictures.

Wow! They are cute : ) What an interesting experience ... thx for sharing!

Wow, don't you love Geese. Every year I make sure I go to Grey Lodge to watch the Geese. There is just something magical about them. since I live in the Pacific Flyway I get to see a lot of them and love it when I hear them flying over.

Wow, sound like a goose stampede!
That's amazing, thanks for sharing it!

This is just amazing!!! I wonder what they are all saying to each other. lol Geese are so awesome to watch and yet you got an amazing show. I have never seen so many in one place.
Big Hugs,
Wendy