While we were gone, I received this beautful block from a swap on the Crazy Quilting for Newbies site. Doesn't Janet do fabulous work? When I saw this block on her blog, I never dreamed it would one day be mine. Janet later wrote me, saying that one of the blocks she received was from me. 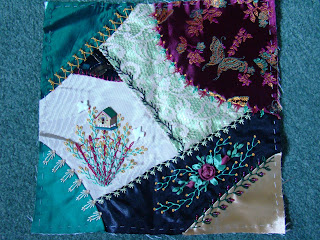 Hi Judy, Lucky you.. Janet does great work and it must have been fun looking at all she put into it. Hope you're settling back into things hafter your whirlwind summer. Happy October!

Oh, I loved that block when I saw it on her blog. The bird house is just darling! Lucky you!

I clicked on it for a closer look and the detail is stunning. Love the colours too - and the birdhouse!
Linda xx

I have a little birdhouse button like this and the way this one is used is so charming, I just might have to steal the idea!!

Judy, just found your site thru Pat Winters' blog. As you sent her a parcel of sweet things.
I love the block you received it is lovelly.
I enjoyed looking at your travel pics, I remember visiting the Maine area in 96 and they bring back fond memories of the changing seasons colour.
Regards,
Larna

How luck you are! The block is stunning. The stitching at the birdhouse is so creative. But, that's Janet for you!

Hi Judy,
I was surfing Pat Winter's blog and found you..
What a beautiful crazy patch block!!! this is a beginner????? WOW!
I am just learning this ...LOL
I really enjoyed your pictures of autumn splendour... Isn't this a lovely time of year... Well at least it was.... we have seen a bit of the white stuff YUCK!! So glad it has changed to rain...
Anyway... I love your knitted things too.... Lovely blog... I shall return....
xoxo
((((hugs))))
maggie