Off to Germany~Cologne and Aachen

After four lovely days in Brussels, we packed up our stuff and activated our German rail twin passes. We love traveling on the train, watching the scenery and chatting with the people, or at least trying to in our not-so-great deutsch. On one part of our trip we sat right behind the engineer! 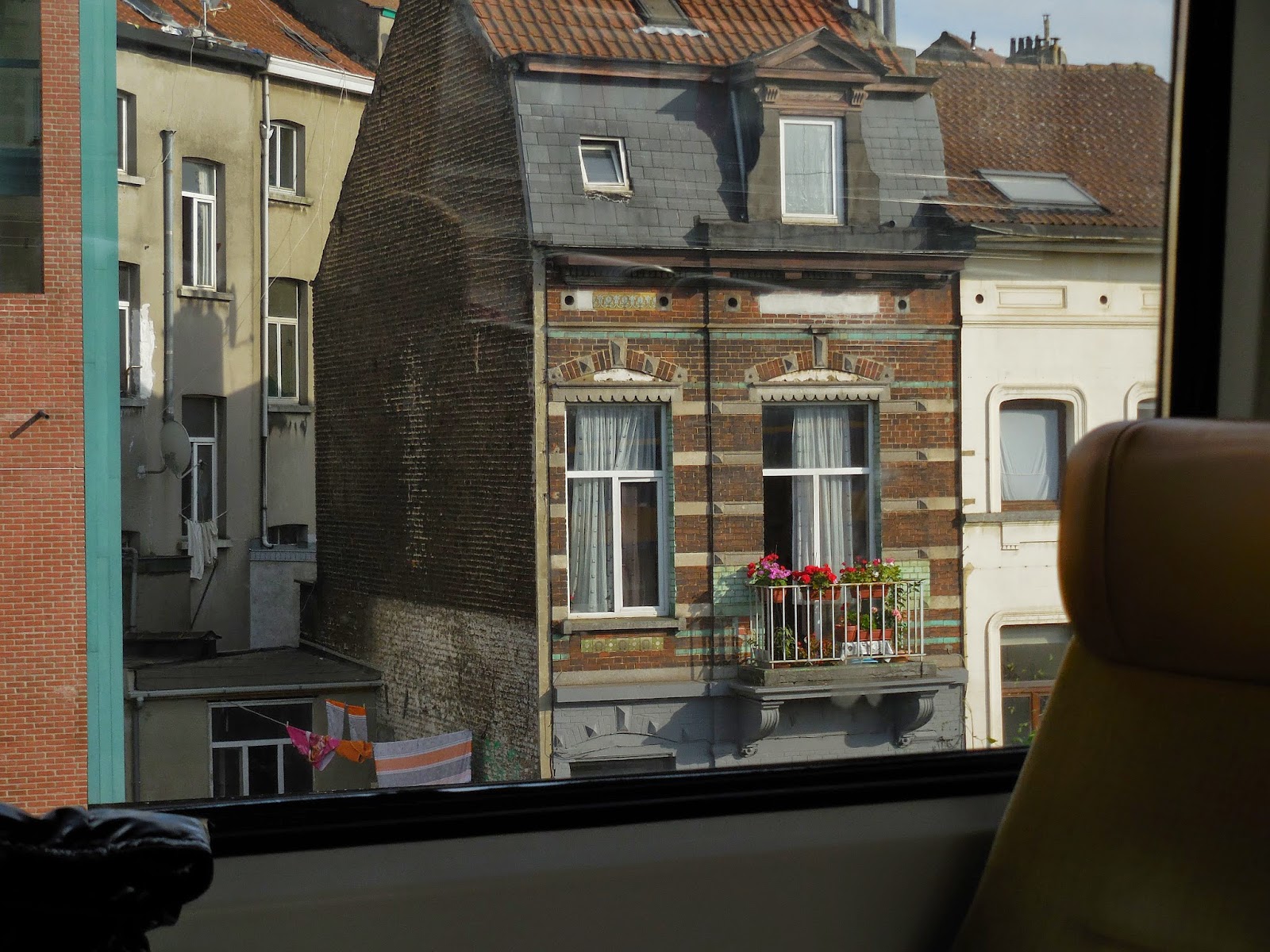 We couldn't talk to him, but we could watch the speed.  That was interesting! It was tough to get good photos from the windows though. 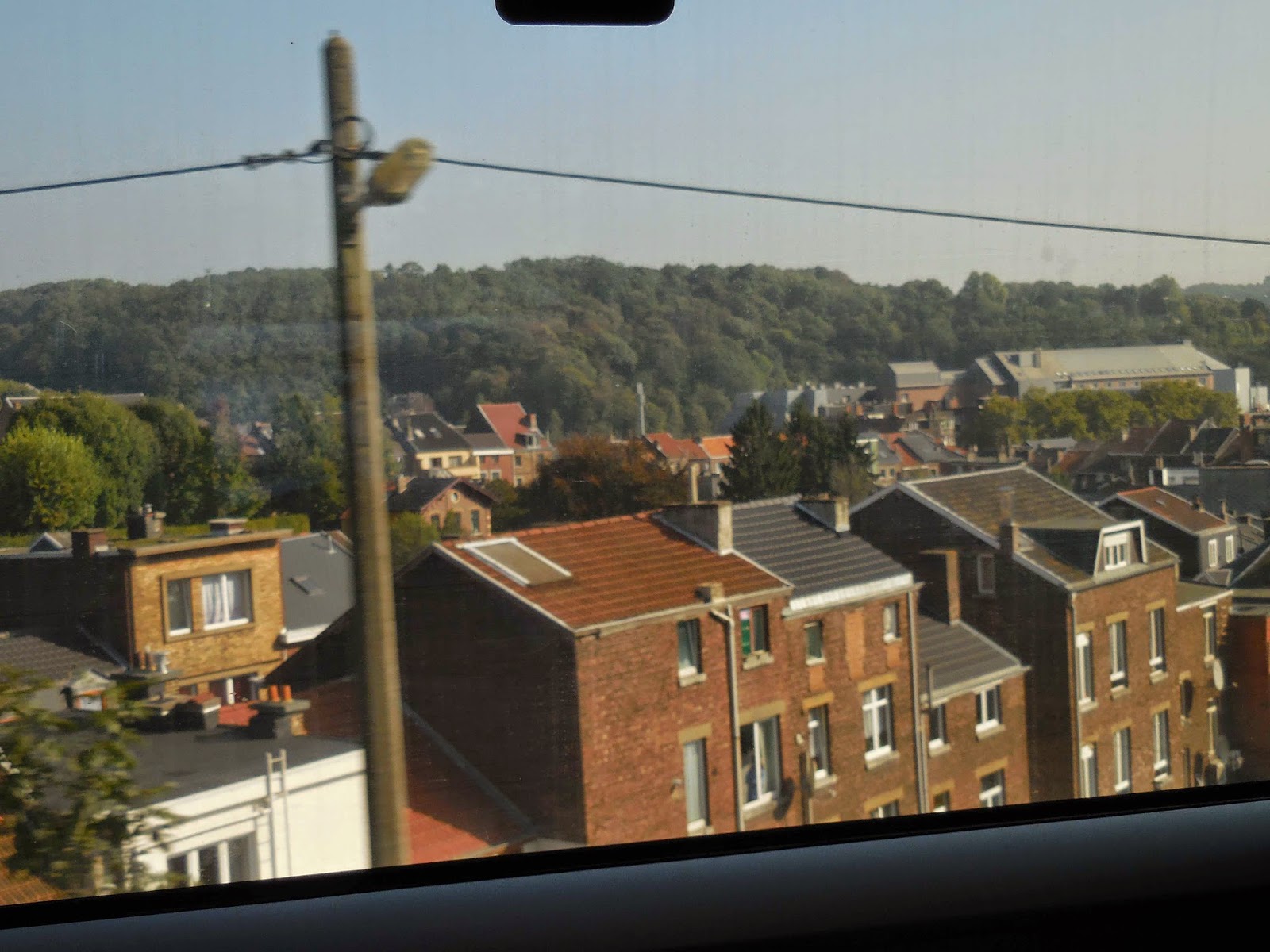 We arrived at mid-day in Cologne, Germany, where our younger daughter spent a quarter studying in 1992.  Her host mother then has become a good friend and she met us at der Dom exit from the train station. 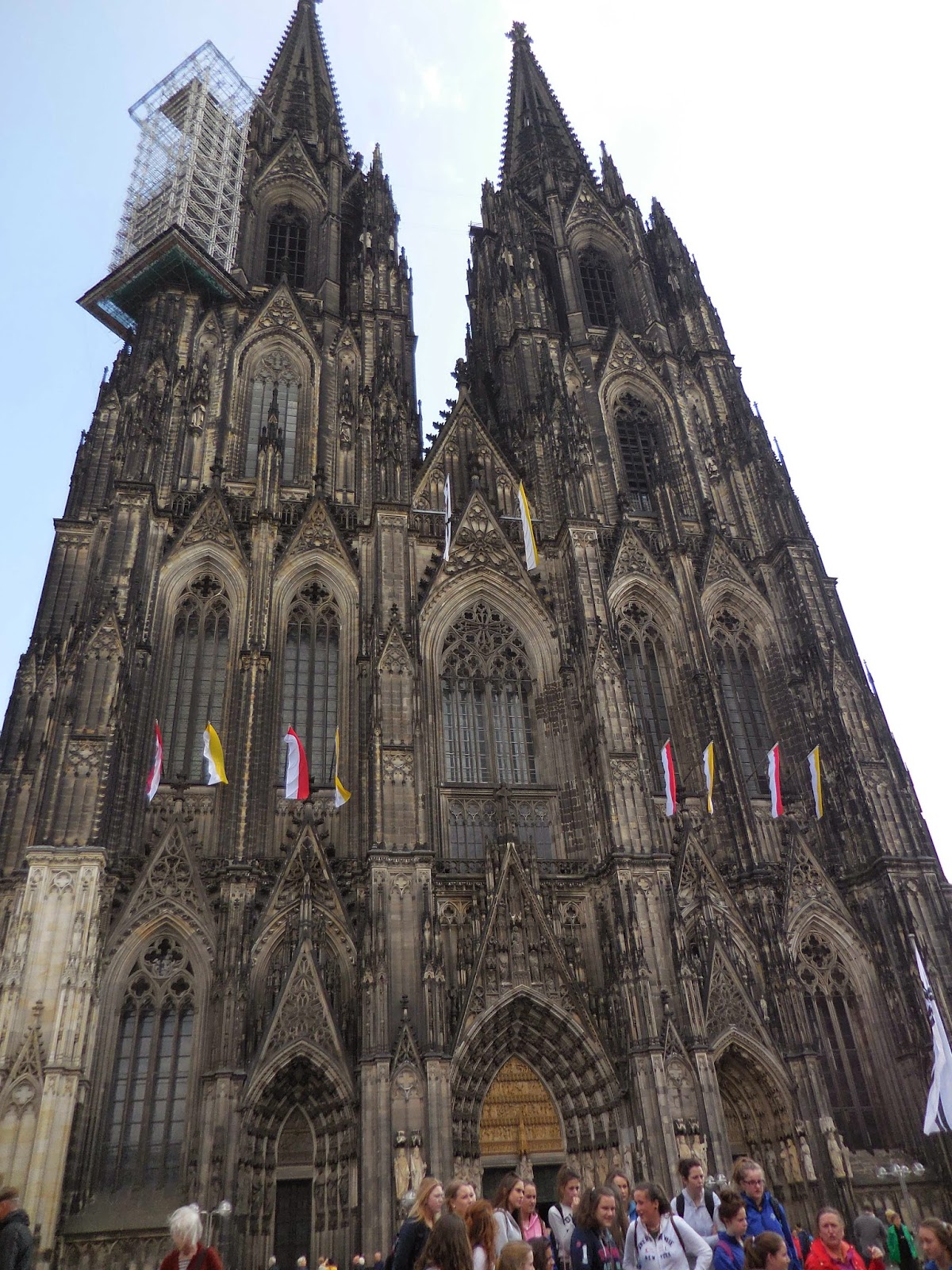 It's so hard to photograph because it's so huge! 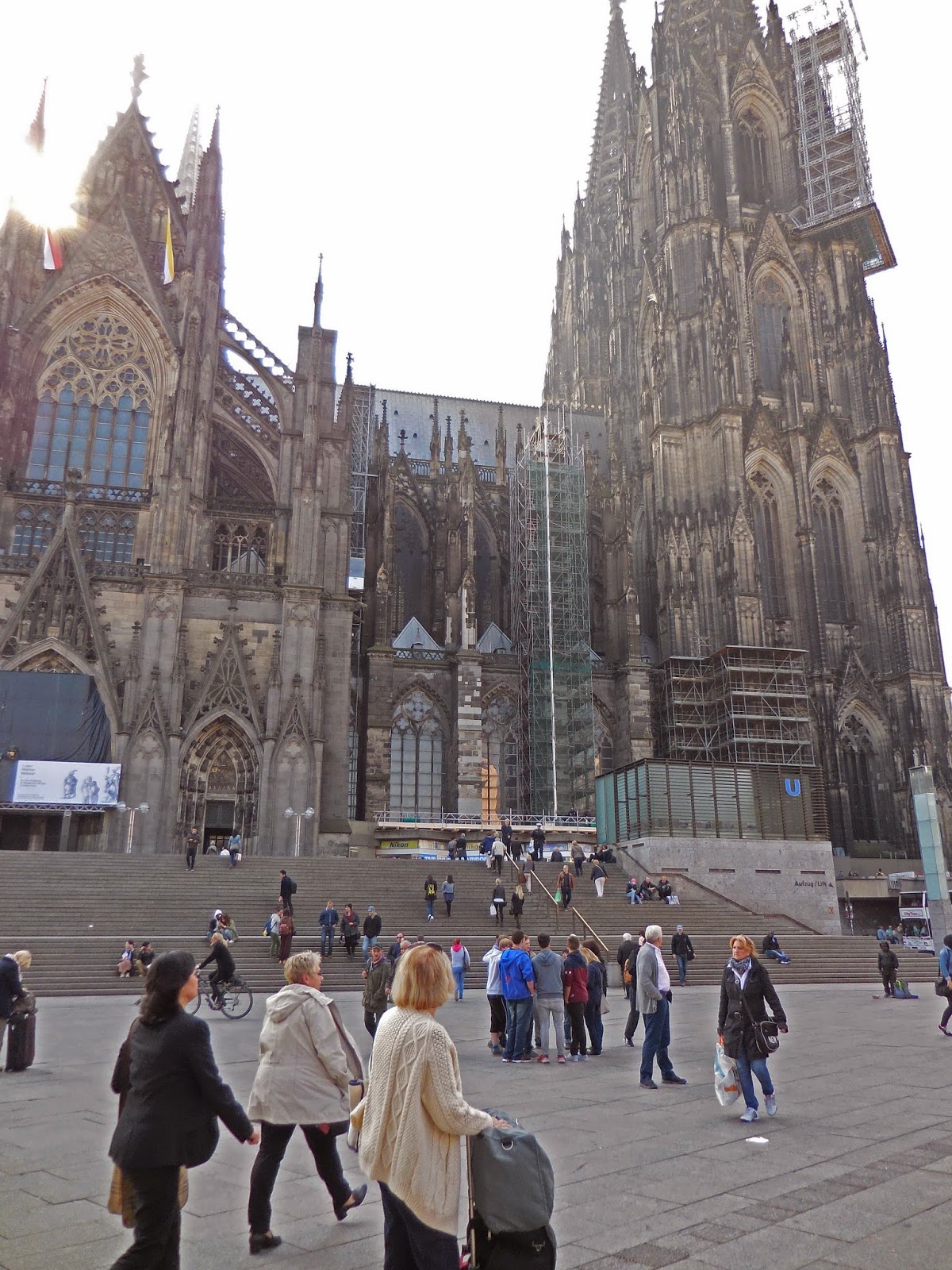 No trip to Cologne is complete without going up all those stairs and  inside der Dom. 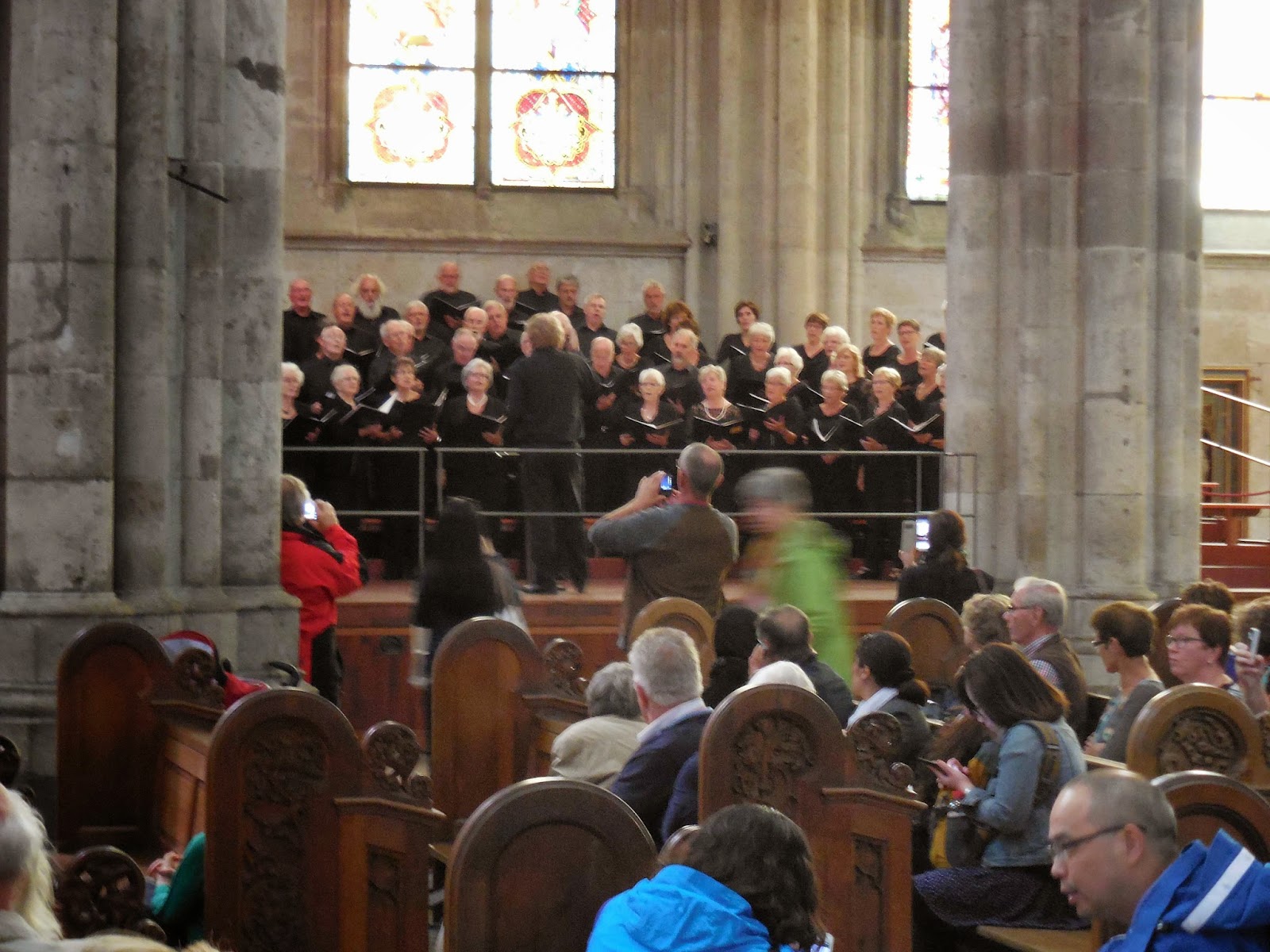 We were lucky to happen upon a concert given by a choir from the Netherlands. 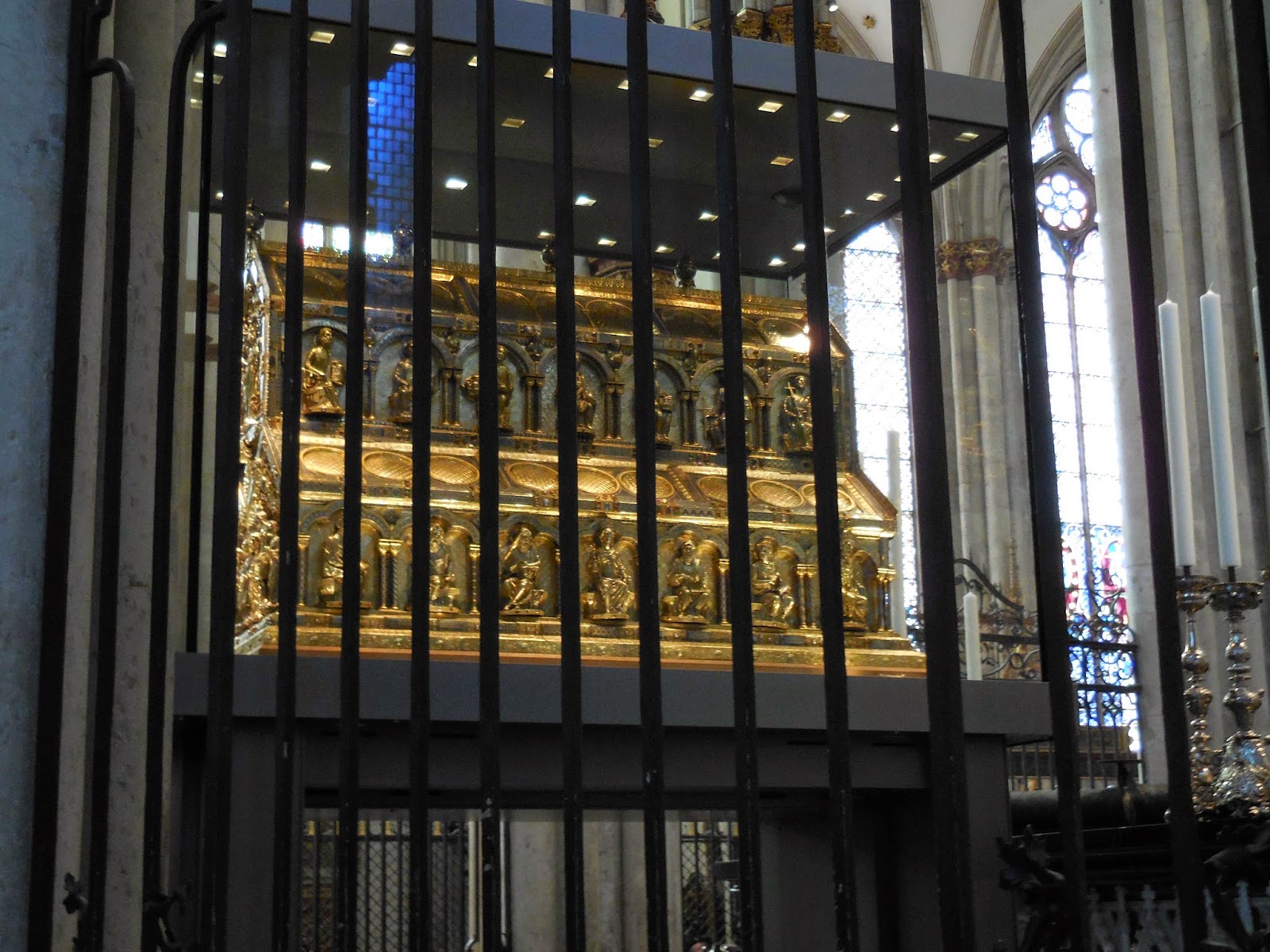 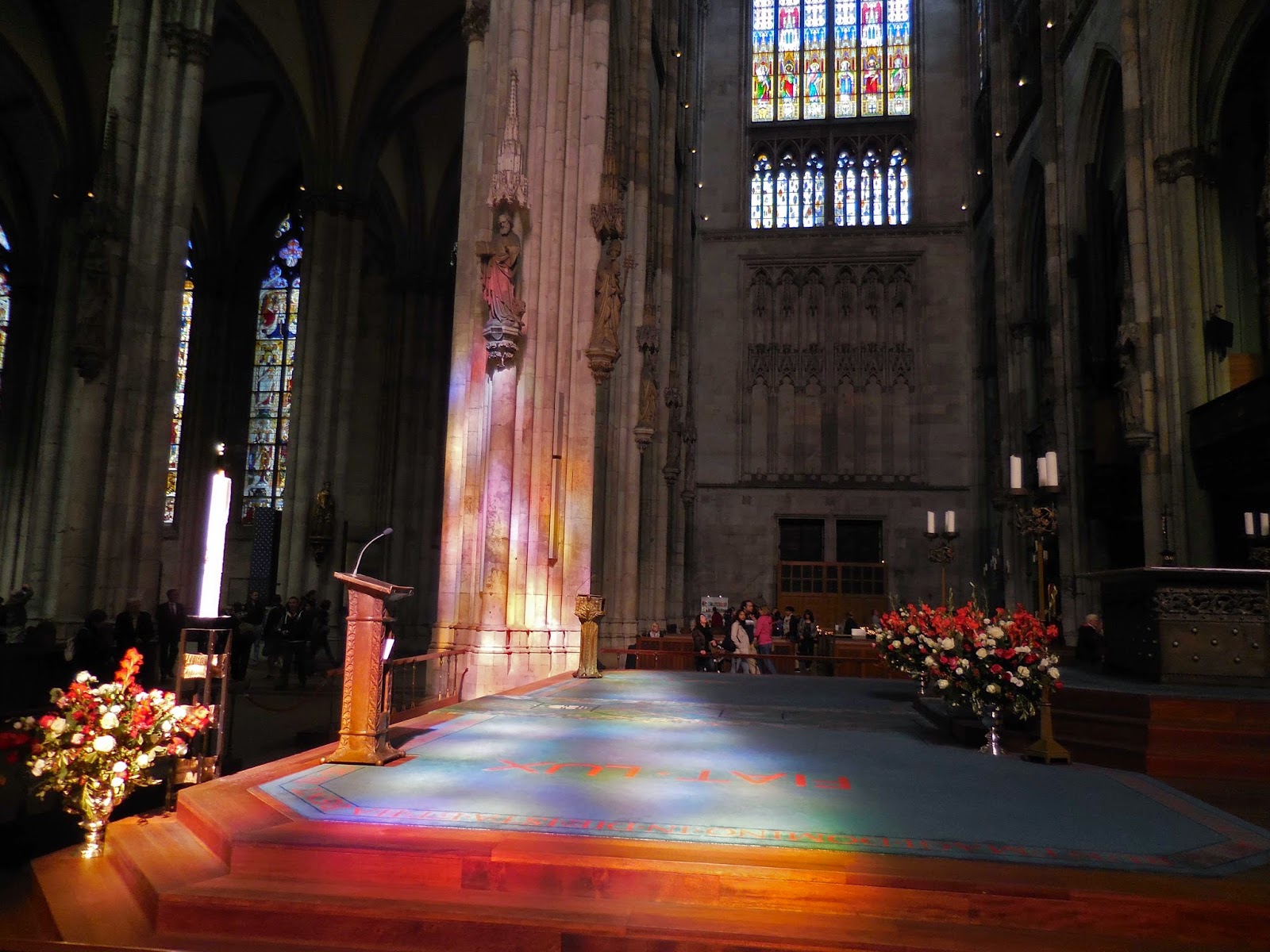 .
The reflection on this altar is from the new and controversial modern stained glass window. It was nearly impossible to photograph, but the reflection was cast everywhere, even on the pillar. 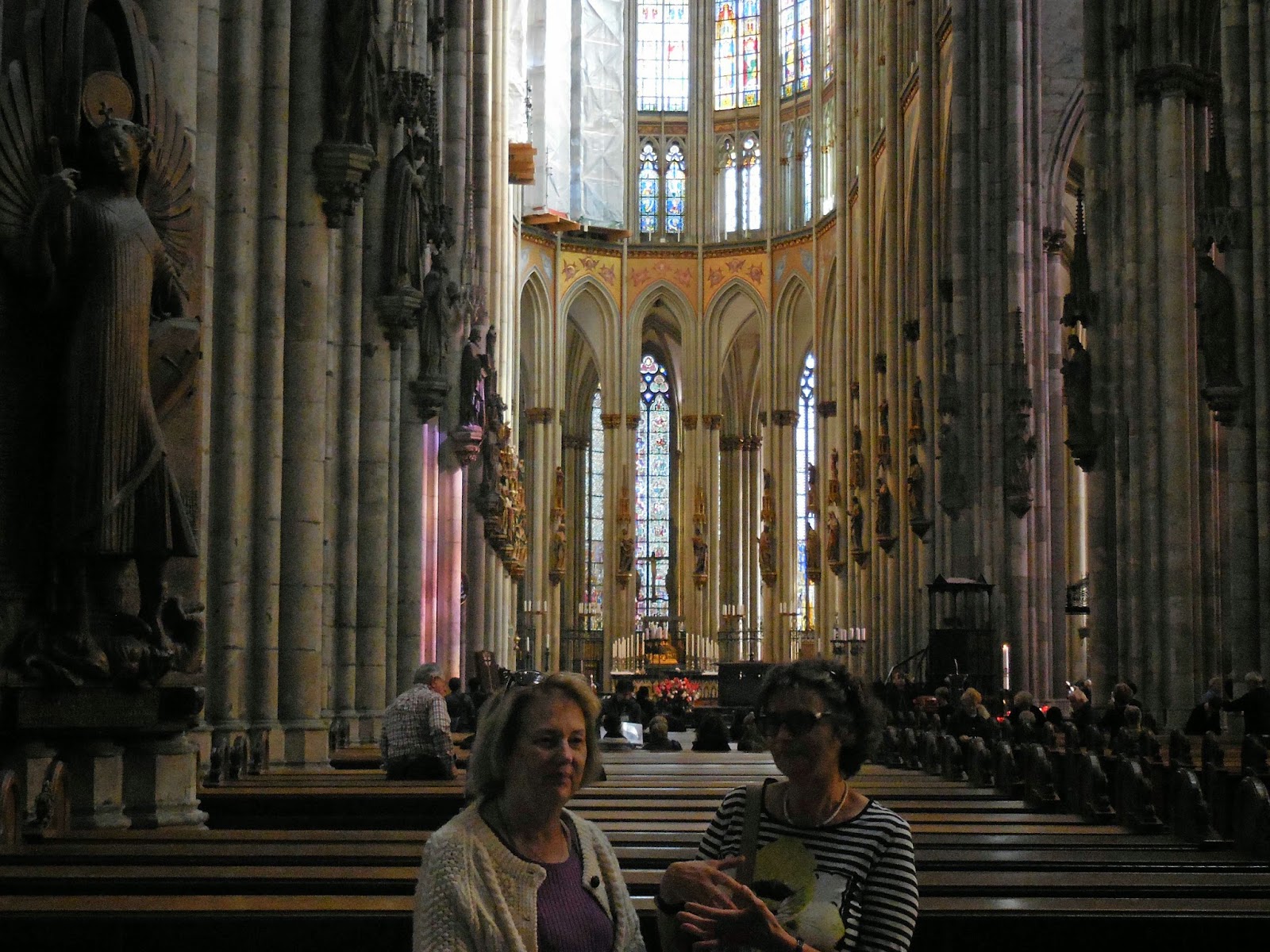 The magnificence of the European cathedrals never fails to amaze me and causes me to reflect. And to think they were made without modern machinery also! 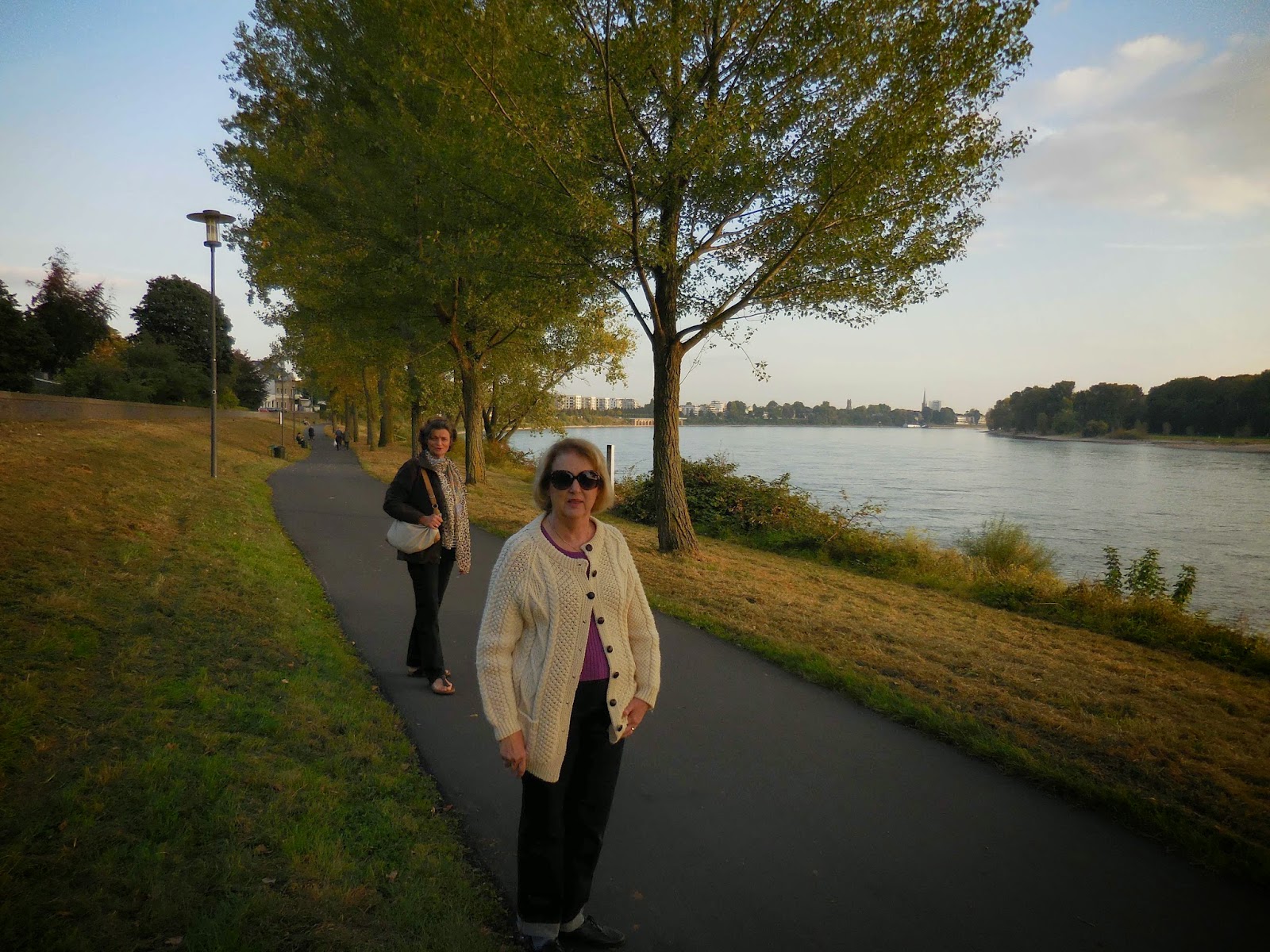 Our day ended with a pleasant walk along the Rhine River followed by a wonderfully relaxing meal that included pumpkin soup. 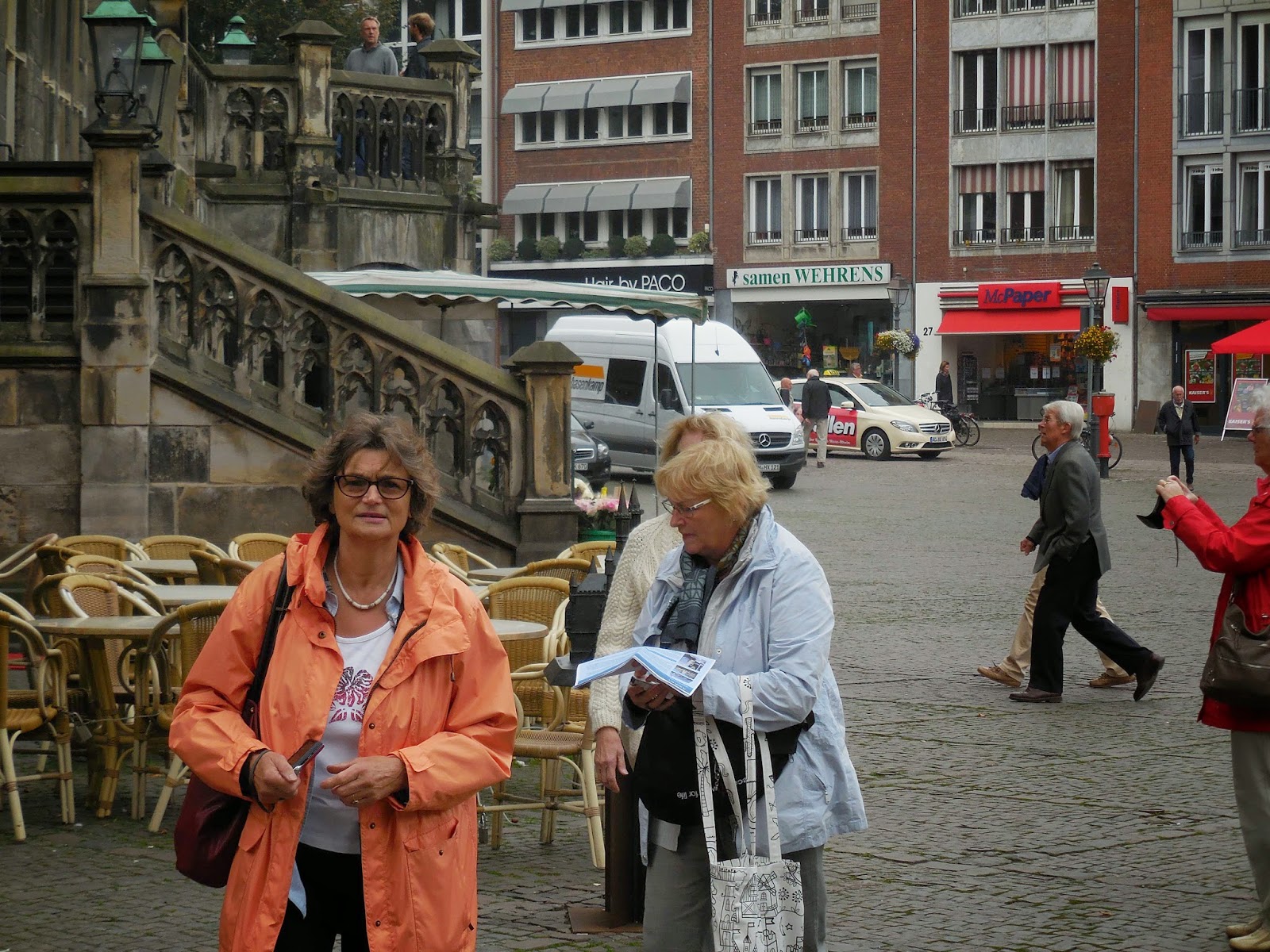 The next day Monika and her sister, Ulla, took us on a car trip to Aachen, which is near the border between Germany and the Netherlands. 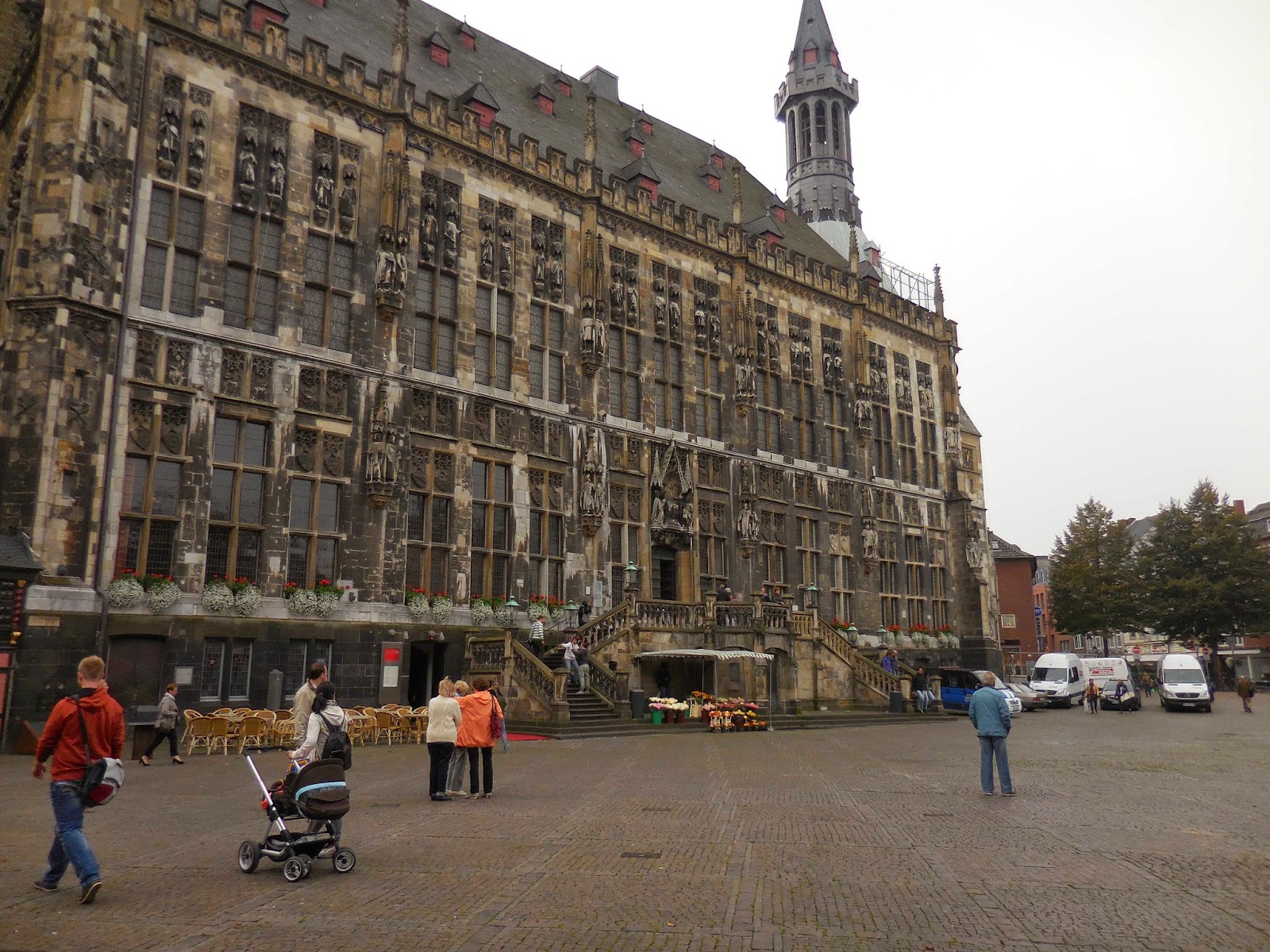 It is also where Charlemagne is buried. This is the city hall. 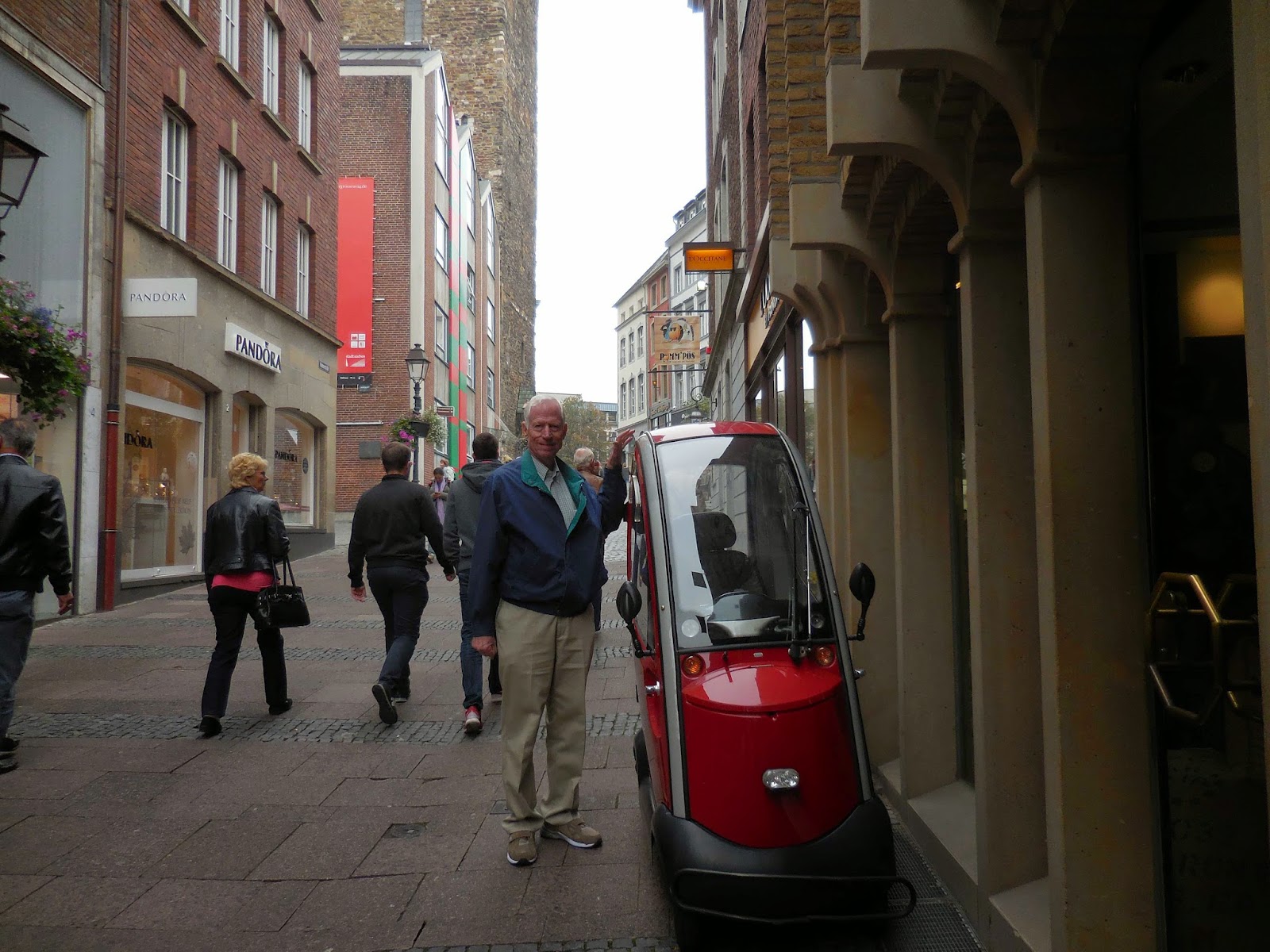 Can you imagine riding in this little car?  It makes a Smart car look roomy! 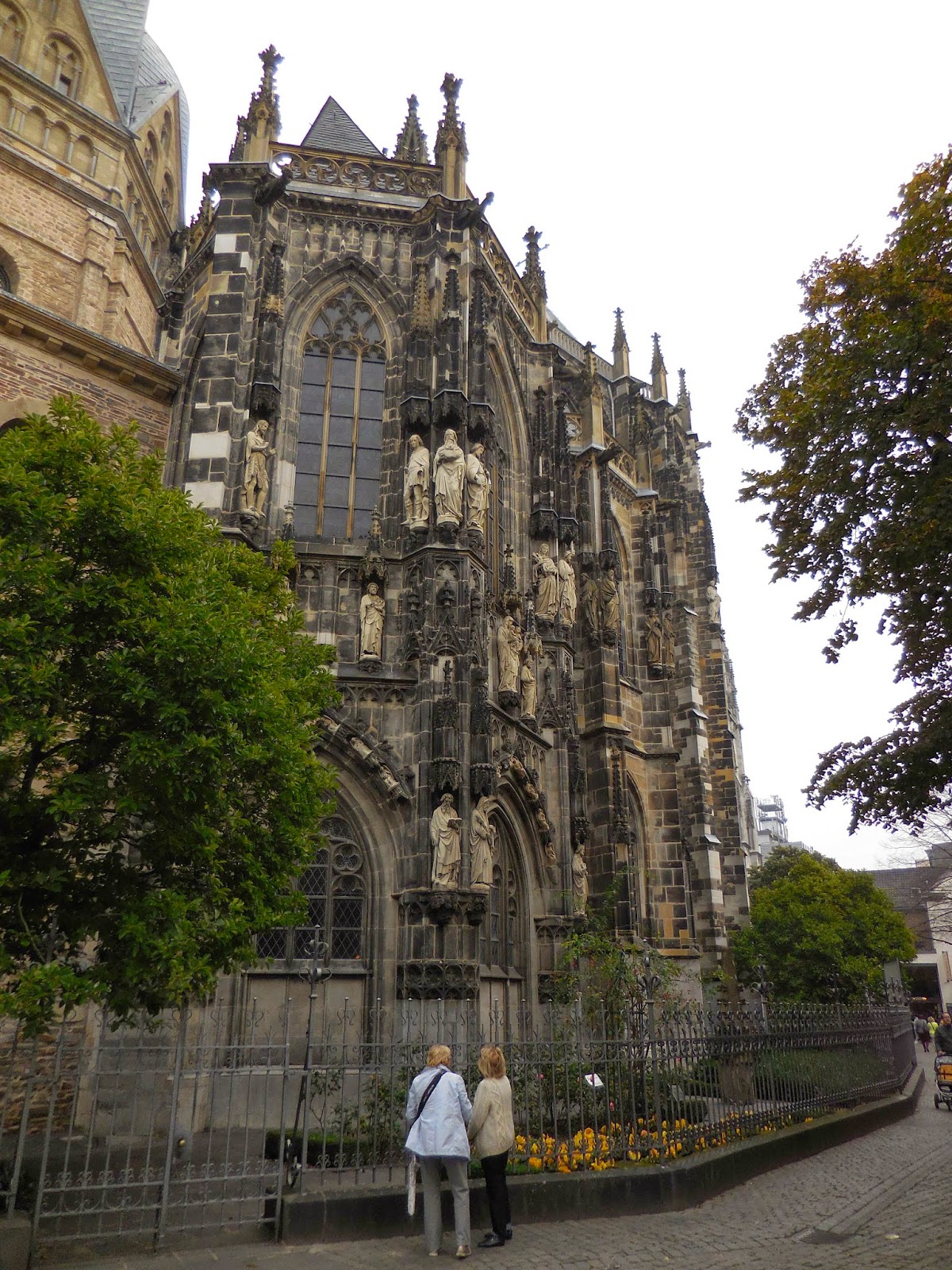 Charlemagne or Karl der Grosse as he's known in Germany is buried in this church. 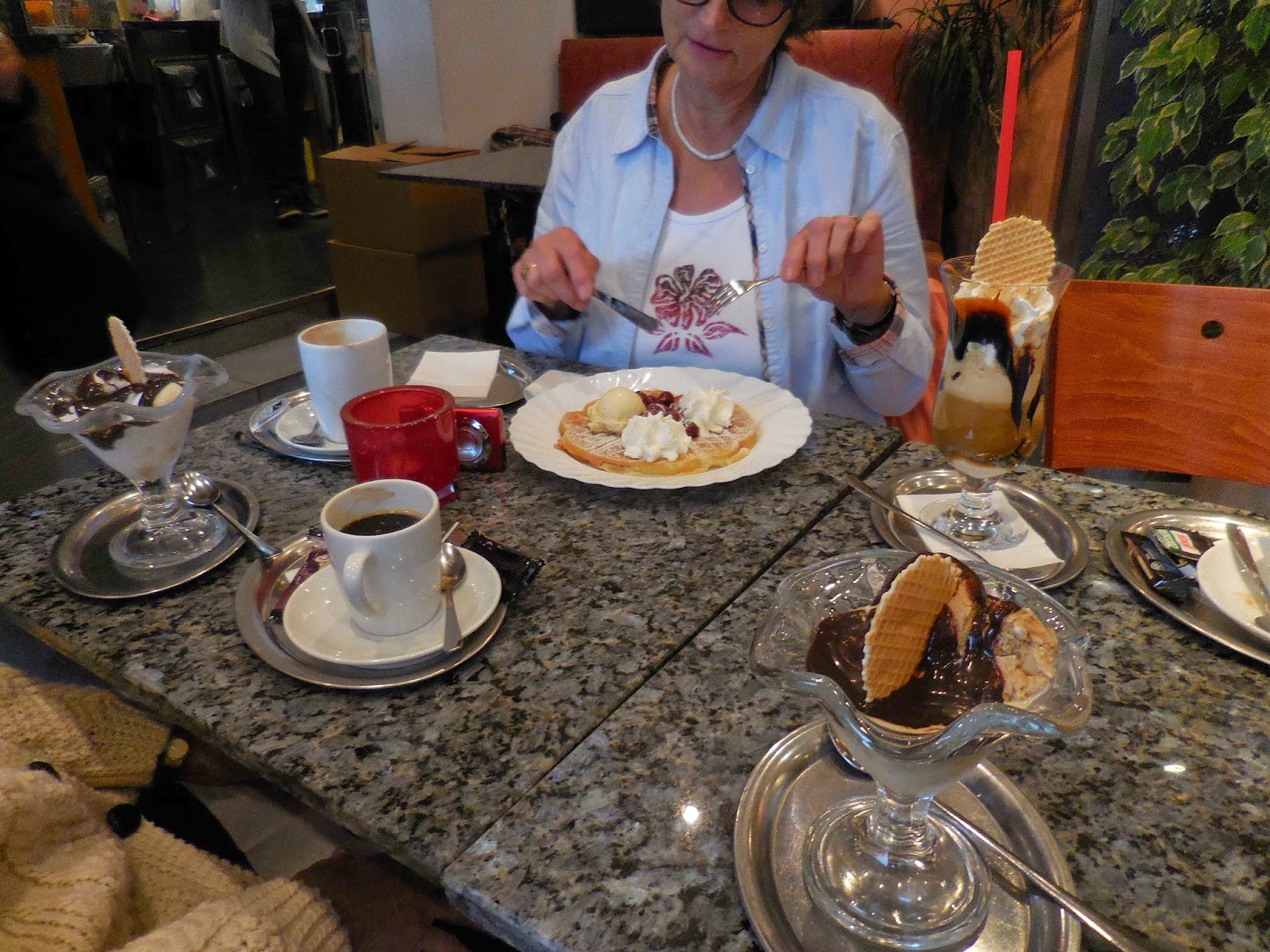 We took time out from sight-seeing to have a yummy snack. 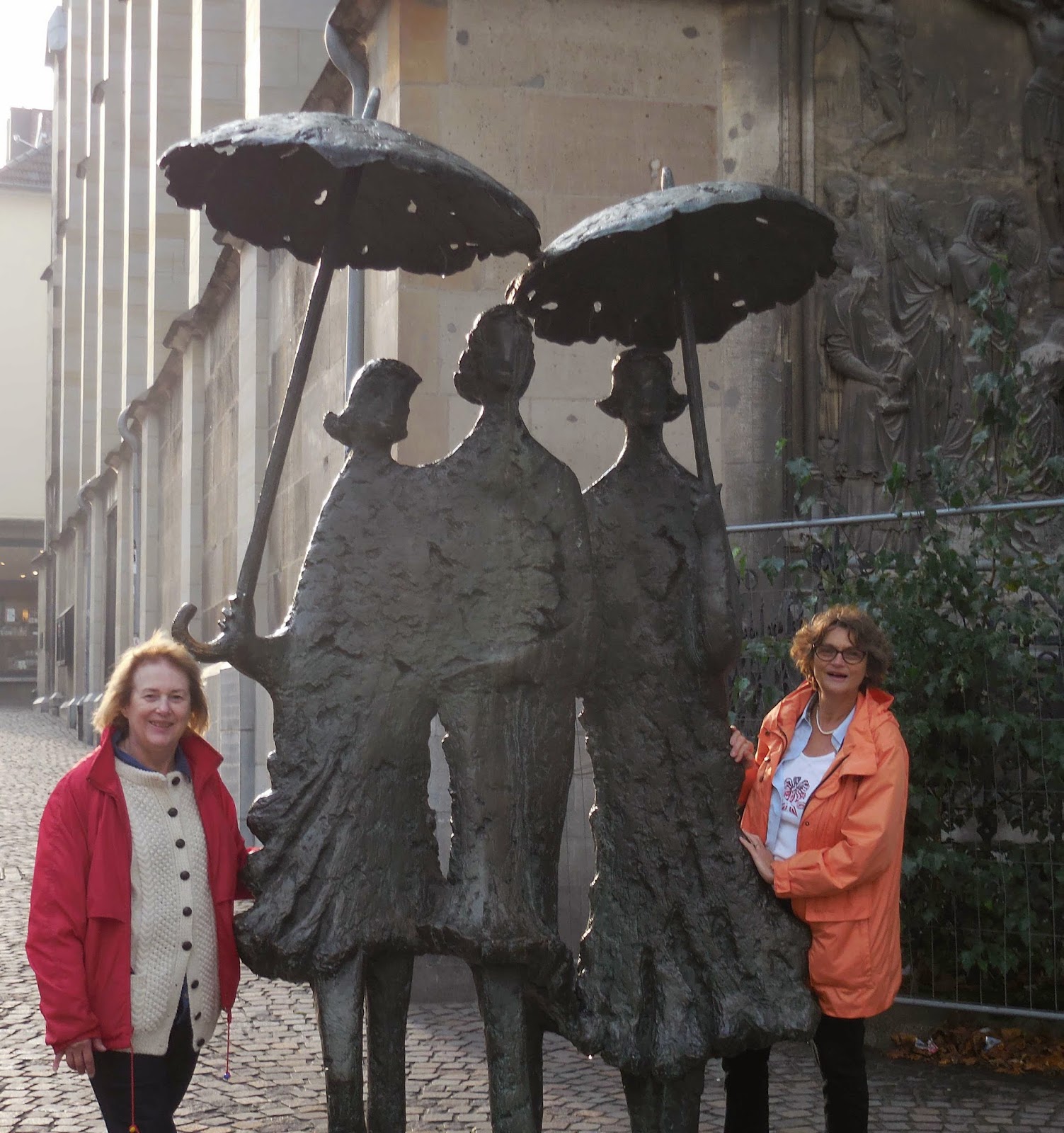 And then we found this fun statue. 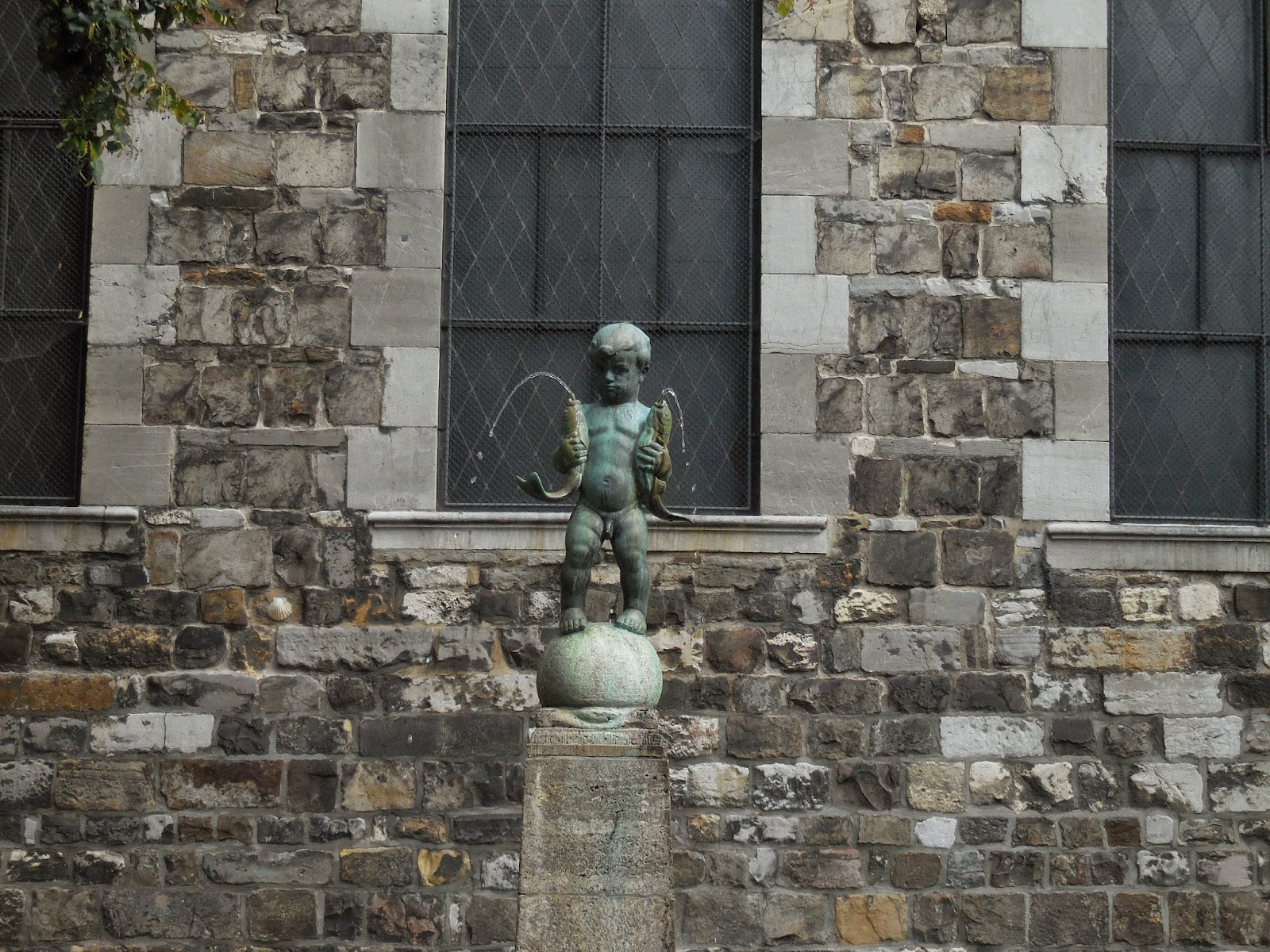 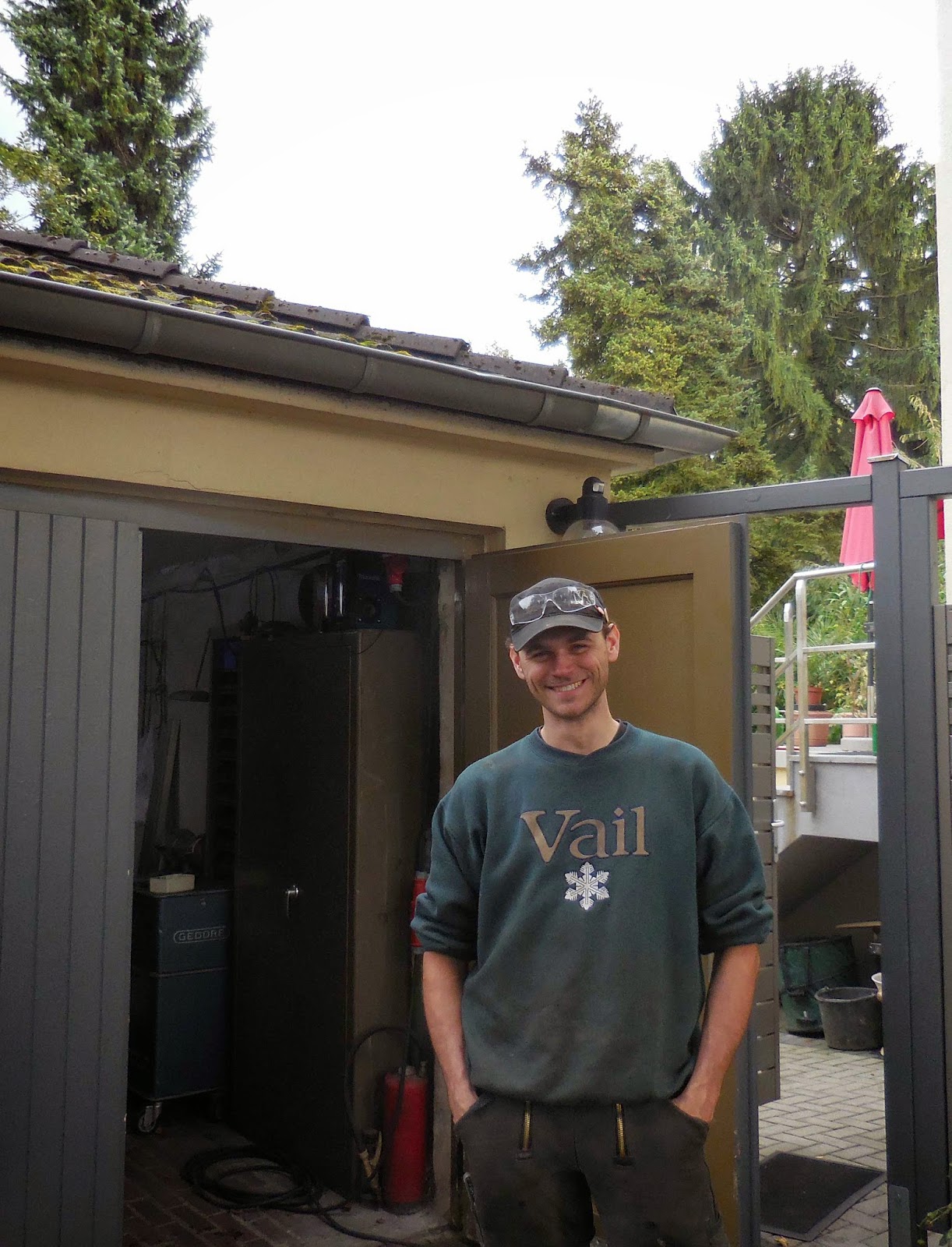 The next day we had fun chatting with Sebastian, Monika's younger son, who stayed with us for a week when he was only 16. 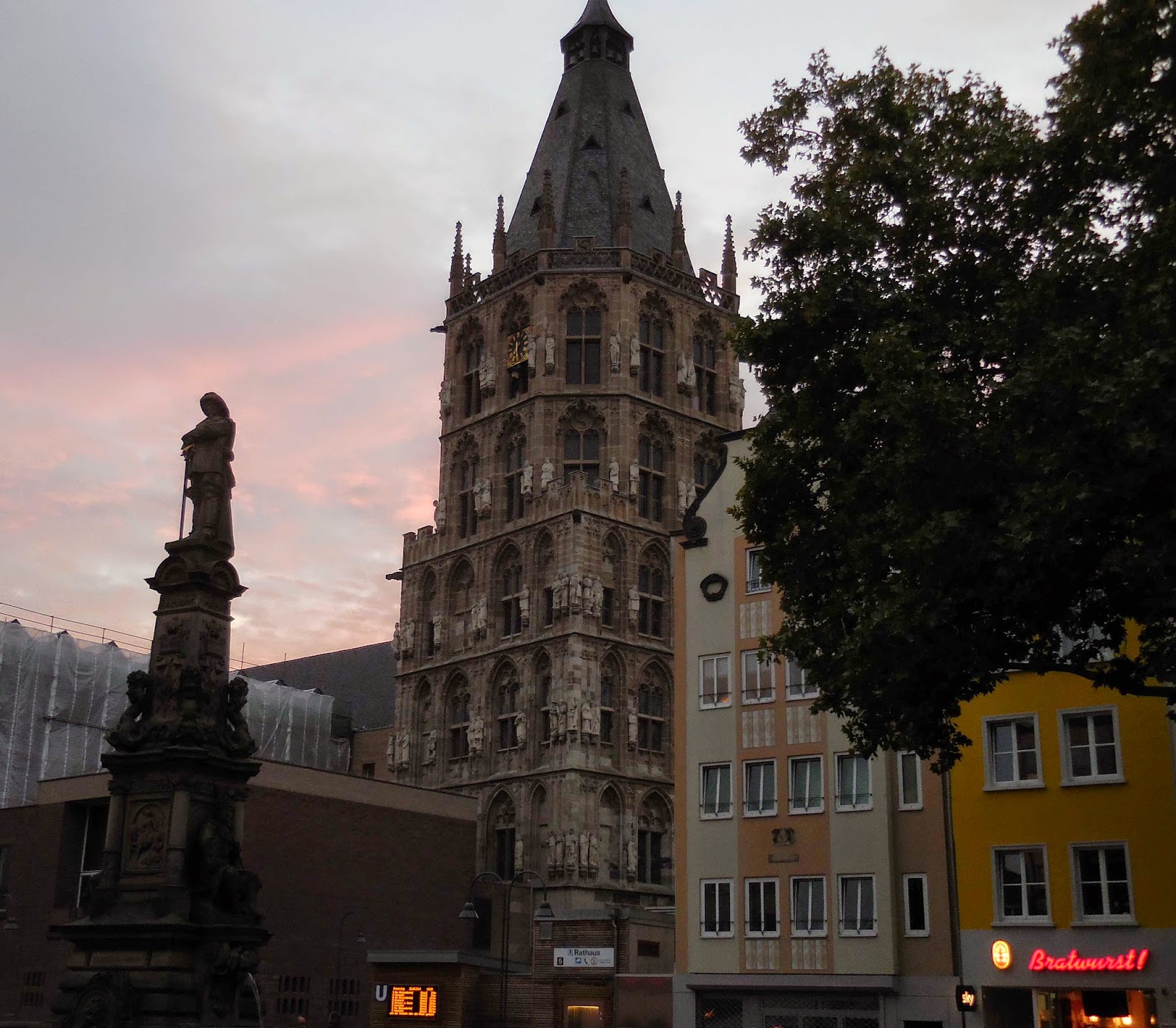 That evening we went with Monika to Cologne's Old Town to celebrate her birthday. 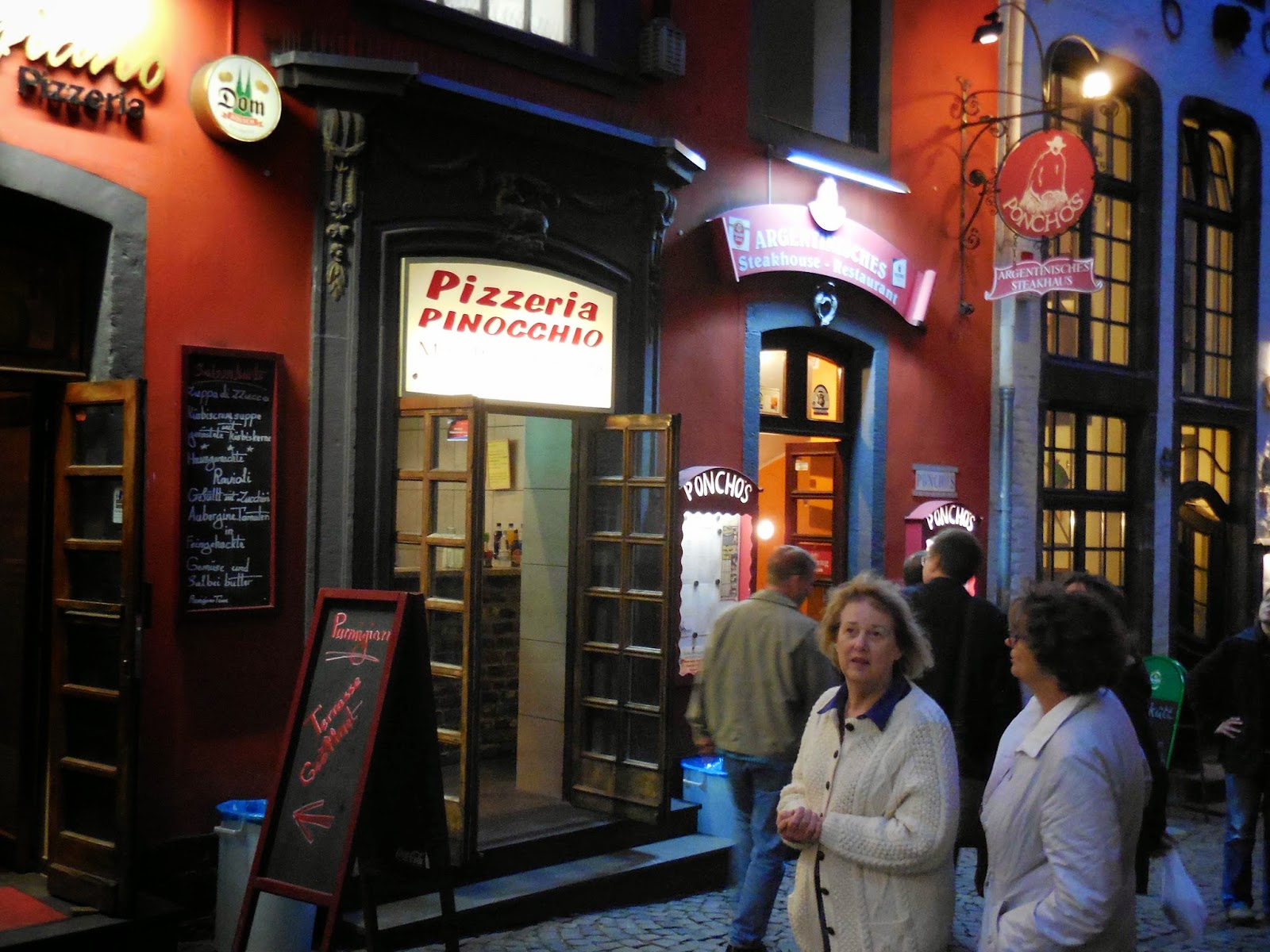 On the way to our restaurant on the Rhine, we passed Catherine's favorite pizza spot, Pinocchio, where she learned to like Spinat (spinach) pizza. Then all too soon, it was time to say "auf wiedersehen" and head to Leipzig.  More on that later. 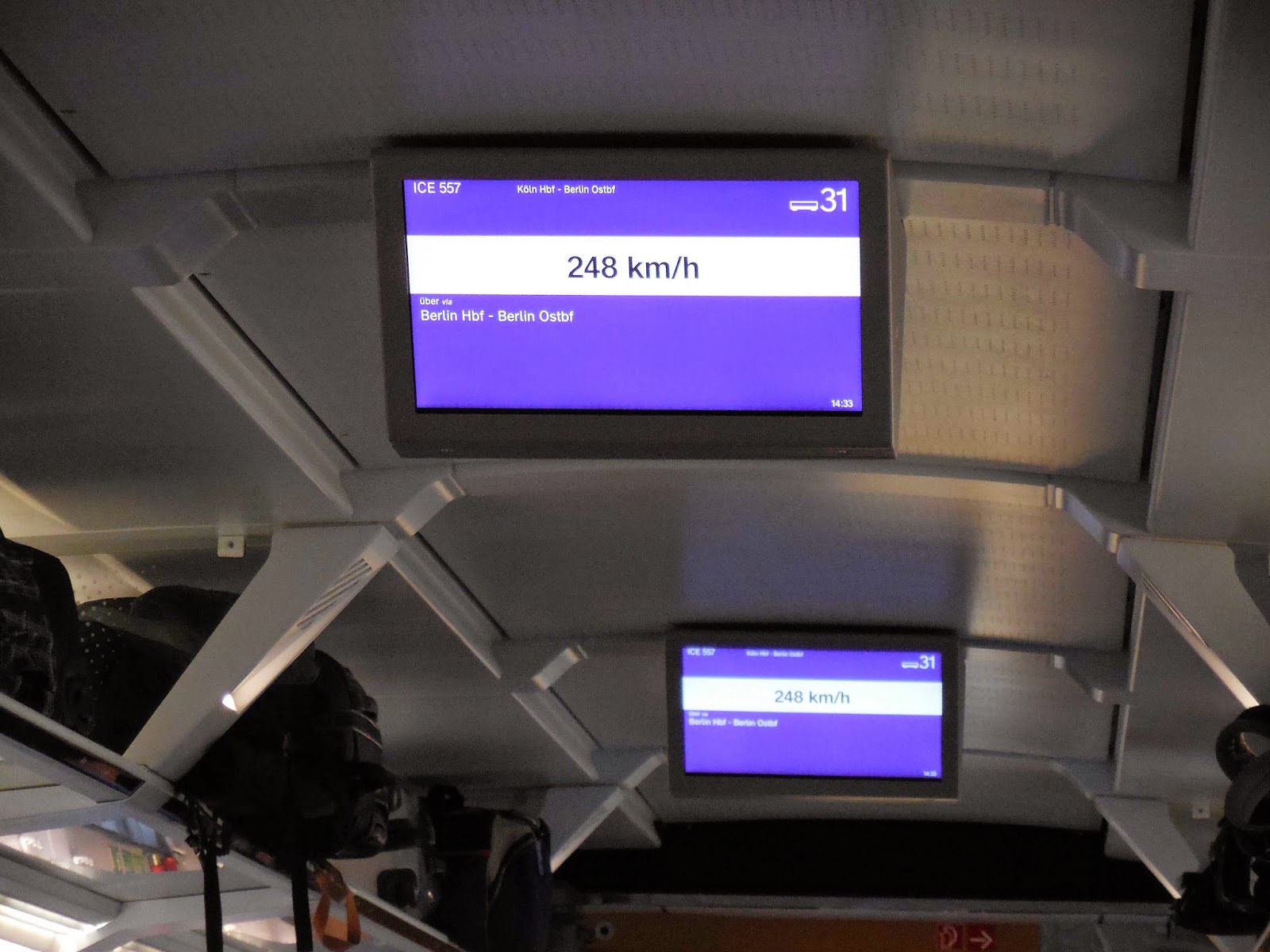 What an amazing trip you had! Thanks for sharing your photos.

I want to live in the little house in the first picture. LOL

BUT, I DON'T want to drive the teeny tiny car. That is frightening!

Your pictures are amazing. The churches are so beautiful. Glad you could catch up with friends. That always makes the travelling much more fun.

I don't think you'll ever forget that adventure! lovely photos of where you've been :)

I'm enjoying your pictures so much , thanks for sharing.

My goodness that train station is amazing!
I love all your pictures and the story of each picture

You saw and did some wonderful things! I love trains and would give anything if we had a good, reasonably priced, train system here. I have to drive almost 200 miles just to find a train station!

Good to know that if I were hungry, I could at least find a pizza place. =)

Thanks for taking us with you. I loved taking the train in Europe. It looks so fancy now! I am enjoying your holiday photos and recap so much. Can't wait for the next post!

What a wonderful trip! Your photos are lovely. Thanks for sharing.

Oh Judy, this looks so wonderful. Interesting, beautiful. I'd love to visit the cathedral. And to think that Charlemagne is buried there! Love the photos. What an experience!

What an amazing trip!
Hugs,
Meredith

Oh wow! The architecture is spectacular! Thanks for the tour. It sure looks like fun. Love all the history.

I love that enormous cathedral in Cologne. Did you notice the mortar chunks (if that's the right way to say it) where the church was relentlessly bombed in WWII? Really something. And how lucky were you to see a concert!

Great connection to have in Europe. Coincidentally our eldest was in Germany for an exchange in the late 90's and we have had time with the parents on both sides of the pond.