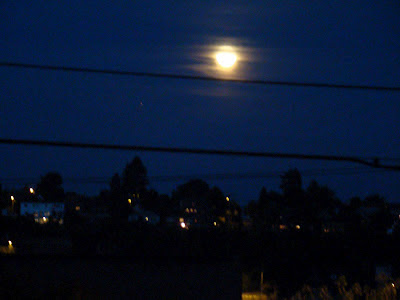 .....do we have current photos of all four grandkids at the same time! (Did you see the moon? It has been beautiful the past few nights.) 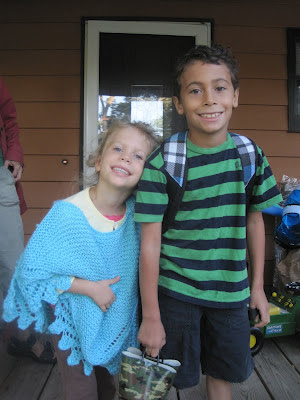 Here's David on the first day of school.  He's a big second grader now! (It's finally been cool enough in Chicago for Sophia to wear the poncho I knit.) 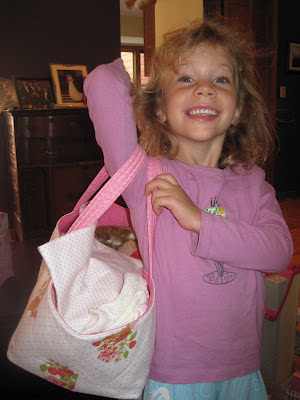 Sophia  loves her new doll carrier.  Although we have heard, that Red Bear has taken it over. 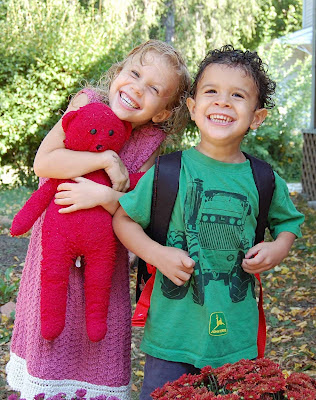 Daniel and Sophia seem quite happy that Daniel's at last old enough to go to preschool. (This is the first time I've seen a photo of Sophia wearing the dress I knit.  Looks like it'll fit a while! ) Thanks for these photos, Jill and Michael. 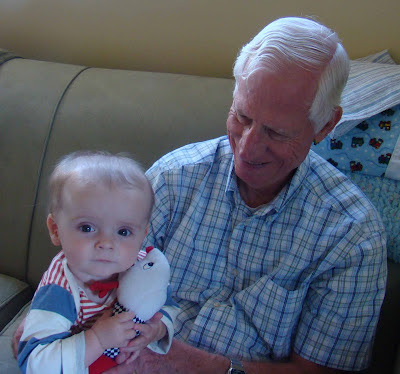 Photos of Opa are rare indeed, as he is the usual photographer-in-chief. Max was having fun looking in Opa's pocket.

Beautiful and happy grandkids. Look at all that wonderful knitting you have done for them. That dress is impressive. My hubby was out taking photos of the moon too. I shall go and post one on my blog so you can see what the moon looks like in Oz. :-) Same as your place.

Max has captured my heart!

The knit dress is adorable, and it's sweet that she is wearing it.

Great photo of the moon. I never think to get photos like that.

All the grands are so adorable! So glad that Sophia likes the carrier...there may be enough room it for her doll and Red Bear! Have a great evening! Love the knit dress by the way...so cute!

Oh that Max and Opa combination is pretty irresistible! I see you've been busy knitting and sewing. And that crocosmia is a beautiful plant!! I love the colors of the leaves and the flowers..stunning!

Love the photos of the kids they all look happy and healthy! I cannot wait for the cooler weather to arrive here :) Have a lovely weekend!