We had a whirlwind weekend. My sister and her hubby were in town, enroute home from their Alaska trip, and we had a fun and busy time together. On Friday night we had a backyard barbeque in the rain with our kids, and then on Saturday we got up early to watch the end of the Rock 'n' Roll Half Marathon because our son and Erik were just two of 26,000 runners. Some of the full Marathoners finished a little after Carl and Erik, who both finished their half in a bit under two hours. 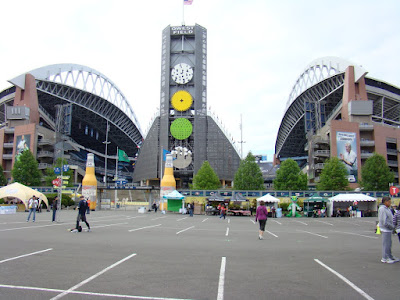 The End of the Race 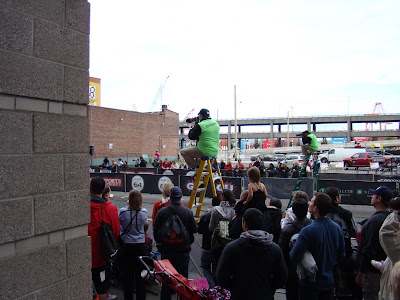 Near the end of the race, the runners headed onto the Alaskan Way viaduct, a double-decker freeway above the waterfront. 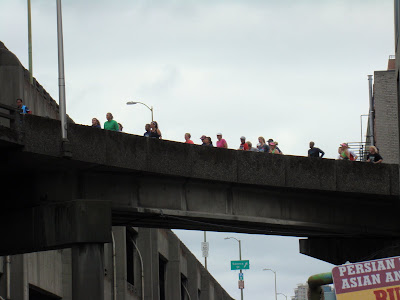 The Home Stretch on I-99

I overheard one obviously out-of-town runner complaining about the hilly route. The native runners know it was a "flat" race compared to what it could have been had the route followed the "real" hills of our city! Just ask anyone who's ever walked from the waterfront up to 3rd Avenue. 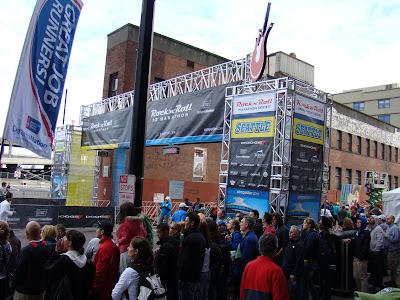 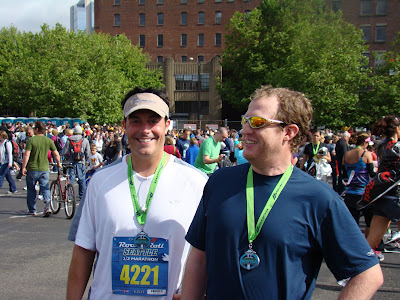 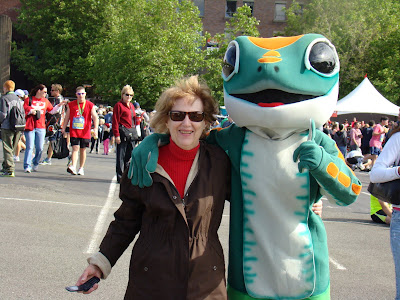 After the race, we all went over to Catherine and Brent's condo for a yummy brunch. Walking back to our car to drive over there, we stumbled upon at Occidental Park in Pioneer Square. It's part of the Artsparks exhibit. 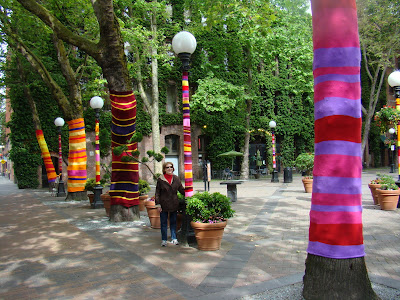 It really is cold here in the summer!

Later that afternoon we went over to Magnolia so that Jane and Ted could see Catherine and Brent's new house. They will move in late summer. 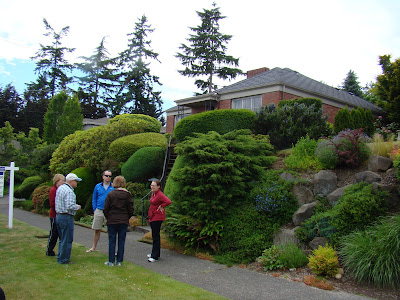 On Sunday after singing in summer choir, we headed to Winslow on Bainbridge Island. It was a perfect day for a ferry ride and a perfect end to the weekend. The water tank in the distance is at the end of Catherine and Brent's block. 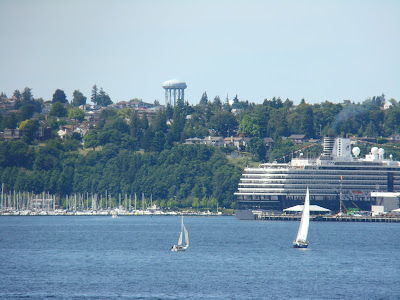 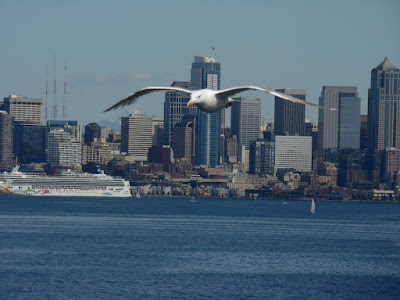 Seattle in the afternoon sun

Jane and Ted are back in Minnesota today with lots of stories to tell as they head north to their cabin on Side Lake.
Posted by Judy S. at 8:02 AM
Labels: family and friends, ferry, knitting, race

Sounds like a nice weekend! I love that last picture of the seagull and Seattle in the distance...really cool!

I've been thinking about you Judy! Glad you had fun with your family. We could see the runners on the viaduct from our hotel room facing Elliott Bay. I loved the weather everyday we were there! We also went over to Magnolia to look at houses...it's a lovely area. We are at Sleeping Lady right now, and back to the dreaded desert heat tomorrow night. :-(
I love your shot of the seagull with the city in the background. :-)

Definitely a fun-filled weekend!
Thanks for sharing the pics.

I might also add that anyone who has driven a car with a clutch will testify to Seattle's hills!

Sounds like a great weekend. Are those trees yarn-bombed??? LOL

Hope you are well and had lots of fun,after this weekend Judy. ;-)
Great pictures and impressions

Nice pictures. Looks like you all had a great weekend.

Yes, hills it is! Glad you had fun Judy! I love those city views. Seattle is such a fun city! Pam

I always so much enjoy your photos!

How gloriously cheerful are those yarnbombed trees!