Seafair weekend in Seattle means the Blue Angels are in town, the hydroplanes are roaring, and the traffic is terrible, even worse than usual because of bridge closures. We can just go up the nearby Somerset hill to spot these flying daredevils; sometimes they even fly right over our house! This time we could see them over the city at a distance. Can you see the Space Needle? 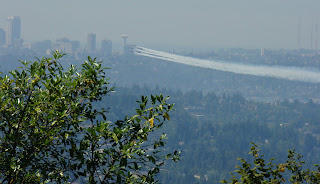 Flying High over Seattle
On Thursday when I was tutoring, the Blue Angels were practicing their stunts and flew right over our heads. It was ear-splitting! They didn't come nearly as close on Saturday, but Dick did catch some good shots. 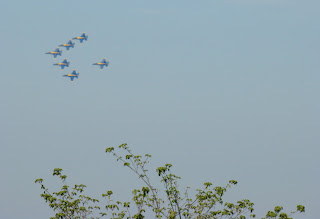 In Formation
They flew overhead this time but so fast it was hard to capture. 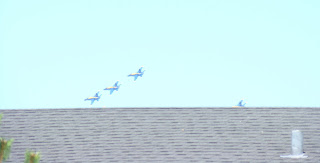 To escape the heat, we can either go into the city and stroll the waterfront, or we can head to the mountains. We chose the latter and drove north to the Mount Baker national forest and found SNOW! Mount Baker, one of our slumbering volcanoes, is north of us, almost to Canada, and looks like a giant ice cream sundae from a distance. An article in Sunset magazine reminded us that the drive through Deming, Maple Falls, and Glacier was very pretty. The view of Mount Shucksan from Picture Lake appears often in travel brochures. 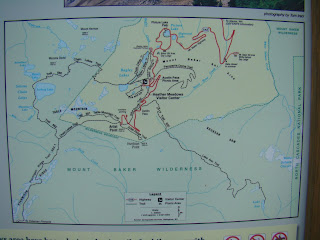 We walked the path around Picture Lake before heading up the winding "red" road with its sharp curves and steep dropoffs to Artist Point. 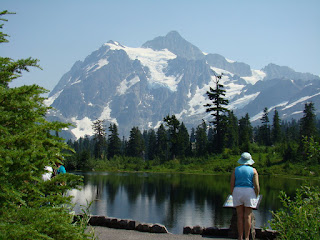 Picture Lake
Artist Point is tucked in a saddle between Mount Shucksan and Mount Baker and provides stunning views in all directions. On the other side of the parking lot off in the distance was the top of Mount Baker, still so snowy and white. 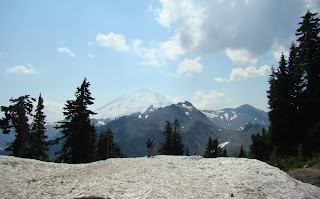 Way down below and far away, Baker Lake sparkled darkly in the haze, and across the valley below, we saw this interesting view. Was it water or wind or both that caused these peaks to form? 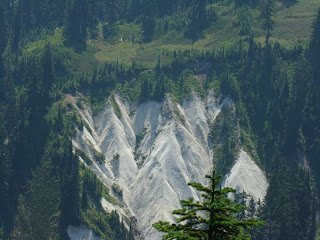 We saw glaciers and rocks, birds and flowers. 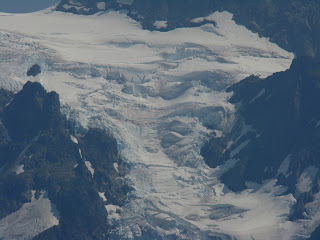 Up Close on Mount Shucksan
Pillars like these are everywhere and reminded us of Devil's Postpile in California. 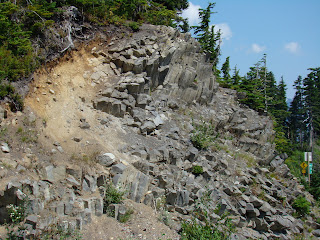 We saw green huckleberries, spirea, and other flowers along the roadside and lake path. 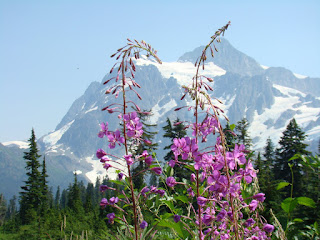 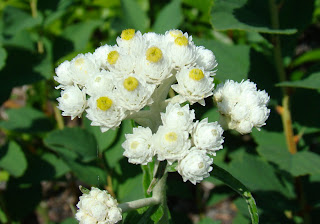 This friendly fellow was hoping for a handout. They are brazen and will sometimes swoop right down and steal your sandwich; that behavior has earned them their "Camp Robber" nickname. 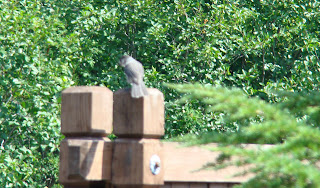 Yes, it's been hot here in the Pacific Northwest, but we had a very COOL weekend!
Posted by Judy S. at 8:33 AM
Labels: photos, travel

Wow, what beautiful pictures! I love watching the Blue Angels and they are noisy! Those pics of your getaway are fabulous, what a wonderful place to escape to!! Thanks for sharing!

Lucky gal. I was staining logs and watching the races through the window. Thanks for the wonderful trip to Baker! I feel refreshed and ready to take on another day of staining. Sharon

Wow! Now I want to visit Washington even more, how beautiful it is. We live by an airport and see the Airfest right over our home too with the stunning Blue Angels. Thanks for sharing

Your photos are beautiful! When I was a kid I lived near a Navy Air Base. We saw the Blue Angels every summer --- they practiced over our house too.

Love your new banner! The roses are a beautiful color.

How lucky are you to live near such breathtaking scenery....amazing photos.

Thanks for sharing how beautiful the mountains are. A great place to escape the heat. We are experiencing an unusually cold summer with record low temps.

thx for sharing your beautiful photos! Wow! So lovely : )

We have the "Thunderbirds" stationed here at HAFB, so we are treated occasionally with fly-by shows and all to often with just plain noisy F-16s!

Beautiful pictures! I'm glad you found a place to cool down. I visited Portland and met up with a very rare 106 on the temp!!

I think you live in one of the most beautiful places on earth. PLUS the Blue Angels?? Did you buy a lottery ticket this week??

Beautiful country out there, Judy. Glad you finally got a break from the heat!

What stunning photos Judy...they are a joy to behold!!! You are a very lucky lady. The 'picture lake' is a very special view (and is that you?)

In America you have the Blue Angels? We have the Red Arrows in England; very similar I think.
Linda ♥